Syrian government forces have made modest territorial gains of 0.4% since the beginning of Russian airstrikes, with territory controlled by the government growing by about 120km2 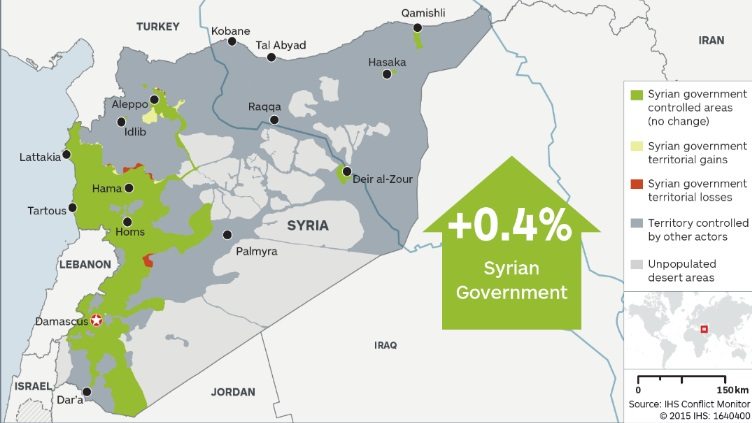 The Syrian Army, backed by Russian airstrikes and various Shia militias under IRGC command, made net gains of around 240km2 against Sunni rebel factions, but suffered net losses of 120km2 to the Islamic State in the period from 29 September to 16 November 2015, according to the latest estimates by IHS Conflict Monitor.

Although the government has made notable gains south of Aleppo city, and managed to break the Islamic State siege on Rasin al-Aboud Airbase, it has suffered set-backs to Sunni rebels on the Hama front line, and the vital M5 highway link between Damascus and Homs has come under increased threat from Islamic State advances in recent weeks.

IHS analysis of cumulative government gains and losses showed a steep decline in territorial control between October 2014 and September 2015, which is likely to have influenced Russia’s decision to intervene militarily in the conflict.

This trend was reversed in October 2015, likely as the result of Russian air support providing renewed momentum for the Syrian Army. However, preliminary data for November indicates that government performance is flat-lining again.

On 17 November, Russian state television showed a map during a briefing at the Defence Ministry headquarters, which appeared to feature a reference to a Russian artillery battery deployed near the town of Sadad, around 50km south-east of Homs city.

Sadad is the last remaining government-held town between the Islamic State, which has made significant gains in Homs province in recent weeks, and the critical M5 highway.