In an exclusive interview with Play the Game, a former match-fixer tells how effectively criminal syndicates are still manipulating sports results despite all initiatives against it. The whole approach against match-fixing could be wrong, Declan Hill reports.

The knock came late at night. Marko Stanovic – whose name has been changed to help protect him from the mob – was in one of the world’s great match-fixing gangs. A group whose criminal ties stretched deep into the world of tennis, volleyball, basketball and, of course, football. They were fixing matches at every level of international sport for over five years and Stanovic was an important part of the gang.

Then 250,000 dollars went missing. It is unclear where it went. Stanovic claims that he lent the money to a colleague, who promptly disappeared. The senior figures in the gang did not care. They knew that a lot of their money had vanished and Stanovic was the last person who had the money. They were really not happy with him.

So, Stanovic headed for the hills. He ran away from Sofia, Bulgaria, where he had been happily corrupting international sports for years, and into a small village in the countryside. He lived there, keeping his profile very low, until the knock on his window.

“Hey Marko!” said the happy drunk who had walked up from the one pub in the village and was now banging on his window. “There are a couple of rich guys from Sofia. They have a BMW and they are looking for you. Shall I tell them where you are?”

“No, no, no!” said Marko scrambling around the room shoving his passport and any money he could find into his suitcase. “Tell them I am just coming to see them. I will be there in twenty minutes.”

A race across Europe began with Marko in the back seat of taxis scrambling across borders just ahead of the pursuers. He has never spoken publicly before. His identity and current location are not revealed but Play the Game has spoken frequently with him, checked his criminal background with law enforcement officials to confirm both his identity and story. In the midst of his pursuit he sent this correspondent a number of documents. In one paper, he outlined his concerns around one particular Serbian match-fixing gang. 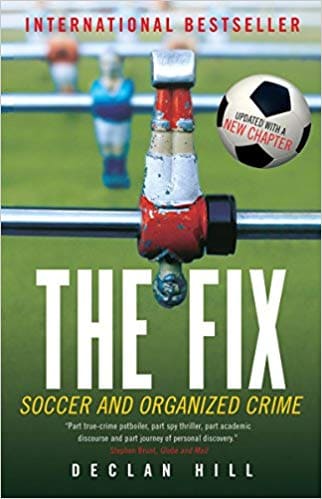 “They have lots of connections to the Asian betting markets. In football, they place bets for the highest profile teams in the Serbian SuperLiga. They also do the same service for many other high-profile teams in Croatia, the Czech Republic, Montenegro, Ukraine and many other countries. They are a really powerful organization who is tightly connected to mafia and other crimes.”

He writes that they took over the financial betting route pioneered by the famous Singaporean fixer Dan Tan,

“They have a list of also low-profile teams and players so they can ‘fill the gaps’ between big events. Basically, they have an event every day, mostly team sports: Soccer, basketball, volleyball, handball, futsal and other sports. I am honestly afraid to tell more about this organization. What I can tell is that they operate with millions (of euro), a lot of sport teams and officials (referees and other), and traders companies to get corners and other things manipulated. This organization is prone to violence.”

After considerable negotiation we agree to meet in a dark room at the back of a bar, somewhere in Europe. Stanovic is a good-looking, muscular young man dressed in a dark t-shirt and jeans. He is nervous and puffs on innumerable cigarettes during a long series of conversations. However, the stories of fixing international sport come pouring out of him. A recurring theme in the conversations is how easy it is for match-fixers to corrupt sports.

“The players were approaching us… If we’re talking about tennis, sometimes we fixed more games than we could bet. We were in situations like, ‘Hmm I’m not really sure that I have time for this game. We could end up with 120, 130, 150 games sometimes per month. You can imagine, this is more than 50 players involved in this. And remember this is only one single syndicate.”

Stanovic’ interview is the criminal confirmation of the findings by the independent investigators commissioned by the ATP that reported there was “a Tsunami” of fixing in international tennis. Stanovic estimates that at their peak the various match-fixing gangs were fixing up to 30 games a day.

“We are fixers and we are here to rob you”

“There were two really powerful syndicates who were fixing an international volleyball high-level tournament. They fixed two opposing sides. It was a huge problem when everybody realized what was happening – both teams were trying to lose! The players are staring at each other across the net. They had to find numerous reasons for stopping the game because nobody was sure what’s happening on the other side. Volleyball players were thinking: ‘What are those doing?”

Finally, representatives of both sets of fixers met in the stadium and negotiated as to who would ‘win’ the fix. This being organized crime, the bigger, more powerful set of fixers won – so their players lost. However, they promised the other gang of fixers a favour to profit from another game.

This mutual cooperation among the gangs is a common theme in discussions with Stanovic. For example, when different groups are trying to fix lower-level soccer matches they work in the following fashion.

“What we do is we synchronize all of us and right before the whistle blows and we just bet absolutely at the same moment. Because bookmakers when they see the bets, they are going to try to limit or remove the bets as fast as they can… They know they cannot just ask (Sports) integrity (officials), ‘Please, please review this event because we need not to pay out!’ They know integrity is not going to do a lot. So, let’s say that the game will be over 2.5 goals in the match, meaning that the result will be at least 3-0…Every one of us has those markets pre-selected. When the lead bettor says, ‘Now we bet”, we all bet at exactly the same moment… We reveal to the bookmakers, “We are fixers and we are here to rob you.”

On another occasion, we speak of the future of American sports with the new legalization of gambling in that country. Stanovic is pessimistic that the U.S. can keep its sports pure, as America is transformed by legalized gambling or ‘a new form of fan engagement’ as its boosters call it.

“I haven’t really seen a country which was protected. So, I don’t see why any country should be excluded. I guess it’s bound to come. I mean you know how it works with any other thing. With drugs, with everything. If there is money, there is going to be people trying to scam.”

The response of the anti-fixing industry?
In the spring of 2019, there have been alleged match-fixing cases in Denmark, Belgium, France, Spain, Georgia, Iran, Brazil, Bulgaria and across Africa. It seems that for all the words, conferences and clichés match-fixing in modern sport has not been turned back.

When speaking to people like Stanovic or their counterparts in law enforcement, there is a clear gulf between them and much of the sporting industry’s response to fixing. In interviews with prominent investigators and fixers, they have spoken of how sports officials have, generally, not helped their investigations.

The sports industry has largely responded to the activities of match-fixing gangs by emphasizing “education and prevention” of players and officials. Thus, the system has created a paradigm – similar to the anti-doping movement – where the athletes are blamed. The official view of corruption prevention is that young, generally impoverished, players need to be ethically educated by purported honest executives paid by large sports organizations like the International Olympic Committee or FIFA. This is in contrast to the idea that athletes should directly benefit from the money from gambling company sponsorships in the form of increased benefits or salaries.

In Stanovic’s view this approach is an open door for more corruption and that match-fixing is here to stay.

“I am even more certain that it is going to happen at this kind of level. There are quite enough reasons for those players to manipulate because they are doing something but they are not profiting.”