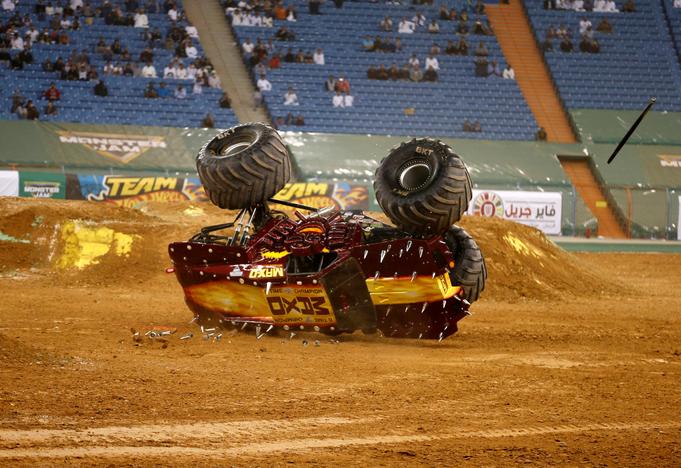 When senior Saudi cleric Abdulaziz al-Tarifi told his almost one million Twitter followers that musical instruments were ungodly, it helped spark a hashtag among like-minded Saudis that “the people reject music academies”.

The hashtag, echoing the language of Arab Spring revolts elsewhere, captured the hostility to reforms that introduced entertainment events from rock concerts and comedy shows to kick-boxing into the conservative kingdom.

But Nora Shanar, a writer at Saudi newspaper Elaph, spoke for swathes of people when she shot back to defend a shake-up of the Saudi cultural scene: “Don’t speak in the name of the people.”

“Speak in the name of those who don’t love life and forbid music when God himself did not.”

Such exchanges highlight strains between the ruling family’s alliance with conservative clerics which have been exposed as a reformist and powerful prince works to diversify the economy away from oil and permit new freedoms among Saudis steeped in cleric-imposed puritanism.

The entertainment events aimed at creating more jobs were allowed by Deputy Crown Prince Mohammed bin Salman, head of the royal court, defence minister and son of King Salman, as a matter of economic survival as well as entertainment for Saudi citizens, dependent for decades on welfare state benefits.

The changes are also intended to capture up to a quarter of the $20 billion currently spent overseas by Saudis, who are accustomed to travelling abroad to see shows and visit amusement parks in nearby tourist hub Dubai or further afield.

But the price for the Al Saud and for a powerful business class that supports modernisation and a greater role for women has been tensions with traditionalist clerics upon whose support the ruling family relies for its legitimacy.

The Wahhabi religious establishment has had a symbiotic relationship with the Al Saud dynasty since the mid 18th century, offering its rule Islamic legitimacy in return for influence over important chunks of the state such as education and the judiciary, and a network of mosques and universities.

The clergy suspect bold initiatives conceived by the prince in leisure and tourism presage sweeping reforms in education, a bastion of conservatism where clerical control is believed by Western nations to have encouraged Islamist radicals – not just in Saudi Arabia but across the Muslim and Arab worlds.

As a result, resistance to reforms like women’s employment and the encouragement of teaching on technical subjects persists in many corners of Saudi Arabia, the birthplace of Islam, propelled by clerics with vast social media followings.

Bernard Haykel, professor of Near Eastern Studies at Princeton, expected the “overwhelmingly powerful” Saudi state could drive its social and economic reforms through despite conservative unease, using the argument they were vital for economic survival.

“The interesting thing about this moment is that you see, in effect, social liberalisation but not for ideological reasons but for purely economic, fiscal and budgetary reasons,” he said.

Haykel suggested there was a risk that any future popular economic discontent might be manipulated or mobilised by disaffected religious conservatives or opponents of MbS, as the 31-year-old deputy crown prince, is known.

But so far MbS, Middle East analysts say, has shown an ability to change course to head off any build up of steam, citing a recent decision to restore financial allowances to civil servants cut last year under an austerity programme.

“The state is quite agile and dynamic in responding to what it feels are potentially sources of real dissent,” Haykel added.

Historically, tensions have arisen between the Saudi royal family and the ultra-austere religious establishment.

Throughout the modern history of the kingdom, clerics have objected to what they regard as corrupting, for example women’s education and permission for them to drive. Clerics lost the battle to stop the introduction of television in the 1960s, and for years were hostile to satellite TV.

But MbS can depend on his father King Salman, who is highly respected among conservative and senior clerics, to help him to implement his “Vision 2030” designed to prepare the kingdom’s economy and its society for a future less dependent on oil.

On the ground in Saudi Arabia, reform and social change are tangible. Whereas Saudis once dined in silence, with music deemed offensive to conservative ears, restaurants around Riyadh now play jazz and lounge music.

And radical economic reforms, announced last year to protect Saudi Arabia from low oil prices, have been successful so far, with spending cuts that have sharply shrunk a $98 billion budget deficit, according to Mohammed bin Salman.

MbS’s most significant social change to date has been to strip the feared mutawa religious police of the power to arrest or question people, a major development in the state’s relations with clerics, and which met no mobilised opposition.

Insiders recount how MbS reminisces about what he sees as a more liberal, tolerant and open minded Saudi Arabia in the 1970s, which shut down in 1979 after the Iranian revolution and the seizure of the great mosque at Mecca by Islamist millenarian radicals. His aim, they say, is to try to restore that era.

According to some polls most Saudis, a majority of whom are under 30 and widely connected to the world via social media, are hungry to catch up with a world that has been passing them by.

But religious clerics are pushing back.

Conservative unease could be seen in tweets that followed a recent interview with Ahmed al-Khatib, the man spearheading the kingdom´s entertainment reforms, in which he said Riyadh will one day open cinemas and build an opera house.

Khatib, chairman of the General Entertainment Authority, said conservatives who denounced the opening of cinemas and entertainment events as sinful could simply opt to stay at home if they did not care for them.

Khatib later added that the authority would also arrange suitable entertainment for conservatives, too.

The kingdom had some cinemas in the 1970s but the clerics persuaded authorities to close them, reflecting rising Islamist influence throughout the Arab region at the time. Cinemas are still banned. While concerts started to be held this year, concerts and music in general are frowned on by clerics.

The comments by Khatib received a mostly positive response. On Twitter, a hashtag thanking his institution began trending along with images of people dancing and eating popcorn.

Khatib said GEA activities have created 20,000 jobs so far after only seven months.

However, many conservatives saw Khatib’s comments as divisive and provocative. Mohammed al-Suhaim, a scholar of Islam at King Saud University in Riyadh, tweeted a hashtag calling for Khatib to be put on trial.

“Advice from a friend to Mohammad bin Salman: Restore (power) to the Committee for the Promotion of Virtue and the Prevention of Vice (mutawa religious police) and stop the Entertainment Authority,” one unidentified tweet read.

But the most prominent members of the religious authority, including many who previously criticised the entertainment push, were silent on the cinema issue.

The Grand Mufti said in January that cinemas could open the door to “atheistic or rotten” foreign films and encourage the mixing of the sexes, but did not comment on Khatib’s remarks.

Diplomats say King Salman must allay the concerns of the clerical establishment, for no one else in the Al Saud has his connections or credibility with the religious establishment.

The king will be the last surviving son of King Abdelaziz ibn Saud, who founded modern Saudi Arabia in 1932 after three decades of Wahhabi-fuelled conquest across the Arabian peninsula, to rule the kingdom, and he has been part of the inner circle of the Al Saud ruling family for decades.

In a meeting with the U.S. ambassador in March 2007, described in a cable released by WikiLeaks, Salman said the social and cultural reforms instigated by then King Abdullah had to move slowly for fear of a conservative backlash.

But years later, by backing his son MbS, the king appears to have accepted that change in Saudi Arabia needs to accelerate.