A new Pew Research Center survey, conducted March 21-27, finds that just 7% of U.S. adults have an overall favorable opinion of Russia. Only 6% express confidence in its leader, President Vladimir Putin. In contrast, 72% have confidence in Ukrainian President Volodymyr Zelenskyy.Russia’s invasion of Ukraine has led to a dramatic shift in American public opinion: 70% of Americans now consider Russia an enemy of the United States, up from 41% in January. And on this topic, Democrats and Republicans largely agree, with 72% of Democrats and 69% of Republicans describing Russia as an enemy. 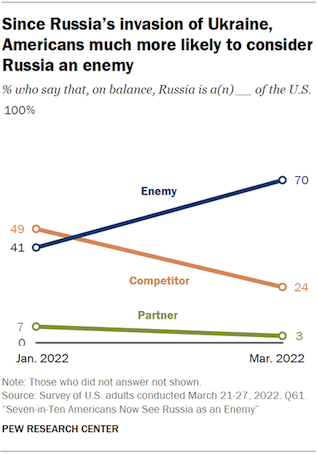 The ongoing war has brought renewed attention to NATO. Ukraine is not a NATO member, but it borders several member states, and NATO leaders have worked together in recent weeks to coordinate their responses to the crisis. Attitudes toward the alliance have grown more positive since Russia’s invasion: 67% express a favorable opinion of the organization, up from 61% in 2021. Meanwhile, 69% say the U.S. benefits a great deal or a fair amount from being a NATO member.

Still, partisan differences over NATO have shrunk somewhat over the past year. The share of Democrats and Democratic leaners with a favorable overall opinion of NATO has held steady at nearly eight-in-ten, but among Republicans and GOP leaners, positive views have increased from 44% in spring 2021 to 55% today. 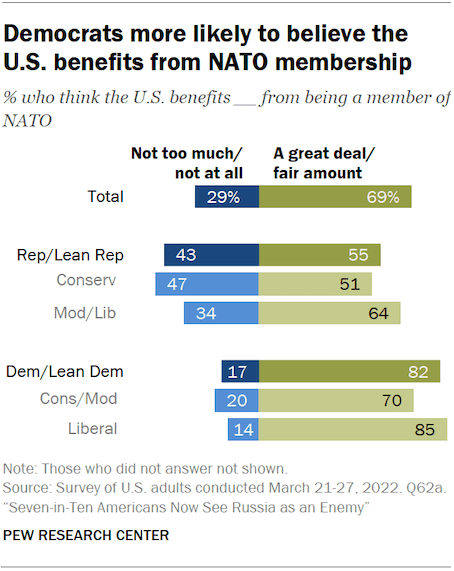 While both Democrats and Republicans (including those who lean to each party) hold largely positive views about NATO and U.S. membership in the organization, Democrats are consistently more positive, especially liberal Democrats. For instance, 85% of liberal Democrats think the U.S. benefits a great deal or a fair amount from NATO membership; among conservative Republicans, only 51% hold this view.