With the problem of power outages seemingly unsolvable, Palestinians have begun adopting solar technology, with more and more public institutions and private residents are getting cheaper, abundant energy.

Faced with power blackouts lasting anything from eight to 12 hours a day, residents and businesses in Gaza are increasingly turning to the sun to supply their enery needs.

Not only are solar panels more reliable and cheaper in the long run, but in some cases, including that of Tamer al-Burai, they have become essential to staying alive.

To me, power is not just about lights or entertainment, it’s a matter of life and death, said Burai, 40, who suffers from a severe sleep disorder that affects his breathing and has to be hooked up to an oxygen ventilator at night.

Burai used to spend around 18,000 shekels ($4,600) a year on fuel to run a generator that helped make sure he could weather the daily blackouts. Now he has invested in solar panels, making the long-run costs much cheaper.

I paid $5,000 to get solar energy for the entire house and that will provide relief for years to come, the father of four told Reuters proudly.

Whereas three or four years ago only a handful of Gaza’s 1.95 million people could afford to think about solar panels, in the past couple of years, as prices have come down, it has become a much more accessible option.

Schools, hospitals, shops, banks and even mosques have started to install panels on their roofs across the Gaza Strip, a self-governing Palestinian enclave which suffered considerable damage in 2014 during a seven-week war between Israel and Palestinian armed groups based in the territory.

Nabeel Marouf, the general manager of the Gaza-based Renewable Power Engineering and Contracting Company, said he had been overwhelmed with orders. Two years ago, he might have had a dozen clients, he said, but now it’s in the thousands.

People have lost hope for a solution to the power crisis, and on top of that there’s the fuel crisis, he said, explaining that the regular power supply, interrupted for years, was a mess and fuel for generators was costly and problematic.

Looking across the rooftops of downtown Gaza City, it is clear solar is catching on, with glinting panels on almost every building. New technology even allows people to hang panels over the edge of their balconies.

Most of the equipment, including batteries and controllers, is imported from China, where they are made by US, Canadian or German companies, said Marouf. They are imported via Israel, which allows them into Gaza via one of its crossings. 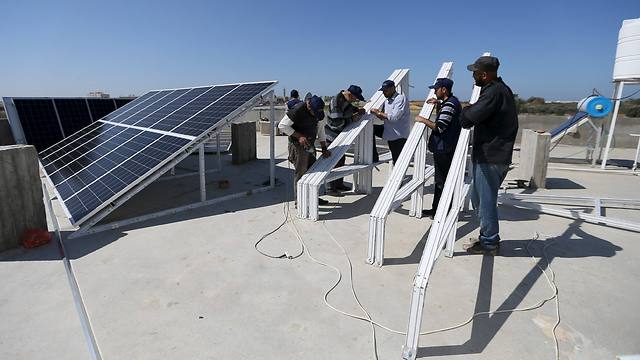 Gaza has three usual sources of power around 60 Megawatts generated by the enclave’s only power plant, 30MW imported from Egypt and 120MW that is supplied from Israel.

Solar power – abundant the year-round in Gaza, perched as it is on the edge of the southeastern Mediterranean between Israel and Egypt – may provide the territory with a degree of energy independence.

In Khan Younis, a town in the southern Gaza Strip, Mohammad Abu Jayyab watched workers as they installed panels on his home.

It has become clear that there are no solutions (to the energy crisis) in the near future, said Abu Jayyab, a local economist. The situation became tragic, so we resorted to an alternative – solar power.