Egypt appeared unable to stop them, so Israel, alarmed at the threat just over the border, took action.

For more than two years, unmarked Israeli drones, helicopters and jets have carried out a covert air campaign, conducting more than 100 airstrikes inside Egypt, frequently more than once a week — and all with the approval of President Abdel Fattah el-Sisi.

The remarkable cooperation marks a new stage in the evolution of their singularly fraught relationship. Once enemies in three wars, then antagonists in an uneasy peace, Egypt and Israel are now secret allies in a covert war against a common foe.

For Cairo, the Israeli intervention has helped the Egyptian military regain its footing in its nearly five-year battle against the militants. For Israel, the strikes have bolstered the security of its borders and the stability of its neighbor.

Their collaboration in the North Sinai is the most dramatic evidence yet of a quiet reconfiguration of the politics of the region. Shared enemies like ISIS, Iran and political Islam have quietly brought the leaders of several Arab states into growing alignment with Israel — even as their officials and news media continue to vilify the Jewish state in public.

American officials say Israel’s air campaign has played a decisive role in enabling the Egyptian armed forces to gain an upper hand against the militants. But the Israeli role is having some unexpected consequences for the region, including on Middle East peace negotiations, in part by convincing senior Israeli officials that Egypt is now dependent on them even to control its own territory.

Seven current or former British and American officials involved in Middle East policy described the Israeli attacks inside Egypt, all speaking on the condition of anonymity to discuss classified information.

Spokesmen for the Israeli and Egyptian militaries declined to comment, and so did a spokesman for the Egyptian foreign ministry.

Both neighbors have sought to conceal Israel’s role in the airstrikes for fear of a backlash inside Egypt, where government officials and the state-controlled media continue to discuss Israel as a nemesis and pledge fidelity to the Palestinian cause.

The Israeli drones are unmarked, and the Israeli jets and helicopters cover up their markings. Some fly circuitous routes to create the impression that they are based in the Egyptian mainland, according to American officials briefed on their operations.

In Israel, military censors restrict public reports of the airstrikes. It is unclear if any Israeli troops or special forces have set foot inside Egyptian borders, which would increase the risk of exposure.

Mr. Sisi has taken even more care, American officials say, to hide the origin of the strikes from all but a limited circle of military and intelligence officers. The Egyptian government has declared the North Sinai a closed military zone, barring journalists from gathering information there. 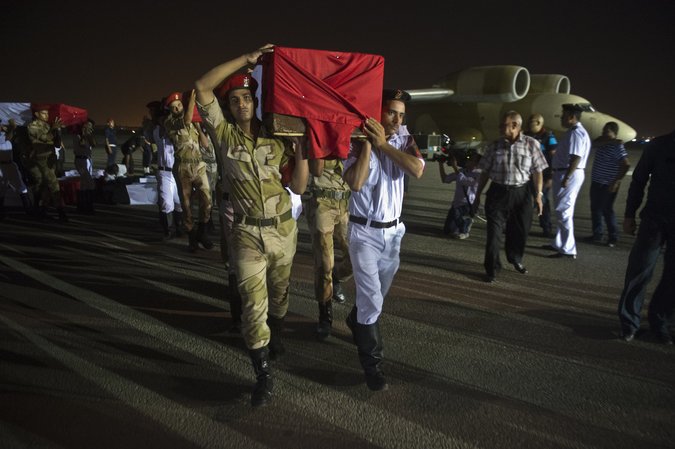 Behind the scenes, Egypt’s top generals have grown steadily closer to their Israeli counterparts since the signing of the Camp David accords 40 years ago, in 1978. Egyptian security forces have helped Israel enforce restrictions on the flow of goods in and out of the Gaza Strip, the Palestinian territory bordering Egypt controlled by the militant group Hamas. And Egyptian and Israeli intelligence agencies have long shared information about militants on both sides of the border.

Israeli officials were concerned in 2012 when Egypt, after its Arab Spring revolt, elected a leader of the Muslim Brotherhood to the presidency. The new president, Mohamed Morsi, pledged to respect the Camp David agreements. But the Israelis worried about the Muslim Brotherhood’s ideological kinship with Hamas and its historic hostility to the Jewish state itself.

A year later, Mr. Sisi, then the defense minister, ousted Mr. Morsi in a military takeover. Israel welcomed the change in government, and urged Washington to accept it. That solidified the partnership between the generals on both sides of the border.

The North Sinai, a loosely governed region of mountainous desert between the Suez Canal and the Israeli border, became a refuge for Islamist militantsin the decade before Mr. Sisi took power. The main jihadist organization, Ansar Beit al Maqdis — the Partisans of Jerusalem — had concentrated on attacking Israel, but after Mr. Sisi’s takeover it began leading a wave of deadly assaults against Egyptian security forces.

A few weeks after Mr. Sisi took power, in August 2013, two mysterious explosions killed five suspected militants in a district of the North Sinai not far from the Israeli border. The Associated Press reported that unnamed Egyptian officials had said Israeli drones fired missiles that killed the militants, possibly because of Egyptian warnings of a planned cross-border attack on an Israeli airport. (Israel had closed the airport the previous day.)

Mr. Sisi’s spokesman, Col. Ahmed Ali, denied it. “There is no truth in form or in substance to the existence of any Israeli attacks inside Egyptian territory,” he said in a statement at the time, promising an investigation. “The claims of coordination between the Egyptian and Israeli sides in this matter are totally lacking in truth and go against sense and logic.”

Israel declined to comment, and the episode was all but forgotten.

Two years later, however, Mr. Sisi was still struggling to defeat the militants, who by then had killed at least several hundred Egyptians soldiers and policemen.

In November, 2014, Ansar Beit al Maqdis formally declared itself the Sinai Province branch of the Islamic State. On July 1, 2015, the militants briefly captured control of a North Sinai town, Sheikh Zuwaid, and retreated only after Egyptian jets and helicopters struck the town, state news agencies said. Then, at the end of October, the militants brought down the Russian charter jet, killing all 224 people on board.

It was around the time of those ominous milestones, in late 2015, that Israel began its wave of airstrikes, the American officials said, which they credit with killing a long roster of militant leaders.

Though equally brutal successors often stepped in to replace them, the militants appeared to adopt less ambitious goals. They no longer dared trying to close roads, set up checkpoints or claim territory. They moved into hitting softer targets like Christians in Sinai, churches in the Nile Valley or other Muslims they view as heretics. In November 2017, the militants killed 311 worshipers at a Sufi mosque in the North Sinai.

By then, American officials say, the Israelis were complaining to Washington that the Egyptians were not holding up their end of the arrangement. Cairo, they said, had failed to follow the airstrikes with coordinated movements of its ground troops.

Although Israeli military censors have prevented the news media there from reporting on the strikes, some news outlets have circumvented the censorship by citing a 2016 Bloomberg News report, in which an unnamed former Israeli official said there had been Israeli drone strikes inside of Egypt.

Zack Gold, a researcher specializing in the North Sinai who has worked in Israel, compared the airstrikes to Israel’s nuclear weapons program — also an open secret.

“The Israeli strikes inside of Egypt are almost at the same level, he said. “Every time anyone says anything about the nuclear program, they have to jokingly add ‘according to the foreign press.’ Israel’s main strategic interest in Egypt is stability, and they believe that open disclosure would threaten that stability.”

Inside the American government, the strikes are widely known enough that diplomats and intelligence officials have discussed them in closed briefings with lawmakers on Capitol Hill. Lawmakers in open committee hearings have alluded approvingly to the surprisingly close Egyptian and Israeli cooperation in the North Sinai.

In a telephone interview, Senator Benjamin L. Cardin of Maryland, the ranking Democrat on the Senate Foreign Relations Committee, declined to discuss specifics of Israel’s military actions in Egypt, but said Israel was not acting “out of goodness to a neighbor.”

“Israel does not want the bad stuff that is happening in the Egyptian Sinai to get into Israel,” he said, adding that the Egyptian effort to hide Israel’s role from its citizens “is not a new phenomenon.”

Some American supporters of Israel complain that, given Egypt’s reliance on the Israeli military, Egyptian officials, diplomats and state-controlled news media should stop publicly denouncing the Jewish state, especially in international forums like the United Nations.

Israel’s prime minister, Benjamin Netanyahu, has also pointedly reminded American diplomats of the Israeli military role in Sinai. In February 2016, for example, Secretary of State John Kerry convened a secret summit in Aqaba, Jordan, with Mr. Sisi, King Abdullah of Jordan and Mr. Netanyahu, according to three American officials involved in the talks or briefed about them.

Mr. Kerry proposed a regional agreement in which Egypt and Jordan would guarantee Israel’s security as part of a deal for a Palestinian state.

Mr. Netanyahu scoffed at the idea.

Israeli’s military was already propping up Egypt’s military, he said, according to the Americans. If Egypt was unable to control the ground within its own borders, Mr. Netanyahu argued, it was hardly in a position to guarantee security for Israel.