Trending
You are at:Home»Categories»Headlines»Russian spies used French Alps as ‘base camp’ for hits on Britain and other countries
By The Telegraph on 5 December 2019 Headlines

The revelations came as Germany expelled two Russian diplomats after prosecutors said there was “sufficient factual evidence” linking Moscow to the killing of a former Chechen rebel commander in central Berlin.

According to Le Monde, British, Swiss, French, and US intelligence have drawn up a list of 15 members of the 29155 unit of Russia’s GRU military spy agency who all passed through France’s Haute-Savoie mountains close to the Swiss and Italian borders.

They stayed between 2015 and late 2018, notably in the towns of Evian, Annemasse and Chamonix – the scene of a ski chase in the 1999 James Bond film, The World Is Not Enough.

They arrived from London, Moscow, Spain and often Geneva.

The Le Monde report added five new names to those already published by online investigative outlets such as Bellingcat and The Insider.

Their identities and movements were uncovered during a joint probe by allied counterespionage services in the wake of the attempted poisoning of defector Sergei Skripal in Salisbury in March 2018, said the paper.

Britain and its allies accuse the Kremlin of seeking to assassinate Mr Skripal, a charge Russia vehemently denies.

Those who stayed in the Haute-Savoie included Alexander Petrov and Ruslan Boshirov – the cover names of the two GRU agents accused of carrying out the attack on Mr Skripal, along with Serguei Fedotov, the suspected mastermind.

According to Le Monde, a fourth agent believed to be linked to the Skripal assassination attempt and who stayed in the Alps, Serguei Pavlov, was located in the UK by MI6 in 2017.

The unit was also active in areas such as Bulgaria, Moldova, Montenegro and Ukraine.

Western intelligence services involved found no material or arms left behind by the agents during their stays in France, Le Monde said, but their presence was confirmed by where they ate, stayed and shopped.

“The most likely hypothesis is to consider it (Haute-Savoie) as a rear base for all the clandestine operations carried out by unit 29155 in Europe,” said a senior French intelligence official, quoted by Le Monde.

The paper said that one theory is that by staying in the Alps, the agents hoped to shake off any suspicion before they carried out their missions, which could explain why they conducted no covert missions on French soil.

On Wednesday, Angela Merkel’s government summoned the Russian ambassador and ordered two of the embassy staff to leave the country within seven days.

The two diplomats concerned are believed to be Russian intelligence officers, according to local media reports.

The German foreign ministry said they had been declared persona non grata in protest at Russia’s failure to cooperate with investigations into the killing of Zelimkhan Khangoshvili, a Georgian national shot dead in a Berlin park in August.

The suspected killer was captured by police attempting to dispose of a gun believed to be the murder weapon in the nearby river Spree.

He was carrying a Russian passport which identified him as Vadim Sokolov, but German prosecutors on Wednesday confirmed that they now believe that is a false identity.

Police findings indicate that it is “highly likely” the arrested man is Vadim Krasikov, a Russian national previously wanted for the murder of a businessman in Moscow in 2013, prosecutors said.

A senior MP in Angela Merkel’s Christian Democrat party (CDU) on Thursday described the case as a “return to the days of the Cold War”.

“Counterintelligence and foreign reconnaissance against Russia must be significantly expanded,” Armin Schuster told Bild newspaper. “Germany must get its act together if a foreign state can order murder on German soil.”.

France denies any “laxism” by its embassy in Moscow for handing him a 90-day emergency visa on July 29 on a fictitious address. He passed through Paris before travelling on to Berlin.

British and French intelligence sources told Le Monde the assassination was “ordered by the pro-Kremlin Chechen regime of Ramzan Kadyrov with logistical help of the Russian state”.

According to Le Monde, French intelligence suspects the Berlin assassination was leaked to the public for “political reasons” linked to President Emmanuel Macron’s apparent rapprochement with Moscow.

Last week, Mr Macron said: “Has the absence of dialogue with Russia made the European continent any safer? … I don’t think so.”

“France’s desire to rebuild strategic ties with Moscow has clearly prompted reactions from states who prefer direct confrontation with Russia,” said one French intelligence source, who denied any French “complacency or naivity” towards Moscow.

French surveillance of foreign Russian espionage was, the source told Le Monde, “no doubt higher than any other service in Europe”.

by The Telegraph time to read: 3 min 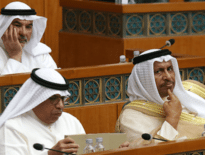 Headlines What a Month Can Mean

Headlines A microcosm of Iran’s domestic problems, port ci…
0
wpDiscuz
We use cookies to ensure that we give you the best experience on our website. If you continue to use this site we will assume that you are happy with it.Ok