The Russian leadership, while refraining from mass mobilization has sought to portray the war in Ukraine as an existential struggle for Russia on the order of the Great Patriotic War against the Nazis. It is therefore entirely appropriate that the term second front crops up in many articles. Sometimes the second front is Russia’s relations with Turkey, at other times it is Russia’s economic pressure on Europe. The most popular and seemingly credible version of the second front is a Chinese assault on Taiwan that will divert the United States from assisting Ukraine. House Speaker Nancy Pelosi’s visit to Taiwan and the furious Chinese reaction revived hope that China’s patience was ending and Russia would soon have its second front.[1]

Not so fast, argues military analyst Pavel Felgengauer in an interview with Rosbalt media’s Alexander Zhelenin. China, he predicts, will make a great deal of noise in the media but will not venture an invasion of Taiwan. It is still inferior to the US in air and maritime capabilities and it can count on Australia and Japanese support and perhaps India and the Philippines could join in. Today’s China is not the China of 1950 that could take major casualties in its stride.  As liberal critics of the Putin regime Felgengauer and Zhelenin have been wary of criticizing the regime and the war directly, given Russia’s current political climate. This interview can possibly be seen as an indirect attack on the current policy.

In your opinion, will the US have the power and tools not only to confront Russia and help Ukraine, but also to wage combat in the Far East, provided China and North Korea carry out their threats and commence military action?

To put it in brief, it has enough.

But if one to remember the Korean War of 1950-53, the Americans had to work hard there…

During the Korean War, the Americans fought primarily against China. North Korea, which attacked South Korea, was defeated rather quickly and hardly participated in the war afterwards. UN troops headed by the US fought there mainly against the Chinese and the Soviet Union. Now neither Russia nor China will fight in Korea.

Russia doesn’t have the power to do so now, and China is unlikely to intervene in Korean affairs today. Beijing would, naturally, like to maintain this North Korean “padding” but not to the point as to intervene in a military conflict, and fight with America. The Chinese are not ready today to fight in Korea, as they were in the 1950s.

But you have to agree that the PRC today is immeasurably more powerful both military and economy-wise today, than it was back then…

True. But America as well has become more powerful.

And yet, let’s imagine that Kim’s threats will be realized and he attacks South Korea, what will happen then?

He blabs, so let him blab. But if it comes down to a real clash, North Korea will be swept away. Perhaps, there will be a couple of nuclear strikes against South Korea (such a scenario cannot be ruled out). However, the absolute defeat of North Korea will be very prompt and effective.

And what if there will be an escalation around Taiwan as well?

Anything is possible. But China is not ready for a major war with the US right now, so I believe it will refrain from provoking the latter

American analysts assume that the PRC could get prepared for such a war by 2030, but not now. Now Beijing is building its navy at an accelerated pace. So far, the Chinese navy has three aircraft carriers, but two of them are essentially pointless (as they have no catapults for [launching]the jets). American maritime and air technological superiority over China, is too serious.

As long as the Chinese aren’t ready to achieve an overwhelming superiority even in the Taiwan Strait, they won’t be able to cross it either. Even an attempt to do so is senseless, as enormous casualties and total defeat await them. Even if they can somehow land on the island, they will be pushed back into the sea.

Additionally, we must bear in mind that today’s PRC is not the China of the early 1950s, when they were suffered appalling losses in Korea, but didn’t pay much attention to it. It’s a different country today, with an ageing population and heavy losses won’t be accepted as easily as they were back then. They aren’t going to wipe out the population of Taiwan with a nuclear strike, because the same Chinese live there, though, in Beijing’s point of view, they are led by bad people, i.e., separatists.

So the PRC will have to deploy conventional arms. In such circumstances, to try to cross the Taiwan Strait means asking for defeat, for which they will be accountable to their own people.

And who aside from the Americans could come to the aid of the Taiwanese, if China did decide on this gamble?

If a conflict around Taiwan breaks out, Japan and Australia will also join the war. Both these countries also have fairly powerful air and naval forces.

Why would the Japanese join the war over Taiwan?

Japan perceives China as its main enemy. Tokyo has already decided to join US forces in case of an attack by Beijing on Taiwan.

It’s possible that the Philippines could also join in and make its bases available. Vietnam and India (which has already overtaken China in population size) may also oppose the PRC. So, for the time being, in my opinion, it will all end up with media noise. 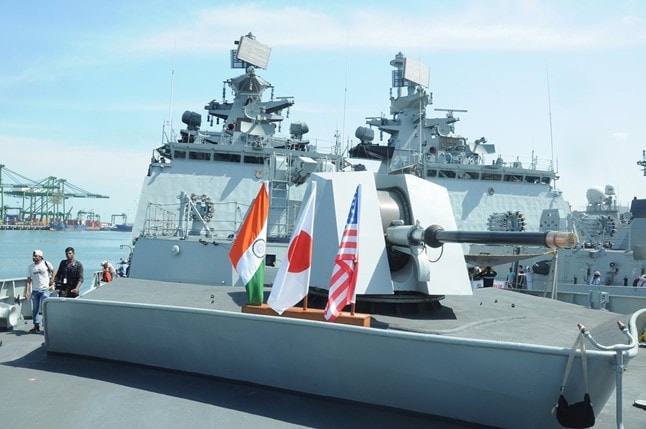