WASHINGTON (AP) — Friend of Russia and foe of sanctions in his corporate life, President-elect Donald Trump’s pick for secretary of state, Exxon Mobil CEO Rex Tillerson, is an unorthodox choice for a Republican White House. He may feel perfectly at home in Trump’s iconoclastic administration.

Likely to face pointed questions from both sides of the aisle at his Senate confirmation hearing Wednesday, Tillerson represents a break in a longstanding tradition of secretaries of state with extensive military, legislative, political or diplomatic experience. Yet his supporters, including former GOP grandees Condoleezza Rice and Robert Gates, point to the oil man’s lengthy career as a senior executive in a mammoth multinational company as proof he has the management and negotiating skills to succeed as America’s top diplomat.

Democrats and even traditional GOP hawks are expected to zero in on Tillerson’s role in orchestrating business deals with Russia, which led to President Vladimir Putin awarding him the Order of Friendship in 2013. Exxon and its subsidiaries’ activities in Iran and Iraq, and his environmental views are also likely to be covered, as are suspicions that Tillerson’s focus will be driven by corporate interests at the expense of the nation’s.

The severity of any challenge to Tillerson’s nomination is unclear. Already, some leading Democrats who met privately with him have voiced relief at his views on Russia, climate change and trade, even if they appear not to mesh with those of the president-elect.

Russia is sure to be foremost on everyone’s mind. With allegations of Russian interference in the presidential election roiling the nation, several lawmakers have spoken about scrutinizing his and Exxon’s two-decade relationship with Putin and others in Moscow. 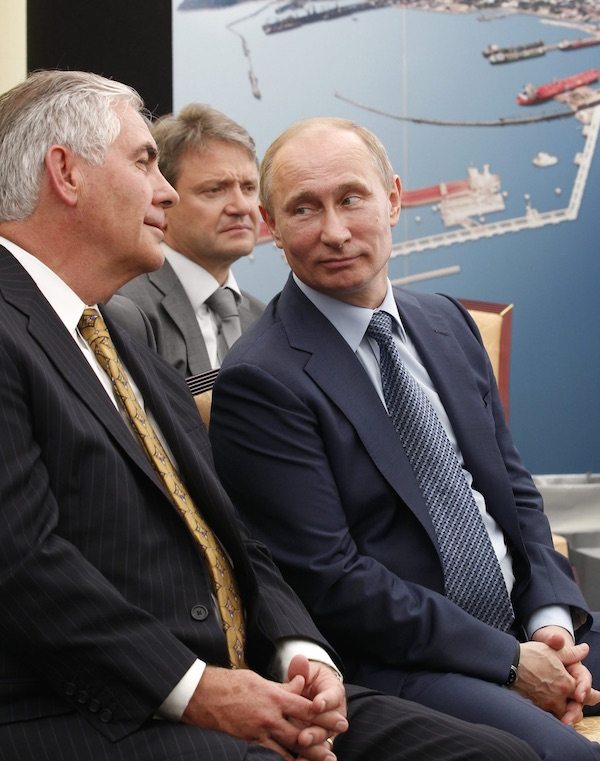 In prepared opening comments for his testimony before the Senate Foreign Relations Committee, Tillerson sought to allay fears about his ties to Russia, saying the former Cold War adversary “poses a danger” that must be taken seriously.

“We must also be clear-eyed about our relationship with Russia,” he will say, according to a statement from the Trump transition. “Russia today poses a danger, but it is not unpredictable in advancing its own interests. It has invaded Ukraine, including the taking of Crimea, and supported Syrian forces that brutally violate the laws of war. Our NATO allies are right to be alarmed at a resurgent Russia.”

At the same time, Tillerson plans to say that an absence of American leadership opened the door to Russia’s increasing assertiveness, according to the prepared remarks. He will also call for an “open and frank dialogue” with Moscow and urge that Russia be held accountable for transgressions.

“Where cooperation with Russia based on common interests is possible, such as reducing the global threat of terrorism, we ought to explore these options,” he will say. “Where important differences remain, we should be steadfast in defending the interests of America and her allies. Russia must know that we will be accountable to our commitments and those of our allies, and that Russia must be held to account for its actions.”

Yet, Tillerson opposed sanctions championed by both Democrats and Republicans on Russia imposed after its annexation of Ukraine’s Crimean Peninsula in 2014. The sanctions banned the transfer to Russia of advanced offshore and shale technology, and Exxon was ordered to stop drilling in the Kara Sea, leaving the site’s potential riches untapped. Tillerson’s main Russian business partner, Rosneft boss and close Putin confidant Igor Sechin, was added to a U.S. sanctions blacklist. Exxon ended up losing hundreds of millions of dollars.

“We do not support sanctions, generally, because we don’t find them to be effective unless they are very well implemented comprehensibly and that’s a very hard thing to do,” Tillerson said at Exxon’s annual meeting in 2014.

That position is far from conventional wisdom in Washington, especially among members of Congress, but gained traction in some circles after the Obama administration conceded that more than a half-century of penalties on Cuba had failed to change Havana’s policies.

Moscow, for its part, hasn’t been swayed by the sanctions, refusing to yield Crimea or to drop its support for a low-level insurgency in eastern Ukraine. But the penalties have caused economic damage to Russia, largely because of the participation of European countries with which it has significant trade relationships.

Tillerson’s responses on sanction matters will be closely scrutinized, particularly as they relate to Russia.

The nomination could hit a snag if Tillerson doesn’t acknowledge that Russia interfered in the presidential election, Sen. Lindsey Graham said Tuesday.

“Hacking the one party is an attack against all parties,” the South Carolina Republican told reporters. He said: “Bottom line is, if you don’t want to do anything about what Russia did, if you don’t believe they’re a good candidate for additional sanctions, I think a lot of people are going to look at you as not having the judgment for the job.”

“There’s going to be a great deal of interest as to whether Mr. Tillerson understands that he is no longer going to be CEO of Exxon Mobil but that he’s going to be secretary of state,” Cardin said.

Progressive groups have their own agenda. They’re seeking to rally opposition over Exxon’s environmental record, deals with nations having poor human rights records and possible conflicts of interest. Exxon valued Tillerson’s compensation in 2015 at $27.3 million, most of it in stock, and he is set to receive a $180 million retirement package from Exxon.

Tillerson, 64, has acknowledged the Earth’s climate is changing, average temperature is rising and greenhouse gas emissions increasing. But he has said the subject remains a complex area of scientific study and Exxon in the past sought to undercut evidence of climate change even as its own scientists recognized the changes as early as the 1970s.