‘The Long Hangover: Putin’s New Russia and the Ghosts of the Past’ by Shaun Walker (Oxford University Press, 278 pages, £20) 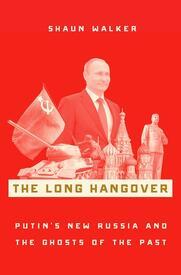 The performance was seen as the latest chapter of a long-running campaign to force the world to recognize Russia’s status as a great power. That is likely how Shaun Walker would have viewed it. After over 10 years as the Guardian’s Moscow correspondent, Walker has produced a fitting valedictory in “The Long Hangover.” At the core of the book is the observation that Putin taps into the bruised sense of national pride after the humiliating collapse of the Soviet Union and the chaotic 1990s, “appealing to a visceral and intangible sense of the past” and vowing to return the country to the rank of “first-tier nations.”

The Russian president once famously described the Soviet collapse as the “greatest geopolitical tragedy of the 20th century.” Walker writes that his political career has been shaped by a determination to “restore what he believed to be Russia’s rightful place on the global stage.” But “The Long Hangover” thankfully does not fixate on the character of Putin. Instead, it focuses on the social conditions that he taps into (and manipulates). The book is girded by Walker’s vivid reporting from every corner of the country – far more valuable than armchair analyzing. It also refrains from offering any easy or sweeping answers.

“It is hardly surprising that the death of a whole system would irrevocably shape the future for years, if not generations, to come,” writes Walker. “But I feel that the particular way in which the Soviet Union disintegrated, and the vacuum of ideas and purpose it left in its wake, is undervalued when it comes to our understanding of Russia and the whole post-Soviet period.” He frames the Soviet collapse less as an ideological trauma and more as an existential one: “Russians felt they had lost not an empire or an ideology, but the very essence of their identity. If they were no longer Soviet citizens, then who were they?” Walker makes no excuses for the bitter, paranoid, often hateful way this nostalgia is expressed. He simply tries to understand its complex and often contradictory causes. “I had sensed constantly during my travels in the post-Soviet world [that]affection for the Soviet heritage was mainly about fighting a dissatisfaction with the present, not about a real longing for the past … It’s more psychotherapy than ideology.”

Central to this new nostalgia is a mythologizing of the World War II victory over the Nazis. A simplistic version of the Great Victory has in recent years been operationalized by the Russian state, finding a receptive audience in ordinary Russian citizens. An annual climax comes in a national parade marking the victory in Moscow. The victory has, Walker suggests, become a new religion: “It had a narrative of martyrdom and glory, and its own symbols and iconography. It demanded a religious level of faith in the truth of its canons, and it had its own saints, sacred texts, and sermons.” Instead of transcending the trauma of the Soviet collapse, he writes, “[the Kremlin has]exploited it, using fear of political unrest to quash opposition, equating ‘patriotism’ with support for Putin, and using a simplified narrative of the Second World War to imply Russia must unite once again against a foreign threat.”

Walker’s reporting takes him to the grim sites of old Soviet gulags in the far east of the country, to Crimea amid its annexation by Russia, and to east Ukraine in the chaos of the pro-Russia separatist war. The book is full of the voices of angry men quoted at length, as well as gem-like details such as when Walker finds a copy of the Ukrainian Constitution being used as toilet paper in a Russian officer’s compound outside Donetsk. Elsewhere in the Donbass, a pro-Russia militant touches at the core of Walker’s thesis. “We need to rebuild the country,” he says. “The Soviet Union, the Russian Empire, it doesn’t matter what you call it. I want a Russian idea for the Russian people; I don’t want the Americans to teach us how to live. I want a strong country, one you can be proud of. I want life to have some meaning again.”

That search for meaning has resonance beyond Russia. In Turkey, the U.S., and across Europe populist demagogues are both stoking and responding to anxieties thrown up by wrenching social and economic changes. These anxieties provide the arable land for fantasies of national glory and the urge to rally behind a strongman. When Walker refers to Russians’ “vague sense of unease and nostalgic longing” that “creates fertile ground for manipulation,” he could be writing about citizens in a growing number of countries.