Trending
(Iran’s military chief visits Aleppo)
Op-ed: A comprehensive American-Russian agreement over Syria’s future, banning the presence of foreign forces, is the only way Israel can prevent Iran from realizing its intentions in the region. We must therefore stop dealing with the unchangeable nuclear agreement and focus on what is more important, as well as attainable.
Giora Eiland
The series of incidents that have taken place in recent weeks between Israel and Syria—including the rockets fired into Israel, the attempt to shoot down an Israeli plane and the attack on an anti-aircraft battery in response—created the feeling of expected escalation to the point of a possible war in the north.

Some people even rushed to accuse Prime Minister Benjamin Netanyahu of allowing the situation to escalate. While the situation does require our utmost attention, it isn’t bringing us closer to war. Moreover, if we do the right thing, we’ll likely be able to prevent an escalation in the situation.The northern threat should be divided in two: A threat from Hezbollah in Lebanon and a broader threat from Syria. At this stage, Hezbollah isn’t interested in a conflict with Israel. The primary reason is a political-economic reason. The organization has lost hundreds of fighters in Syria, and it must financially support their families, as well as care for thousands who were wounded. 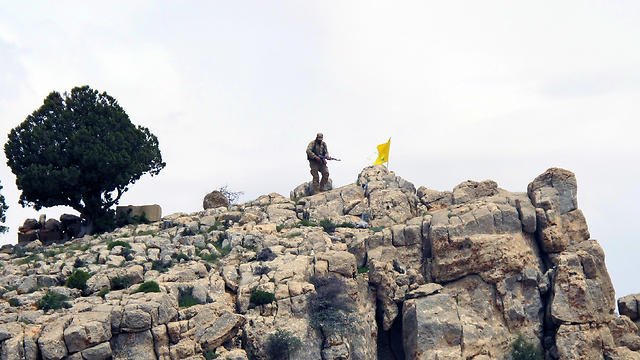 Hezbollah fighter on Syrian-Lebanese border. At this stage, Hezbollah isn’t interested in a conflict with Israel for political-economic reasons (Photo: AP)

Furthermore, the thousands of fighters who joined the organization when it was founded about 35 years ago have already retired. In other words, the organization must pay their pensions. Yes, Hezbollah—for better or worse—is more of an army than a terror organization, and it is subject to a lot of economic pressure. The anger rising from the bottom over the hundreds of young people who have been killed in a war that isn’t theirs is creating further internal Lebanese pressure to avoid a new adventure.

The Hezbollah organization may find itself, therefore, being pressured from two directions: pressure from Iran to launch a war against Israel and internal pressure in Lebanese to avoid a war. The way to guarantee the second type of pressure will be more effective requires Israel to make it clear that “the third Lebanon war” won’t be between Israel and Hezbollah—but between Israel and the state of Lebanon, and that in such a war Lebanon will suffer horrible destruction. There is full justification for such an approach, especially after the Lebanese president announced that “Hezbollah is part of the state’s defensive force against Israel.”

The situation in Syria is different. Iran isn’t hiding its intention of establishing a “second Hezbollah” there—a strong Shiite militia that would be subject to its authority and whose main purpose will be to attack Israel in due time, even if this isn’t what the government in Damascus wants. Senior Israeli officials, including the defense minister, have announced they won’t let it happen. The question is, however, are we capable of preventing it?

The most Israel might be able to do is draw a line 10-15 kilometers from the Golan Heights border and attack any foreign presence there (in other words, not the Syrian army). Such a move is clearly insufficient, however.The only one who can prevent Iran from realizing its intentions is actually Russian President Vladimir Putin. Does he have an interest in turning against his ally in Syria just because it’s important to Israel? I seriously doubt it.The conclusion is clear: Only a comprehensive American-Russian agreement over Syria’s future, which would ban the presence of foreign forces (excluding Russian), could allow Israel to achieve its goals.Israel should therefore focus all its diplomatic efforts on this issue. It should stop dealing with the Iran nuclear agreement, as it is unchangeable, and stop pressing the Americans to deal with it. It must only deal with what is more important, as well as attainable.We are facing two challenges of a diplomatic nature: The simpler thing to do is to explain what the “third Lebanon war” would look like, and the more important thing is to urge the United States to reach a comprehensive “package deal” with Russia which would guarantee there will be no presence of foreign forces in Syria.