I know you pity us, but we can’t take it anymore… your pity. It is true that you come back with a bowl of fresh air, green notes and medicine for your loved ones… and anything else that could stretch our agony.

It is true that you are worried, not to say shocked, to realize how much Lebanon’s face and smell have changed since your last visit. Still, you will fly back to resume your daily lives in a place where nor water, nor electricity, nor medicine are missing.

You won’t have to face fear in your stomach at the thought of getting ill without being treated or having a surgery with no anesthesia; of being the victims of that car accident that your insurance won’t cover, or of having that heartache that would be fatal since hospital material compares to traffic in a field hospital as if in the midst of WWII.

It is true that you’re helping the economy pick up and that you’re postponing the restaurants’ slow death by injecting them with a what keeps them in apnea mode just before their big drowning.

It is true that in Lebanon, one can party for almost nothing, when it comes to those who hold currencies, since the Lebanese Lira gave up the ghost.

We are ruined, our country is robbed and raped, the mafia in power has boned it, bled it, and scares away whoever still has the luxury of buying a one-way ticket to restart from scratch and build a life wherever, anywhere else in a decent enough place. Even if that means trading diplomas for brooms and aprons. After all, there’s no shame in doing any job as long as it preserves whatever remains of our dignity.

Thus, “What are you waiting for to take to the streets?” sounds like harassment. It’s so easy to teach us lessons from afar, even if your interest and empathy are genuine.

What are we waiting for? I have no idea on a personal scale, even though I am haunted by murderous impulses towards our leaders. Besides, it’s not as if we haven’t tried. We still had our moments of glory, united as one, just like on the 14th of March 2005 and the 17th of October 2019. Why was this last revolutionary stream dissolved into sterile individual and political controversies of pseudo-leaders? I wouldn’t be able to come up with an answer except to affirm that this failure was measured up once more to the highest hope that this popular movement has flickered. 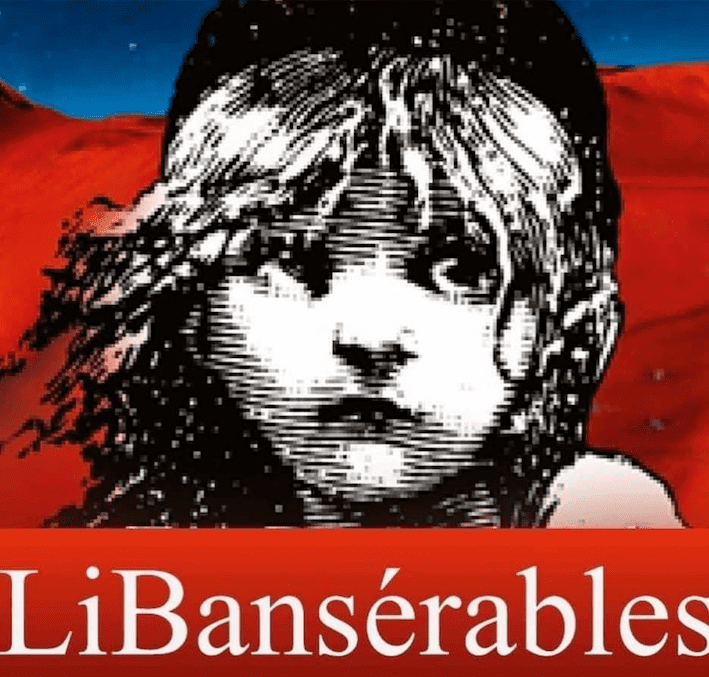 Illustration credit: all rights reserved.
(Waiting to find its author)

Being imprisoned on death row is an insufferable experience. It goes in pairs with helplessly witnessing the fading of one’s country. I keep on wondering how we returned to Lebanon in 1991 with the “pax Syriana” whereas we were comfortably installed in Paris, having our children well integrated on all levels. How weren’t we alerted about the trap contained in these two words “pax Syriana”? Two words that cancel each other out. How could one believe in peace when it was the invaders (still omnipresent) who imposed it? We were back then under a barely veiled occupation, as for us, we were blindfolded.

We had chosen to return to the country of services Lebanon, simply for our personal comfort. We had help at home and life conditions were so much better since we could delegate almost everything. We were also eager for space, such as our triplex home that outweighed the so-called-tiny Parisians apartments.

Honestly speaking, happiness brackets did exist in Lebanon, but they were built on illusions. The country itself is an delusion. A kind of Lego-style construction were bits and pieces of hallucinations built up on quicksand. This country doesn’t stand on anything at all. Its structure is shaky. How could we never have sensed that? How could we have been fooled to that extend? I ask myself the same question everyday. The “Switzerland of the Middle East” is the utmost deception of the century!

Lebanon is a mess where smugglers and go-betweens hold a permanent pass. With spongy borderlines. At the lure of gain. Profit out of any kind of situation is watchword. There are definitely genuine souls doing their best to help a population afflicted by severe impoverishment. Still, those souls are exceptions that confirm the sad truth: a big majority of Lebanese people is as corrupted as its zaïms to whom it still pledges allegiance. This is outraging.

And so we beg you, instead of pushing us to dream of a miracle that is not about to happen, let us die in silence. Don’t summon us with “know-how” lessons from a distance (I’m addressing these words in particular to those who haven’t visited Lebanon this summer), if you think you found the miraculous solution, let’s switch places in this open junkyard that Lebanon is made of; I bet that 72 hours later, you’d exchange your tickets for an earlier departure and you’d never set again in this country even though your parents would still live (on) here.

One should know the pangs of lacking in order to realize how deprived we are; it’s a lack that would never be fulfilled because it is not about hanging on for a war time; this war has certainly traumatized us. Still, we were never out of money, raw material and medicine. People got their salaries and their savings were safe in the banks. Now we’re witnessing a much more pernicious war: the one of Lebanon’s identity annihilation! Not to mention that there is no penny left in the banks and that a gang of mafia plays our fate on Russian or Iranian roulette and other supreme democracy models.

This hallway, that one of death, we wish to cross it alone, while experiencing the chilling pleasure of smoking the last cigarette of a convict. The only help you could offer, dear expats, is to massively vote during the next parliamentary elections, if they even were to take place and if ballot boxes are not racketed to the despots’ advantages, just like this poor country is.

We must admit -and hereby, I speak for myself as well- that we ended up understanding we are screwed, after spending a lifetime building our fantasies on a passed period our parents had so cited to us, the one of a hybrid city brushed with incomparable glamour, the one we have never got to know except through their eyes. We have loved a Lebanon of the past that passed us by and we have hoped in a future that would finally showcase it as this “before” so praised by our parents. We have definitely lost this bet.

In a very short time, Lebanon will forever fall into darkness, deaths of hunger or lack of medicine and care will reach hundreds of thousands. We will definitely be deprived of internet. Maybe it’s only then that a popular tsunami would happen as a steamroller would crush one by one all those tyrants who are taking us hostage. Maybe. And maybe not.

Dear expats, thank you for your empathy. Still, between you and us, let’s leave it at that. You came to lend us a hand, that’s true, and we are grateful, but we’re all done… we’re all (so) done…

*Translated from French by Marie-Christine Tayah