The war in Lebanon in 2006 between Israel and Hezbollah left thousands of American citizens stranded. As Hezbollah rockets landed in Israel and Israeli jets bombed Lebanese targets, the United States government overcame logistical challenges, a bombed out airport, dangerous roads and bureaucratic failures to evacuate 15,000 citizens of the estimated 25,000 there at the time.

More than a decade later, Hezbollah and Israel remain on the brink of war. Meanwhile the U.S. seems unprepared, leaving thousands of citizens exposed and at risk in the event of conflict. Now is the time for the U.S. government to plan its next evacuation—and to learn from its mistakes in 2006. 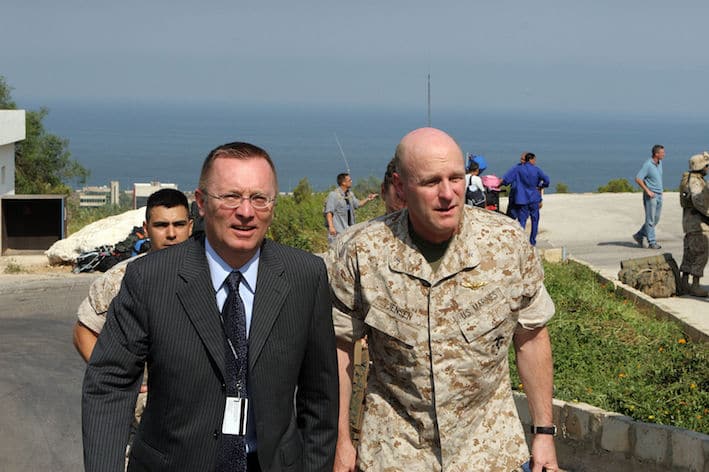 As tensions continue to flare between Israel and Hezbollah, the possibility of war looks increasingly likely. A range of analysts is predicting some sort of direct confrontation. “Another war between Israel and Hezbollah is almost inevitable,” former defense official Mara Karlin wrote in Foreign Affairs, citing the clash of “strategic goals” and arguing that Hezbollah’s “regional popularity has plummeted, and its anti-Israel credentials, which have been tarnished by years of killing Syrians, need burnishing.”

Hezbollah continues to provoke Israeli forces and openly declare its willingness to fight. In various speeches, Hezbollah Secretary General Hassan Nasrallah warned that “Hezbollah soldiers and rockets can reach all the positions across the Zionist entity during any upcoming war.”

Nasrallah continually threatens Israel in yet other ways. He touts the abilities of Hezbollah forces, saying in 2017 that “any Israeli unit that enters Lebanon will be defeated,” and even threatening the Israeli nuclear reactor in Dimona.

Since the 2006 war, Hezbollah’s military strength has grown and Israeli officials estimate it has reached about 150,000 rockets and missiles of various sorts and ranges. Israeli airstrikes in Syria since 2006 have most often targeted Iranian efforts to supply Hezbollah with advanced, precision weapons—hitting weapons convoys and more recently bombing locations where weapons are stored or manufactured. War could break out in any number of ways, including by accident.

The Next Round Will Be Worse

If war breaks out, it will be far more destructive than in 2006. Hezbollah’s arsenal is larger and more advanced, so the damage it can do in Israel—despite Israel’s greatly improved anti-missile defenses—will be far greater. In 2006, combat in Lebanon and about 4,000 rockets claimed the lives of 50 Israeli civilians and 120 Israel Defense Forces soldiers and caused 300,000 Israelis to flee their homes. As former Israeli military intelligence chief General Amos Yadlin put it, “we will pay a higher price than we did during the Lebanon war of 2006, especially on the home front. … there will be a substantial damage.” That damage will lead Israel to strike hard in Lebanon in an effort to stop the attacks as quickly as possible. Major General Nitzan Alon, IDF operations chief, recently warned that in a future Lebanon campaign, Israel would use “maximum force in the minimum amount of time,” citing his belief that “we have to use the advantages the IDF has over its enemies as forcefully as possible and as quickly as possible.”

In 2006, Israel responded to a Hezbollah ground incursion on July 12 that killed several soldiers and kidnapped two by launching two weeks of air attacks—but launched no ground incursion until early August, when Israeli forces did not invade beyond southern Lebanon—and took pains to limit damage to Lebanese infrastructure. For example, the Beirut airport saw its runways cratered, damage easy to repair by repaving, but Israel left its control tower and terminals intact. The two-week delay in Israeli ground action was critical in allowing for the evacuation of Americans, and it is unlikely to be repeated if there is another war. Last September, the Jerusalem Post reported, the IDF held its largest exercise in almost 20 years. The two-week drill mobilized tens of thousands of soldiers from its air, naval and ground forces in preparation for war with Hezbollah. Additional exercises were held in February 2018.

Members of the Israeli governing coalition have warned consistently that the next conflict with Hezbollah will be much bloodier for the Lebanese side. Defense Minister Avigdor Lieberman vowed, “If people in Tel Aviv are in bomb shelters, then they will also be in shelters in Beirut.” “This time,” General Yadlin said, Israel “will not differentiate between Hezbollah and Lebanon.” Even more starkly, then-IDF chief of staff Benny Gantz said in 2014 that in any future conflict started by Hezbollah, Israel would take “Lebanon and knock it and everything in it 70-80 years back.” And in Washington, Senator Lindsey Graham wrote after a visit to Israel in March 2018 that as Hezbollah continues to stockpile missiles, “Israel will have to attack these rocket sites, which Hezbollah has integrated into civilian infrastructure such as apartment buildings, schools and hospitals.”

While such language can be seen as posturing in an effort to deter Hezbollah, it seems almost certain that in another round the damage in Israel and Lebanon will be far greater than in 2006. And that raises the evacuation question: How many Americans might be in Lebanon, and under even worse conditions than in 2006—is the U.S. prepared to evacuate them?

The Evacuation in 2006 Worked

The 2006 war began on July 12 when Hezbollah attacked across the Israeli border. Israel responded with artillery fire, airstrikes on the Beirut airport and a naval blockade the next day. Airstrikes on Hezbollah positions and ground fighting displaced a million Lebanese and left more than a thousand (including Hezbollah combatants) dead. Hezbollah’s practice of placing missiles and other munitions in heavily populated locations (which continues today) made them Israeli military targets. The war lasted 34 days.

The U.S. initiated its evacuation on July 14, when the Pentagon put Central Command in charge and CENTCOM began moving ships from the Red Sea through the Suez Canal to the Mediterranean. Within a few days, the U.S. government had also begun chartering commercial ships and reaching out to American citizens. The first group of U.S. citizens was evacuated from Beirut to Cyprus by helicopter on July 16 and in one week 10,000 had reached the island. Other Americans were transported by air to the U.S. Air Force base in Incirlik, Turkey. In all, 15,000 Americans were evacuated in three weeks—by August 2—without a single one being killed or injured during the operation. A ceasefire did not come until August 14, after more days of fierce combat.

But the 2006 Evacuation Revealed Problems

So the 2006 evacuation was an overall success. But according to a 2007 assessment from the Government Accountability Office, the internal federal government watchdog, the operation demonstrated a number of difficulties that called for changes that would be even more important in a larger and more complex future conflict.

The report found that evacuation from Lebanon presented the State Department and Pentagon with several significant challenges. First, it was undertaken during an ongoing conflict in which evacuation routes were blocked. Safely navigating sea routes required difficult coordination with Israeli forces while they conducted a war. And because the crisis was unforeseen, the U.S. military did not have naval assets immediately available for a sea evacuation.

If there is another round between Israel and Hezbollah this year, all those problems will be greatly magnified.

First, the magnitude of the Lebanon crisis taxed State’s capacity to respond. Second, State did not communicate effectively with the public, including potential evacuees in Lebanon and their family and friends in the United States. For example, State initially restricted the ability of U.S. Embassy officials in Beirut to convey critical information via the media to Americans seeking to leave Lebanon. Third, State and the Department of Defense’s different institutional cultures and systems impeded their ability to work together; among other things, these differences resulted in miscommunications and possible delays in chartering ships and planes to evacuate American citizens.

As it turns out, the 2006 evacuation was precedent-setting in one way: U.S. Embassy employees in Beirut were overwhelmed with calls from U.S. nationals seeking to leave, realized that they could not carry out the operation on their own, and turned to the Pentagon. The State Department was able to carry out the majority of the 80 or more evacuations it undertook all over the world from 2001-2006 using only commercial flights. Not this time.

From July 14-23, State and DOD were able to evacuate nearly 10,000 U.S. nationals to Cyprus. Yet the sudden spike in demand for hotel rooms for the U.S. entities, coupled with the fact that Cyprus was at the height of its summer tourist season, made accommodations scarce. The situation became so desperate that the U.S. Embassy in Nicosia and the Cypriot government “arrange[d]for the Americans to stay at the Nicosia fairgrounds, in large exhibit halls normally used for trade shows.”

Because of the intensity and scale of the war, the State Department was unable to rely on its existing emergency plans. For instance, the Beirut emergency plan did not account for the possibility that Israel would bomb the airport—which it did right at the outset of the 2006 conflict.

In addition, many U.S. citizens who had never registered with the U.S. Embassy sought evacuation assistance as the war went on. Their numbers and whereabouts were unknown to embassy personnel and had not been included in the prior emergency planning.

To make matters worse, the GAO report found that the State and DOD have “different institutional cultures and systems, which impeded their ability to work together,” including clashing terminology and methodology. For example, “where State officials might request 10 planes, DOD officials would want to know the precise numbers of people and tonnage of equipment to be transported.” This was compounded by some degree of overlapping duties, resulting in inadvertent self-sabotage: “State and DOD were competing for some of the same commercial planes, thereby creating duplicate requests that gave the perception of fewer available planes for contract.”

The State Department has made several adjustments to expedite future evacuations, working to improve embassies’ communications guidelines, submitting best practices reports to other embassies, and presumably revising the Beirut emergency plan. Still, the prospect of a larger and more intense war ahead leaves many open questions.

Ready for the Next Round?

Is the United States ready for the next round in Lebanon? By all accounts, there remain something like 15,000-25,000 Americans, and perhaps more, in Lebanon. If war breaks out, every indication is that it will be a fiercer conflict than in 2006. The U.S. Embassy will not have two weeks or more before ground combat begins—and it was in those first two weeks when most Americans were evacuated last time. The airport and seaport are sure to be closed again. Ground routes for getting Americans to safety will be harder to carve out when there is air and ground combat throughout the country.

Of course temporary cease-fires can be tried, and the ports could be opened for hours at a time—but the logistical burden falling on State and DOD, and the U.S. Embassy in Beirut in particular, will be far greater than last time. It can be assumed that the Pentagon will have to take on the same, or even more, responsibilities than in 2006. Has it prepared to use warships or to lease ferries for the evacuation? Is the embassy fully ready with a communications package to reach all Americans at once, perhaps using the technologies that were new and not widespread in 2006? Has the embassy increased the percentage of Americans who have registered, so that it has a far better grasp of who and where they are? Has the United States discussed all the evacuation issues with the Israeli government and military, agreeing now on plans to cope and methods of working together if war starts?

Perhaps war will be avoided, and perhaps there will be a slow and steady buildup of tension during which time Americans can begin to leave safely. But it’s at least as likely that war will break out suddenly—stranding thousands of Americans who then desperately seek help to get to safety. The time to work through these problems is right now.