Kuwait is ramping up crude oil production as Saudi Arabia and its allies seek to cool global prices in response to pressure from US president Donald Trump, with supplies from the two Gulf countries’ jointly-operated oilfields likely to assume greater importance.

After international benchmark Brent crude surpassed $80 a barrel in May, it is now trading closer to $77. Prices around these levels, Kuwait’s oil minister Bakhit al-Rashidi has said, are closer to a more “stable” range for prices. “It is clear today based on the current level of production that we are approaching a very stable stage . . . whether for the consumers or the producers,” Mr al-Rashidi told reporters in August.

Kuwait pumped almost 2.8m barrels a day in July, according to Opec’s research arm and the International Energy Agency.

The Gulf country’s production is in focus as it is a regional ally of Saudi Arabia, Opec’s largest producer, which has pledged to increase production significantly since a meeting of oil ministers in June, to make up for an expected fall in Iranian exports.

Saudi production hit 10.4m b/d in July according to figures submitted by consultants and analysts to Opec, but some industry experts say it has reached higher levels around 10.6m b/d.

President Trump has demanded that global producers pump more oil to alleviate any supply losses from Iran after a new round of US sanctions on the country’s oil sector comes into effect in November. Mr Trump is seeking to keep crude prices in check ahead of the US midterm elections in November. This is in spite of the fact that it is his anti-Tehran rhetoric and warnings to consumers to cut their imports of Iranian crude that have fuelled much of the price rises this year.

Kuwait and Saudi Arabia’s shared Neutral Zone, where production has been offline for almost four years, could see a “material lift” in the coming months of 500,000 b/d, the IEA said.

This is also where much of Kuwait’s remaining production capacity is located. 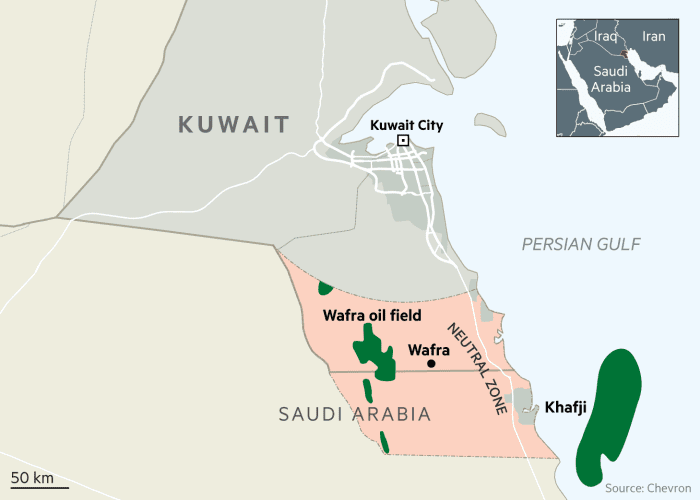 Local press reports in Kuwait point to the formation of a new governmental committee to resolve a dispute between the neighbouring countries, which could see output restart from the offshore Khafji deposit and the onshore Wafra field.

Khafji, which is co-owned by state energy companies Saudi Aramco and Kuwait Petroleum Corporation (KPC), has been shut down since late 2014 after regulators in the kingdom said it failed to comply with new environmental rules.

This coincided with a drop in oil prices and a brutal industry downturn. Japan’s Toyo Engineering, a contractor, said in July that it had extended a general engineering services agreement with operators in the Khafji oilfield for production to restart next year.

Wafra, meanwhile, is operated by the KPC subsidiary and Chevron’s Saudi unit. The field was closed in May 2015 after the US energy major said it had difficulty in securing work and equipment permits from Kuwaiti authorities.

Since the fields’ closure, diplomatic relations between Saudi Arabia and Kuwait have been strained because of Kuwait’s attempts to mediate in a dispute between the kingdom and Qatar, which has been subject to a Saudi-led blockade.

There are questions about producers having enough spare production to replace Iran As prices rebound and producers commit to easing output cuts that have been in place since January 2017, Amrita Sen at Energy Aspects, a research consultancy, says the Neutral Zone would be an easy means to raise production capacity. “Saudi and its allies will need every barrel of oil to compensate for expected falling Iranian production and exports and to appease the US,” she says of the area where crude output is divided equally between the two countries.

The Neutral Zone, which was left undefined when Kuwait’s borders were drawn in 1922, is the only place where foreign oil groups have equity in fields that are otherwise owned and operated by Kuwaiti and Saudi state oil companies.

Kuwait’s oil minister and his Saudi counterpart Khalid al-Falih will meet in November to discuss the issue further with the aim of a December reopening, with energy analysts predicting production is more likely to restart in the first three months of 2019.

While the resumption of operations is not confirmed, Robin Mills, chief executive of consultancy Qamar Energy, says the kingdom, in particular, was under pressure to ensure there was enough extra production capacity on hand in the event of a dramatic drop in Iranian supplies. “There are mounting questions about big producers having enough spare production to replace Iran. I think spare capacity is sufficient but it would be thin. Hence the importance of having the Neutral Zone available,” Mr Mills added.