New York – Here at the Brooklyn Federal Court House, one of the most significant legal trials in sports history is underway.  Two-and-a-half years ago, Swiss Police kicked open the doors of the Baur-au-Lac Hotel in Zurich and began arresting high-ranking FIFA officials.  After long stretches of legal wrangling – during which twenty-four officials pled guilty to a wide-range of crimes from fraud to money laundering to racketeering – today, the case for the officials who did not plead hits the court. 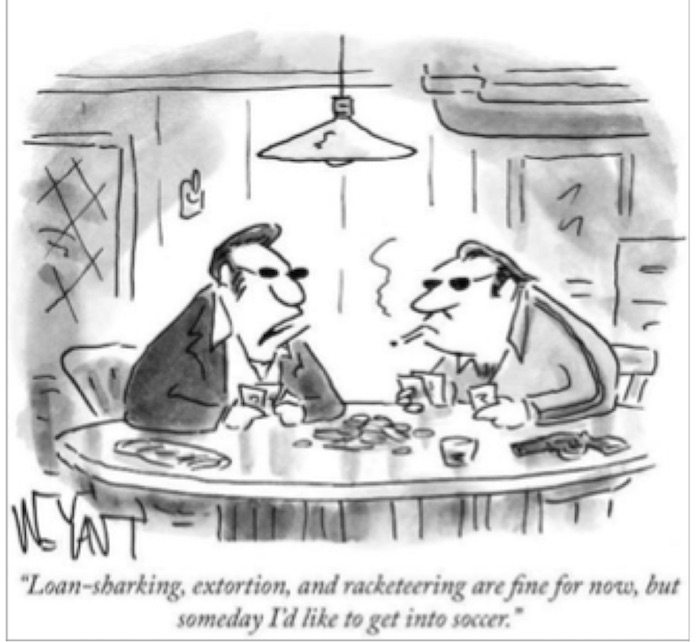 Among four key points about the trial, there is one extraordinary story that has so far been missed by the world press:

Yes, yes, yes… every time there is a mention of FIFA, people talk about the ‘mafia’ or ‘football mobsters’.  However, this trial really is about an alleged mobster.

i)         The U.S. Government claims that one of the accused has issued credible ‘death threats’ against a key witness.

ii)        The accused also said that he has had a ‘prosecution witness killed’ in a previous trial.

iii)       A witness was, allegedly, kidnapped by associates of the accused presumably as a way of making sure they gave the  ‘right evidence’ during the trial.

In September, the District Attorneys pushed hard to make the trial a closed-jury trial.  They even introduced security measures to have all prospective jury members guarded during the trial.   The defence teams fought against these applications.  Now we know the background that prompted the legal battle: alleged death threats, claims of a murder and kidnapping.

These claims all have yet to be proven in court, but slice and dice it anyway you want – the accusations, if proved, are about a mobster in action.  It moves the seriousness of the trial from simply a group of sports officials allegedly defrauding commercial aspects of the world’s game into a serious organized crime matter.  If proven, it asks fundamental questions about who was at the centre of world sport.

2. It could only happen in America.

The judge and most of the jury, police, defence and prosecution lawyers probably could not tell a corner kick from a bicycle kick. In this sports-mad city, soccer rates just about the same level of attention as professional tiddly-winks.

This is why it took the United States of America to push for the prosecution of the top-levels of FIFA and their respective confederations.    The ‘protection’ that senior FIFA officials could give their members was to say to national police forces around the world, ‘Prosecute/investigate our officials and we will stop your national team from participating in the World Cup’.

That is a political threat of immense importance in 210 countries in FIFA.  In the last – the USA – it mostly only brings a bewildered glance and a question like, ‘Say, does that cute guy for Real Madrid play in the World Cup or is that something else?’

3. Its an under-reported story

Compared to the FIFA election of February 2016, there are surprisingly few journalists here.  In Zurich, there were hundreds of reporters camped out in front of the stadium where the election was being held.  They mostly had to rely on the trusty media device of interviewing each other to pass the time.  Here at the courthouse there are only a couple of dozen reporters present for the unpeeling of the real world of FIFA finances.

4. There is no shortage of powerful women

The judge – Pamela K. Chen – is a woman.  The Chief Judge of the Brooklyn Court – Dora L. Irizarry – is a woman.  So was their boss when this case began – U.S. Attorney-General Loretta Lynch.   One of the District Attorneys prosecuting the case – Bridget M. Rohde – is a woman.  Some of the defence lawyers are women.

This is important because football in general, and FIFA specifically, are some of the last bastions of male-only privilege.  Walk through the hallways of almost any football/soccer international organization (outside of Scandinavia) and you feel that you have been time-warped back to 1954.  The powerful men stroll around in suits while dutiful women type on computers, answer phones and fetch coffee.

Now comes the legal reckoning for FIFA and it is good to see that outsiders – women – are in important positions, looking into this closed world.   It is long overdue…