Trending
You are at:Home»Categories»Headlines»Israel-China Relations: Staring Into the Abyss of US-Chinese Decoupling
By James M. Dorsey on 2 June 2020 Headlines

Israel knew the drill even before US Secretary of State Mike Pompeo boarded his flight to Tel Aviv earlier this month four days after the death of his father. It was Mr. Pompeo’s first and only overseas trip since March.

Echoing a US warning two decades ago that Israeli dealings with China jeopardized the country’s relationship with the United States, Mr. Pompeo’s trip solidified Israel’s position at the cusp of the widening US-Chinese divide.

Two decades ago the issue was the potential sale to China of Israeli Phalcon airborne warning and control systems (AWACS). Israel backed out of the deal after the US threatened withdrawal of American support for the Jewish state.

This month the immediate issue was a Chinese bid for construction of the world’s largest desalination plant and on the horizon a larger US-Chinese battle for a dominating presence in Eastern Mediterranean ports.

Within days of his visit, Mr. Pompeo scored a China-related success even if the main focus of his talks with Prime Minister Benyamin Netanyahu was believed to be Iran and Israeli plans to annex portions of the West Bank, occupied by Israel since 1967.

Israel signalled that it had heard the secretary’s message by awarding the contract for the Sorek-2 desalination plant to an Israeli rather than a Chinese company.

The tender, however, is only the tip of the iceberg.

China’s interest in Israel is strategic given the fact that the Jewish state is one of the world’s foremost commercial, food and security technology powerhouses and one of the few foreign countries to command significant grassroots support in the United States.

If there is one thing Israel cannot afford, it is a rupture in its bonds to the United States. That is no truer than at a time in which the United States is the only power supportive of Israeli annexation plans on the West Bank.

The question is whether Israel can develop a formula that convinces the United States that US interests will delineate Israeli dealings with China and reassure China that it can still benefit from Israeli assets within those boundaries.

“Right now, without taking the right steps, we are looking at being put in the situation in which the US is telling us we need to cut or limit our relations with China. The problem is that Israel wants freedom of relations with China but is not showing it really understands US concerns. Sorek-2 was a good result. It shows the Americans we get it.” said Carice Witte, executive director of Sino-Israel Global Network and Academic Leadership (SIGNAL) that seeks to advance Israeli-Chinese relations.

Analysts, including Ms. Witte, believe that there is a silver lining in Israel’s refusal to award the desalination plant to a Chinese company that would allow it to steer a middle course between the United States and China.

“China understands that by giving the Americans this win, China-Israel relations can continue. It gives them breathing room,” Ms. Witte said in an interview.

It will, however, be up to Israel to develop criteria and policies that accommodate the United States and make clear to China what Israel can and cannot do.

“In order for Israel to have what it wants… it’s going to need to show the Americans that it takes Washington’s strategic perceptions into consideration and not only that, that it’s two steps ahead on strategic thinking with respect to China.  The question is how.” Ms. Witte said.

Ports and technology are likely to be focal points.

China is set to next year takeover the management of Haifa port where it has already built its own pier and is constructing a new port in Ashdod.

One way of attempting to address US concerns would be to include technology companies in the purview of a still relatively toothless board created under US pressure in the wake of the Haifa deal to review foreign investment in Israel. It would build in a safeguard against giving China access to dual civilian-military use technology.

That, however, may not be enough to shield Israel against increased US pressure to reduce Chinese involvement in Israeli ports.

“The parallels between the desalination plant and the port are just too close to ignore. We can’t have another infrastructure divide,” Ms. Witte said.

The two Israeli ports will add to what is becoming a Chinese string of pearls in the Eastern Mediterranean.

Major Chinese construction companies are also looking at building a railroad that would connect Beirut and Tripoli in Lebanon to Homs and Aleppo in Syria.  China has further suggested that Tripoli could become a special economic zone within the Belt and Road Initiative (BRI) and serve as an important trans-shipment point between the People’s Republic and Europe.

BRI is a massive infrastructure, telecommunications and energy-driven effort to connect the Eurasian landmass to China.

Potential Chinese involvement in reconstruction of post-war Syria would likely give it access to the ports of Latakia and Tartous.

Taken together, China is looking at dominating the Eastern Mediterranean with six ports in four countries, Israel, Greece, Lebanon, and Syria that would create an alternative to the Suez Canal.

All that is missing are Turkish, Cypriot and Egyptian ports.

The Chinese build- up threatens to complicate US and NATO’s ability to manoeuvre in the region.

The Trump administration has already warned Israel that Chinese involvement in Haifa could jeopardize continued use of the port by the US fifth fleet.

“The writing is on the wall. Israel needs to carve out a degree of wiggle room. That however will only come at a price. There is little doubt that Haifa will move into the firing line,” said a long-time observer of Israeli-Chinese relations.

James M. Dorsey is an award-winning journalist and a senior fellow at Nanyang Technological University’s S. Rajaratnam School of International Studies in Singapore. He is also an adjunct senior research fellow at the National University of Singapore’s Middle East Institute and co-director of the University of Wuerzburg’s Institute of Fan Culture in Germany.

Israel-China Relations: Staring Into the Abyss of US-Chinese Decoupling 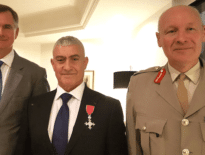 Headlines The Dynamic between Hezbollah and the LAF is case-… 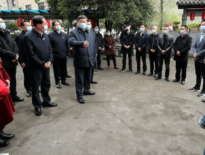 Headlines China’s Coming Upheaval
0
wpDiscuz
0
0
Would love your thoughts, please comment.x
()
x
| Reply
We use cookies to ensure that we give you the best experience on our website. If you continue to use this site we will assume that you are happy with it.Ok