The spectacular acts of slaughter and mayhem perpetrated by the Islamic State (ISIS) and its unabashed, prolific justification for them represents a major challenge for many – for Western and Middle Eastern governments, for the media, and for academia – in how they report and analyze this phenomenon. Many, including Western political leaders, have sought to downplay the “Islamic” part of ISIS. Others have used the extreme depredations of the group to defame and generalize about all Muslims.

The reality is, as is often the case, in the messy, ill-defined, and muddled middle, with ISIS different from but also sharing aspects of its worldview with many other rival and contending Islamic entities. One prominent example of this shared worldview is the ISIS view of the Other, of non-Muslims and of heterodox, free-thinking or liberal Muslims. The hostility ISIS shows for these “polytheists, infidels, and apostates” is often shared by its Islamist rivals and enemies, even if they may not act on this hostility with quite the same bloodlust.

The ISIS zeal in marking Middle East Christians for slaughter and their communities for destruction, whether in Iraq, Syria, Libya, Egypt, or elsewhere, is a case in point. ISIS Egypt’s targeting of Coptic Christians at prayer in their churches – most recently on Palm Sunday, April 9, 2017 – may seem particularly brutal and brazen, and it is.

But the ISIS actions to demonize and eliminate Christians from the region are broadly shared, less bloodily and brazenly but clearly, by a range of political players who are opposed to each other but somewhat similar in this one regard. Turkey, Iran, Saudi Arabia, the Muslim Brotherhood, Al-Qaeda, and related Salafi-jihadis, may all hate and be hated by ISIS but all share some version of a bigoted Islamist supremacist ideology that spews poison against Christians and Jews and against any Muslims too openly identifying themselves as freethinkers or secularists or liberals.

These regional actors are all part of a broader social and political architecture which normalizes bigotry and internalizes hate, and which – because they are not guilt-ridden Westerners – they largely get away with in the eyes of a West desperate for Muslim allies and uncomfortable with defending Christians.[1]

Leave aside ISIS and rival terrorist groups. To be a Christian today in Turkey is to be a target, and this has worsened since the 2016 failed coup.[2] In “liberated” portions of Syria, Christians and Druze have been eliminated by rebels who are both Salafis and anti-ISIS.[3] To be a Christian in Iran is also to be in danger, although the official Iranian discourse is more nuanced, more openly antisemitic than anti-Christian – but prison and torture there are distinct possibilities.[4] Saudi Arabia, which hosts hundreds of thousands of Christian guest-workers, meanwhile produces and exports throughout the Muslim world a flood of Salafi propaganda demonizing non-Muslims, particularly Christians and Jews.

Islamqa.info is a private Saudi Salafi-run website reputed to be the most popular general site on Islam in the world.[5]Among the information available on that site and many other similar ones is Muhammad Ibn Abdul Wahhab’s list of the “Nullifiers of Islam,” actions or beliefs that turn a Muslim into an infidel or apostate.[6]

Among those nullifiers are “whoever does not hold the polytheists to be disbelievers, or has doubts about their disbelief,” and “helping the kuffar (infidels) against the Muslims is a very important issue now days since there is a great mix of the Muslims and the kuffar (infidels). This action constitutes apostasy.”[7] Yes, Saudi Arabia is anti-ISIS and targeted for destruction by ISIS. It also propagates throughout the world the notion that hatred against non-Muslims is a requirement to be a true Muslim and that Muslims living under Western rule have no loyalty to those “infidel” governments. These concepts are also taught by ISIS, and indeed, Issue 7 of their online magazine Rumiyah, published in March 2017, featured an article by convert Um Musa al-Finlandiyah expounding on the “Nullifiers.”

Both Saudi Arabia and ISIS excoriate the Muslim Brotherhood (MB). And this multi-faceted and diffuse organization aggressively seeks to present itself to the West as relatively reasonable and tolerant.[8] Many experts and scholars have warned against the new U.S. administration treating the MB as a terrorist group.

Yet the aftermath of the horrific bombing of Coptic churches clearly shows how the MB, in its own special way, is also an important part of the Middle East hate industry. As befitting an organization often characterized for its discipline and intellectual rigor, the Muslim Brotherhood usually eschews the blatant rhetoric of ISIS and of the Salafis. But the vitriol is not exactly hidden either. 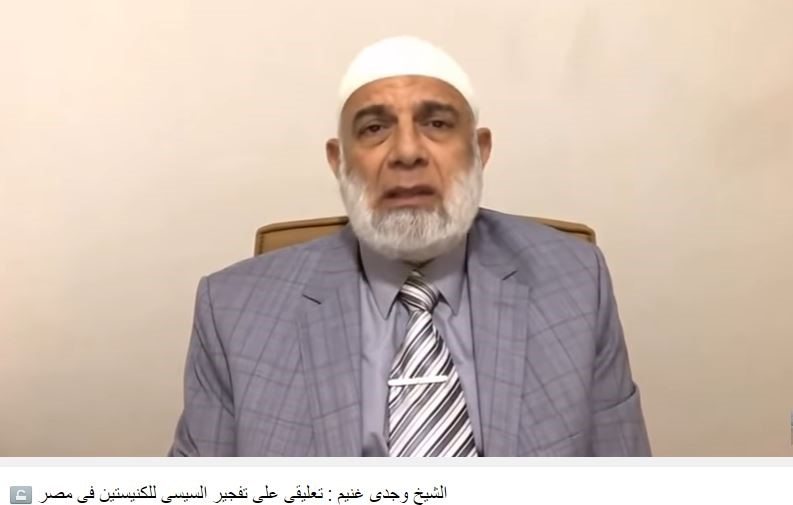 Wagdi Ghoneim, a high-profile exiled Egyptian cleric who supports the MB,[9] was quick to comment within hours of the church bombings.[10] He spends much of a 12-minute video accusing Egyptian President Al-Sisi’s government of carrying the bombings time mocking Egyptian Christians as “Crusaders” and Coptic Orthodox Pope Tawadros II as a “Crusader traitor” for his support for the Egyptian government.

Ghoneim, who has a long history of antisemitism[11] and anti-Christian enmity,[12] repeats the old canard of Copts using monasteries to store weapons, while pushing a narrative that whatever happened to these Copts was deserved. An official statement from the Egyptian Muslim Brotherhood focused on the broader political situation but openly blamed the Egyptian government and the Coptic Church leadership for the church bombings.[13]

All of these states and organizations have their own very specific agendas, which are often at cross purposes with each other. The same Turkey that denounces the “Crusader” West is itself attacked by ISIS for being part of the “Crusader” offensive in Syria. The same Saudi state that propagates Abdul Wahhab’s hardline views is targeted by ISIS for being in the pocket of the Crusaders. Iran promotes the idea that the U.S. is behind ISIS, while pro-Egyptian regime media push the idea that America supported Al-Qaeda.[14] 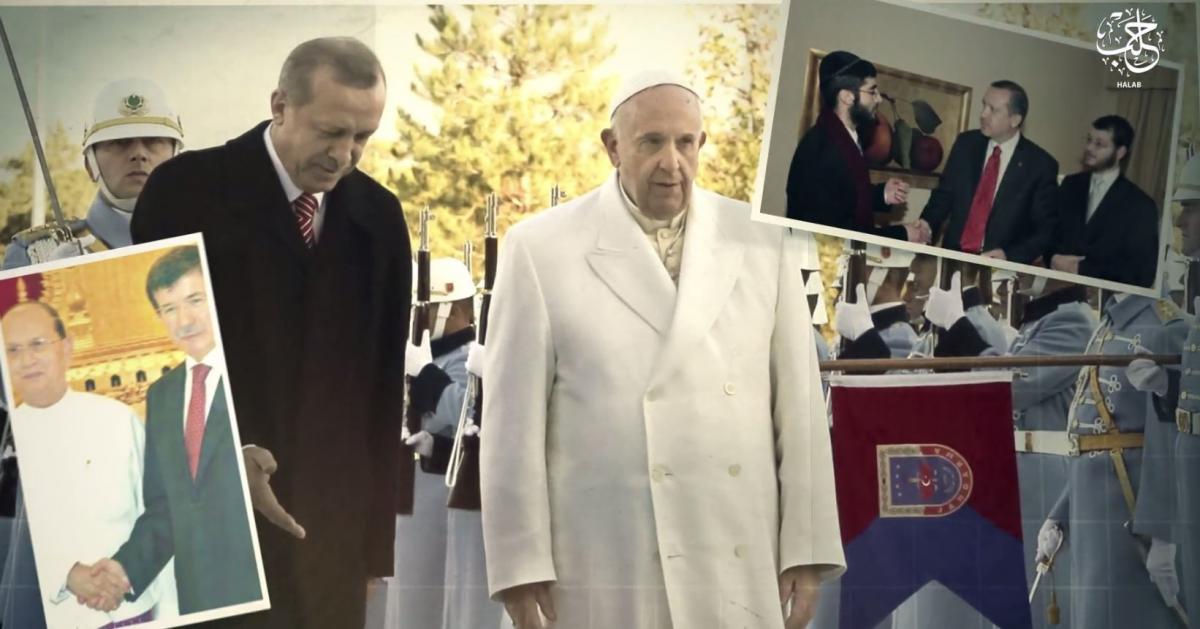 These are all very different political players, but they do overlap when it comes to hostile views of Christians, Jews, and free-thinking Muslims. Of those three groups, Middle East Christians are by far the most exposed. Outside of Israel, most of the region has already been emptied of its Jews. Liberal Muslims can be targeted but they can also “pass” more easily by keeping quiet. Middle East Christians, however, are uniquely exposed, in that as their numbers decline they are weak, yet numerous enough and prominent enough to be targeted.

Lebanon is a special case, and states like Jordan and Morocco still effectively shelter local religious minorities. But even if ISIS ceased to exist tomorrow, there is enough poison accumulated in the regional system – in the media, in the discourse of clerics, in textbooks and religious books, in state action and inaction – to finish the job of religiously cleansing a turbulent region. A toxic echo chamber has been built, for a variety of reasons, over the years, and it has been put into operation. It is not too late for regimes – at least – to radically change this discourse and take urgent preventative action to promote true tolerance and understanding. But this is very unlikely to happen.

This is not to say that policymakers should treat these states and groups in the same way. Far from it. Nor that contempt, hatred and genocide are the same thing. But the scarlet thread of virulent Christianophobia running through the words and actions of the Islamic State finds many echoes outside this organization which is so often dismissed as being an “Un-Islamic” Kharijite outlier.[15]

[1] “The world’s most ancient Christian communities are being destroyed — and no one cares,” Theweek.com, January 23, 2014.

[11] See MEMRI Special Dispatch No. 2987, Yemen-Based Egyptian Cleric Wagdi Ghoneim Interview about Flotilla Clash on Al-Jazeera: ‘Hamas is Fighting America, Europe, and All the Crusader West, Which Supports the Zionist Entity’; ‘By Allah, The Only Way to Liberate Palestine… Is The Path Taken By Hamas… Jihad For The Sake Of Allah‘, May 31, 2010.