Trending
You are at:Home»Categories»Headlines»Is Israel Preparing to Strike Hezbollah?
By Ari Heistein on 31 October 2017 Headlines

Though a targeted strike has up-front costs, failing to act will likely exact an even greater price in the next conflict.

Likely as a response to the effective Israeli interdiction of convoys delivering high-quality arms from Iran to Hezbollah, Tehran and Hezbollah have decided to build the capability to produce advanced weapons in Lebanon rather than ship them there. The arms set for production reportedly include precise surface-to-surface missiles that can travel long distances and inflict significant damage on Israeli forces and infrastructure, thus crossing a red line set by Israel. The latter’s most preferable strategy is to halt Hezbollah’s production of advanced weaponry in Lebanon by means that do not unnecessarily risk provoking a war. The question that Israel now faces is how to proceed in a way that ensures its red line is enforced, while minimizing the risk for uncontrolled escalation.

On the diplomatic front, Israel has already used several methods to relay the message that it will not accept Hezbollah’s production of high-quality weaponry in Lebanon. Behind the scenes, Israeli officials asked European diplomats to pass Jerusalem’s warning about its red line in Lebanon to Iran, which sponsors and manages the arms project. In the public view, Israel and the United States have cooperated in international bodies and public forums to promote multilateral efforts to oppose Hezbollah’s continued acquisition of advanced weaponry. Senior Israeli officials like the minister of defense have also made unequivocal public declarations that such activities are unacceptable. Public statements are important because they relay to Iran the message that these actions will not be tolerated, at the same time as they demonstrate to the international community that any future use of force on Israel’s part will be a last, rather than first, resort. Although threats and declarations did not dissuade Iran from moving forward, and had a low probability for doing so, Israel was right to exhaust its diplomatic options for resolving this issue before turning to military escalation.

Alongside its diplomatic efforts, Israel has demonstrated its determination to prevent Hezbollah from acquiring advanced weapons by surgically striking the group’s weapons convoys in Syria without violating the current “rules of the game.” According to the current understanding, Israeli strikes on Lebanese soil will receive a military response from Hezbollah, while attacks on weapons convoys in Syria will not. The latter is therefore a means to assertively enforce Israel’s red line vis-à-vis Hezbollah’s acquisition of advanced weaponry (at least in Syria), while likely avoiding unpredictable enemy responses or uncontrolled escalation, as these actions are tacitly governed by an understanding between the two sides. However, the same reason that makes these actions less risky also renders them unlikely to change calculations of risk from the enemy’s perspective: they do not present any bold new Israeli strategy or willingness to escalate that Hezbollah and Iran had not already seen prior to embarking on their venture to produce weapons in Lebanon.

Therefore, in early September 2017, Israel allegedly sent a stronger message to Iran by launching an unprecedented strike from Lebanese airspace on an Iranian-run weapons-production facility in Syria that tested the limits of the current “rules.” This single attack delivered several messages. First, Israel is broadening its actions against Hezbollah weapons acquisition to include production facilities. Second, the strike was reportedly launched from Lebanese airspace into Syria, and this was probably meant as a warning shot regarding the weapons production facilities on the Lebanese side of the border. Third, Israel demonstrated that it will confront Iran as necessary. And fourth, the attack highlighted the fact that Russian air defenses will not protect Hezbollah-Iranian activities that violate Israel’s red lines.

If these limited efforts do not succeed in convincing Hezbollah and Iran to turn back on their weapons-production venture, Israel will be faced with two options.

First, Israel may opt to launch a preemptive strike on the production facilities in Lebanon. Doing so constitutes a blatant violation of the unwritten “rules of the game,” and its ramifications are accordingly difficult to predict. In responding militarily to this violation, Hezbollah would likely seek to preserve the existing understanding by punishing Israel’s violation while trying to avoid escalation to full-scale war. In delivering a limited response to the Israeli strike, the group would simply attempt to control the escalation as it has in the past. Unfortunately, escalation control is hardly an exact science; miscalculations have cost many lives along this border in the past, and are liable to do so again in the future. Recalling a previous error that led to the 2006 Israel-Lebanon War, Hassan Nasrallah lamented, “You ask me, if I had known on July 11 . . . that the operation would lead to such a war, would I do it? I say no, absolutely not.”

The benefits of a preemptive strike are not limited to the instrumental destruction of production facilities, which can be rebuilt and therefore do not represent a long-term solution. But they do signal a level of determination that includes risking an outbreak of war in order to prevent facilities from going operational. Breaking the established rules of the game may convince Hezbollah that it should cease its efforts to manufacture advanced weapons if it wants to avoid full-scale war. On the other hand, Hezbollah could also decide to in a manner that starts a chain of escalation to full-scale war. Overall, the results of a strike are heavily dependent on Hezbollah’s reaction which, in turn, will be based on fluid calculations regarding its strategic environment.

Should Israel choose to strike, however, the current situation presents an opportune moment to carry out a preemptive attack, as Hezbollah is disinclined to escalate the conflict for several reasons. First, the group is heavily involved in Syria and is not interested in fighting on two fronts (although this window of opportunity is contingent on the duration of the Syrian Civil War, which appears to be winding down). Second, President Trump’s strong support for Israel and hostile attitude towards Iran will likely translate into support on the bilateral and multilateral levels for Israeli actions that pushback against the aggressive posturing of the Iranian-led axis; the same may not be true of the next U.S. administration. Third, if Israel is striking to prevent Hezbollah from producing high-quality arms, the risk of attack will be lower before Hezbollah has had time to produce them. Doing so after the group has already manufactured advanced weapons could be costly if these arms are used against Israel in response to the strike. Fourth, the recent successes of Hezbollah and Iran in the region may provide a false sense of security that time is on their side to close the gap between Hezbollah-Iranian forces and those of the IDF (which does not necessarily reflect reality). If Hezbollah views the long-term trends as favorable to its positioning with respect to its Israeli opponent, it is less likely to risk all out war at present in order to confront adversaries like Israel from a position of greater relative strength in the future.

Should the strike lead into a full-scale conflict between Israel and Hezbollah, the Israeli Defense Forces (IDF) would likely emerge victorious due to its quantitative and qualitative edge over the Lebanese militia—although it is important to note that Israel would not emerge unscathed. Hezbollah possesses more than one hundred thousand rockets and missiles, and though the majority of them are of poor quality, dozens of these weapons have the potential range and accuracy to strike sensitive sites or population centers in Israel despite the latter’s cutting-edge missile-defense system. As a consequence, though insufficient to deliver Hezbollah a military victory, the group’s missiles could severely damage Israel’s infrastructure. Furthermore, Hezbollah’s status as a state-sanctioned organization neutralizes the potential strategic advantage it can derive from asymmetric warfare that plays to the advantage of a conventionally weaker party; any future war between Israel and Hezbollah will be more along the lines of a conventional interstate conflict in which Israel has an enormous military advantage. Although Hezbollah’s positioning as the “underdog” may set a lower bar for success (which includes little more than inflicting damage on Israel and its own survival), this will not negate the objective devastation that both Hezbollah and Lebanon would experience in the event of war.

Israel’s second option is to rely on its ability to deter Hezbollah from using advanced weapons, rather than preventing the group from acquiring them. Doing so avoids the heightened risk of escalation through enforcing Israel’s red line, but it also means that the IDF will have to cope with a more dangerous enemy along its northern border and a potential loss of credibility in regard to upholding its red lines. While adopting this approach may prevent the outbreak of “the most destructive Arab-Israeli war yet” in the short-term, it will likely increase the price of a future Israel-Hezbollah conflict in the long term.

Israel may consider this second option because of its purported success in deterring Hezbollah from attacking again after 2006, which many attribute to the heavy price the IDF inflicted on Lebanon in the previous conflict. However, drawing a direct connection between Israel’s ability to inflict damage and the current quiet along the Israel-Lebanon border is dubious, and there are two major problems with relying on this approach. First, deterrence is not an exact science and actors are not always rational (particularly those with radical religious ideologies). Second, deterrence is dependent not only the ability to inflict maximum damage on an adversary, but also how that adversary views its long-term prospects. For instance, if Hezbollah were to foresee its own decline compared to Israel for any number of reasons—reasons that do not necessarily relate to Israel directly—it is possible that the threat of overwhelming Israeli force may not be enough to prevent a future outbreak of hostilities. If Israel decides to rely on its ability to deter Hezbollah, the failure of this strategy would put the IDF up against a far more capable foe on land, sea and air.

Israel appears to have exhausted its low risk methods for stopping Hezbollah-Iran efforts to produce advanced weapons in Lebanon, and it is now faced with a choice: deterrence or preemption. Relying on the imperfect and uncertain idea of deterrence would entail unacceptable risks that are likely to increase exponentially over time. Instead, Israel should opt for a precision strike against Hezbollah’s production facilities while clarifying that it is prepared for, but does not seek, a wider war. Though a targeted strike has up-front costs and does not guarantee that Hezbollah will not rebuild its production facilities, failing to act will likely exact an even greater price in the next conflict, and could leave Israel poorly positioned to protect its interests in the future.

Ari Heistein is the special assistant to the director at the Institute for National Security Studies in Israel.

Is Israel Preparing to Strike Hezbollah? 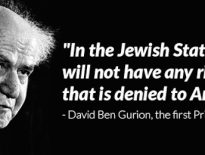 Commentary ‘Package deal’ with Putin needed against Irani…
0
wpDiscuz
0
0
Would love your thoughts, please comment.x
()
x
| Reply
We use cookies to ensure that we give you the best experience on our website. If you continue to use this site we will assume that you are happy with it.Ok