Trending
You are at:Home»Categories»Headlines»Iran’s Push for ‘Regime Change’ in Saudi Arabia and Washington
By Mehdi Khalaji on 20 September 2019 Headlines
Emboldened by their success in attacking Gulf and U.S. interests with relative impunity, Iranian leaders are now aiming to disgrace the Saudi royal family and foster Trump’s defeat in the 2020 election.

The greatest phobia of Iranian leaders is the idea of regime change, a perceived threat that has shaped their actions since the Islamic Republic was founded. Whenever they make weighty decisions about coming to the table for negotiations or becoming more aggressive militarily, they do so mostly out of fear of regime change.

For instance, Supreme Leader Ali Khamenei allowed nuclear negotiations in the past when he believed the regime’s hold on power might be threatened by heavy economic sanctions and related domestic developments. Today, however, he has reverted to his old line of refusing to speak with a U.S. government that is supposedly bent on toppling him. As he stated in a September 17 speech, “When America offers to negotiate, it does not mean finding a just solution; what it is means is ‘Let’s negotiate so you accept whatever I say’…In the course of the past forty years, [Americans] have failed to master Iran [despite]using all sorts of artifices; instead, their policies, one after another, have been mastered by the Islamic Republic’s policies, and thereafter, by God’s strength and power, they themselves will be mastered by the Islamic Republic.”

Since coming to power in 1979, the Iranian regime has never been able to fully normalize relations with the Saudi government, due in part to the kingdom’s status as a U.S. ally and the world’s foremost oil exporter. More recent developments have only worsened their mutual antipathy, from Riyadh’s gradual rapprochement with Israel, to the bloody conflict between the Saudi coalition and Iranian-linked forces in Yemen, to the 2016 attack on Saudi diplomatic facilities in Iran, which quashed any hopes of detente in the near future.

In addition to standing on opposite sides of various regional issues and conflicts, leaders in both countries have directed increasingly antagonistic rhetoric toward each other over the past few years. In Tehran, officials have repeatedly bashed the Saudi ruling family and expressed their hope that the monarchy will collapse. As much as the phrase “regime change” frightens them in reference to Iran, it is sweet music to their ears when aimed at the House of Saud.

For example, Khamenei’s annual Mashhad speech on March 21 includeda lengthy tirade against Riyadh: “Saudi Arabia is the region’s worst government: despotic, unjust, corrupt, and a puppet…Western governments announce that they will provide nuclear facilities and missile production bases to this government because they know it is dependent on them…We do not mind them building such things because in the near future, by God’s grace, they will be taken over by Islamic warriors.” During a 2018 speech, Khamenei even denied Saudi sovereignty over the holy cities, the bedrock of the ruling family’s domestic and regional legitimacy: “The Holy Kaaba and [Mecca and Medina] belong to all Muslims, not to those who rule over that territory.”

This year’s Mashhad address also proclaimed Khamenei’s confidence that Iran cannot be successfully attacked militarily, whether by regional or outside forces: “Today, everyone has concluded that the enemy is at war with us, and its manifestation is in economic issues…We will doubtlessly defeat the enemy in this war with God’s help, but that is not enough…We should also create deterrence…so that the enemy realizes he cannot pressure the nation through the economic sector…In the past, we were unable to confront the enemy’s air or missile attacks…But today, our enemies in the region or those who have forces in the region know that the Islamic Republic can respond firmly to any offensive with its high-precision missiles…The enemies who are sometimes tempted to launch a military attack should realize that it is not possible, that the Islamic Republic has a mighty fist with which it can retaliate.”

More recently, Sadollah Zarei—a member of the editorial team for Kayhan newspaper, widely considered a mouthpiece for Khamenei—issued an eye-opening military threat against Riyadh during a September 17 interview. After denying the possibility of full-fledged war with the United States, he warned that Iran’s objectives would be maximal in any regional conflict: “If Iran attacks Saudi Arabia, all Saudi ports, oil wells, and energy resources will be targeted, and the objective will be toppling the Saudi regime, not just partially suspending Riyadh’s oil exports.”

Iran seems to be doing its best to make President Trump’s first term his last. If Khamenei has concluded that the U.S. administration cannot afford to go to war during an election year, he may become more assertive in trying to destroy the president’s credibility and campaign messaging, mainly by taking steps that make him look like a loser on foreign policy toward Iran, energy, and the Middle East. This includes seizing tankers in the Gulf, attacking Saudi production facilities, and other actions that drive up oil prices to the point they become a political liability for Trump.

Ultimately, Tehran seems to believe it could claim credit for changing the U.S. “regime” while also making the next administration believe it has no choice but to back off on sanctions. According to this argument, a Trump loss in 2020 would make conditions more favorable for Iran in any future negotiations. Khamenei also appears bent on discrediting Trump in the eyes of America’s regional allies in order to weaken their own position in dealing with Iran.

Other Iranian figures have expressed similar ideas about how to change Washington’s posture. On June 27, 2018, President Hassan Rouhani portrayed “resistance” as the only wise response to foreign pressure, then suggested the Trump administration would not endure long: “Don’t think that the person who, as president of America, violates all international rules and commits injustice against all the world’s Muslims, can succeed; rather, he will see an answer to his unjust behavior.” And earlier this month, Amir Mousavi—director of the Center for Strategic Research, a hardliner institute close to the Islamic Revolutionary Guard Corps—declared that “the Iran dossier can lead to Trump’s defeat in the 2020 election.”

Although it is by no means clear that Iran can actually affect U.S. public opinion or electoral preferences, the regime would no doubt be thrilled if the rest of the world merely believed that it had such capabilities. For a fundamentalist regime like the Islamic Republic, the appearance of power is often just as important as actual power.

In the meantime, Iran continues to operate in the gray zone implied by Khamenei’s famous formulation that there will be “no war” with the United States, but no negotiations either—a strategy that has guided the regime’s actions throughout the region and given it a free hand to conduct bold destabilizing maneuvers against other states. Yet its recent threats against the Saudi monarchy and attacks on oil targets have crossed previously imagined limits and could escalate even further if left unchecked.

Therefore, while the United States should carefully avoid military confrontation with Iran, keep the door open for direct negotiations, and do more to clarify what it wants from the Islamic Republic, it must also find credible and sustainable ways to strengthen deterrence and reverse the latest spike in Iranian aggression. In addition, U.S. officials should expect the regime to become more creative in how it pursues its anti-Trump agenda; having tasted success on that front, it will surely do more. Continued inaction is not an option, since that would only feed Iran’s ambitions. For proof, one need only look at the Saudi Aramco attacks, which came after the regime was emboldened by the lack of substantial response to its attacks on Gulf shipping and a U.S. drone.

Iran’s Push for ‘Regime Change’ in Saudi Arabia and Washington 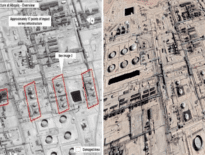 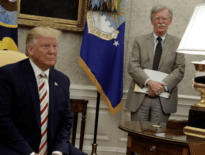 Headlines Bolton unloads on Trump’s foreign policy behind …
0
wpDiscuz
We use cookies to ensure that we give you the best experience on our website. If you continue to use this site we will assume that you are happy with it.Ok