The Saudi-led offensive against rebels in Yemen has lost its initial momentum. After breaking out of Aden and advancing into the lightly defended areas of Lahj and Ibb provinces, anti-Houthi advances have now reached areas where forces loyal to former Yemeni President Ali Abdullah Saleh, which include the Houthis, are more concentrated.

In the west, fighting has been focused on the city of Taiz, where the urban terrain and entrenched Houthi positions have slowed the offensive significantly. Houthi forces are, however, reportedly still consistently losing ground. Just as when they began losing control of Aden in July, Houthi forces have started to fire rocket artillery from positions removed from the city, indicating that severe opposition is forcing them to adopt maneuvers to stall approaching forces. 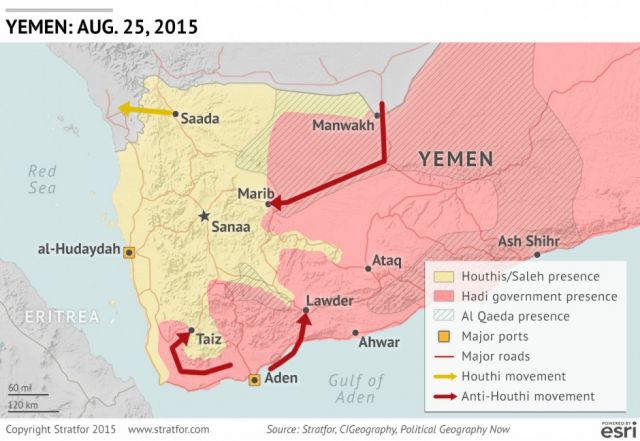 To the east, where anti-Houthi forces have already captured the city of Lawder, Houthi forces have successfully ambushed units in the Mukayras area, preventing northwestern operations into Bayda province. As forces reorganize following the breakout from Aden and as more resources are brought into the area, anti-Houthi forces will eventually be able to overpower Houthi and pro-Saleh forces in Yemen’s southern regions. Still, the loyalists’ momentum has undeniably faded.

In the north, Saudi Arabia is working to open another front in Marib. There have been reports of coalition forces reinforcing local fighters there, but no significant gains or offensive operations have emerged so far. Reports now indicate, though, that larger formations of armored vehicles arrived in Marib over the weekend, and a decisive offensive push driving west toward Sanaa, the capital, will likely become apparent soon.

Houthi fighters have not sat idly by while losing ground in southern Yemen. Instead, they have increased cross-border operations into Saudi Arabia in retaliation for Saudi operations in Yemen. According to reports, Saudi forces have vacated positions on the border in several areas and are instead simply suppressing Houthi activity with artillery. In most of the mountainous border area, Houthi forces do not present a strategic threat, though they have ambushed several Saudi military units, causing Saudi forces to abandon a substantial amount of equipment.

Meanwhile, a sustained bombing campaign has begun in Aden against the groups that recently regained control over the city – the Southern Resistance and troops loyal to embattled Yemeni President Abd Rabboh Mansour Hadi. There are also reports that al Qaeda in the Arabian Peninsula militants are openly moving through certain areas of the Aden Peninsula. But though the jihadist group has exploited the crisis to establish stronger control over certain locations in Hadramawt province, it is not entirely clear yet whether the fighters seen in Aden are actually members of al Qaeda in the Arabian Peninsula. They could instead be remaining elements of Houthi or pro-Saleh forces that are now conducting subversive actions in the rear of the coalition-supported forces.