Feminists and frat boys, asexuals, groupies, and that quiet kid who sits in the front row. A weeklong survey of what it means to be young and in lust (or asexual or aromantic) in 2015. 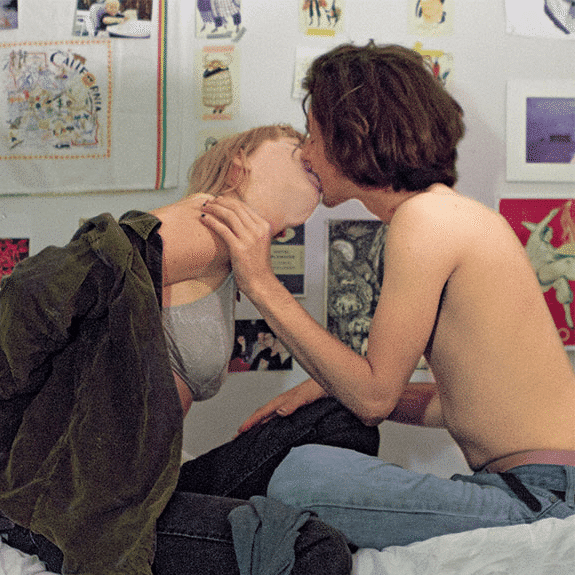 Darcy and Leor are in their first year at Bard College. Since Leor identifies as genderqueer, Darcy wonders if she is correct to call herself straight. Photograph by Lula Hyers, Bard class of 2019.

By Lauren Kern and Noreen Malone

It would seem to be a pretty confusing time to be a college student, at least as far as sex is concerned. The sexual revolution has been won, and many campuses resemble great drunken bacchanals in which men and women can choose to participate in no-strings-attached, or at least few-strings-attached, experimentations in lust — sex without stigma or shame. And yet, at the same time, news about the high incidence of rape has reached a fever pitch — leaving students, not to mention their parents, worried about their safety. College sex as both playland and minefield.

Hand-wringing over what has become known as hookup culture is nothing new, of course — the panicky-sounding term has been around for decades now. But a hookup is not always the blithe and meaningless sex with strangers that the term conjures. Even among college students, it’s defined differently from person to person and situation to situation. It could mean anything from kissing to intercourse, with a crush, with a friend, or, yes, sometimes with a relative stranger. The script, according to this ritual, is: First you fuck, then (perhaps) you date. Or, more likely, you just continue to hook up, creating a long-term relationship — minus feelings, theoretically — out of a series of one-night stands.

The apparent rise of rape on campus is more recent and more disconcerting. A new generation of activists has raised awareness of what appears to be a crisis: Studies show that as many as 25 percent of college women report having been raped, and college administrations have been repeatedly criticized for their anemic responses to alleged assaults. And the proposed solutions to the problem have created their own controversy. Some worry that the notion of “affirmative consent” — every step toward sex being explicitly agreed to with a “yes” — is overkill and unrealistic; others argue that it serves to protect both men and women in an environment where an unpredictable swirl of alcohol, hormones, newfound freedom, and relative inexperience can result in the best experience of a young life — or the very worst.

And yet, for all there is to worry about — and we old folks love nothing more than worrying about the sex lives of young people — campuses are still filled with college kids excited about one another and the thrill of a night that’s just beginning. To them, college sex isn’t a headline but something real. In an attempt to get past the existing media narratives, and the moralizing that comes with them, New York asked college students what they think about the campus-sex climate. Or, rather, how they experience it. All the photographs you will find below were shot by students. Their peers in the pictures were then interviewed about their experiences; all were open and eager to share about their lives (itself a generational phenomenon). We polled more than 700 of them and spoke extensively to dozens more about their sexual histories. The following pages are, as much as possible, a record through their eyes of what it means to be young and in college and sexually aware in 2015.

Hooking Up Is Easy to Do (but Pretty Complicated)

Some of what we learned was unexpected: It appears to be the case that, faced with either hookups or nothing, many students are simply opting out of college sex. Nearly 40 percent of the respondents to our poll were virgins. For some, it’s simply too disheartening to imagine your first sexual milestones achieved with someone whom you don’t know well (the problem with “backwards dating,” as one person calls it). Perhaps, too, there are fears at play: Both men and women said “rejection” was their greatest sexual fear; but for women, that is followed closely by “coercion.” But the general feeling among virgins and nonvirgins alike was that they were having less sex than their friends. Everyone, in other words, thinks they are the exception to a general state of wild abandon. It’s as if sexual freedom has become a burden as well as a gift.

There is a new kind of freedom, too: a seemingly infinite array of genders and sexualities. There’s plenty of that old classic, straight-girl collegiate lesbian experimentation, but there are also trans students and pansexual students and bi students and gay students — not to mention the asexuals and aromantics — all happily trying out identities on one another. Gender is now not just mutable, even the concept is optional, and identity comprises a set of categories that can be sliced as finely as you want: Be a demi-girl who identifies with the female binary; be a graysexual panromantic transman. Whatever best describes you.

In short, we encountered an almost bewildering variety of sexual experiences. At one Big Ten college, a basketball player bragged of his busy five-women-per-week hookup schedule — which, it turns out, makes him wistful for something more intimate. At Dartmouth, we heard from sorority girls who were beginning to wonder if hookups were worth it. At Tulane, we spoke to a couple who started hooking up after they matched on Tinder (though dating apps haven’t really caught on with most of the undergrad population — just 20 percent used them in our poll) and are having the sexual time of their lives. At NYU, we met an asexual happily in a relationship with another asexual. At Bard, a senior told us about how he’d had little interest in sex at all until he found “the meaning in it.”

So, yes, hookups are prevalent, but to a surprising degree, students are clear-eyed about what’s good and what’s bad about them. This seems to be another difference between the current generation and the preceding one: A decade ago, for a progressive college student to break ranks and say anything negative about hookups — that they could be used to reinforce gender imbalances, that it’s hard to shut down emotions, that sometimes they just felt shitty — meant she (or he) was aligning with the out-of-touch tsk-tsking adults. Now it’s fine for a forward-thinking college student to admit she finds the ritual “problematic,” to use a current-favorite campus term. Still — whether because of hormones, the impossibility of moving backward, the difficulty of making sense of your own feelings (let alone another person’s) at that age, the fear of being left behind — even those students who had rejected hookup culture for themselves wouldn’t go so far as to say that the entire system was flawed. Some people, after all, might feel empowered by it — the ultimate virtue in today’s feminism. It’s worth noting, too, that campus feminism itself appears to be in flux about the hookup — still focused on consent, to be sure, but also recognizing how that focus has blinded us to the basic issue of quality in sex, both physical and emotional. We’ve gone from safe sex to free sex to consenting sex — will good sex become the next movement?

What emerges from these stories and photographs and interviews is complicated: The issue of rape and sexual assault on campus is very real, and is also something that students we polled and interviewed — male and female — seem quite aware of. Yet despite the pall cast by this, college students also share a sense of optimism about the many ways for young people to explore their own identities and sexuality, to figure out who they are and whom they want to love. In fact, 73 percent said they’d been in love at least once already. If college functions as a kind of laboratory for the future sexual psyche of a generation, there is plenty of evidence that things might not turn out too badly for this one.

Keep checking back throughout the week for more on-the-ground dispatches, including the complex linguistics of the campus queer movement; lonely and not-so-lonely virgins; Sally Quinn on what it used to be like at Smith; and Rebecca Traister on what campus feminists should be focusing on instead of just consent.

*This article appears in the October 19, 2015 issue of New York Magazine.