Trending
You are at:Home»Categories»Headlines»Gazan Christians on Christmas: Escape from watchful eye of radical Muslims
By Jerusalem Post on 25 December 2019 Headlines

“Every year I pray they will give me a permit so I can celebrate Christmas and see my family.”

Since it’s Christmas and an occasion for good cheer, I’ll deliver the good news first. Here’s how The Jerusalem Post announced it:

“Christians in the Gaza Strip will be allowed to visit holy cities such as Bethlehem and Jerusalem at Christmas,” Israel authorities said on Sunday, reversing a decision not to issue them permits.

“In a break from its usual Christmas holiday policy, Israel’s military liaison to the Palestinians said on December 12 that in accordance with ‘security orders,’ Gaza Christians would be allowed to travel abroad, but none would be permitted to go to Israel or the West Bank… On Sunday, the liaison office, known as COGAT, announced on Twitter that its director has ‘extended the travel facilitations for the Christian population of Gaza for the Christmas holiday.’”

Thus ended Israel’s 2019 travel ban on Christmas visits from Gaza to Israel and the West Bank, which seemed oddly arbitrary and was never fully explained.

The ban came as a hurtful shock to Gaza’s tiny Christian community. Out of some 3,000 Christians who lived in Gaza in 2007 when Hamas seized power from the Palestinian Authority, it is estimated that no more than 700-800 remain, among a total population of some 1.8 million Muslims. Unsurprisingly, the Christian population continues to dwindle.

Today’s Gazan Christians, most of whom live in Gaza City, look forward all year to the chance to escape for a few days from the ever-watchful eye of radical Muslims. While breathing the freer air outside the Gaza Strip, they are able to enjoy the company of friends and loved ones who are close in proximity but physically unreachable during most of the year.

“Every year I pray they will give me a permit so I can celebrate Christmas and see my family,” Randa El-Amash, 50, told Reuters. “It will be more joyful to celebrate in Bethlehem and in Jerusalem.”

Thankfully, Randa’s family will be able to welcome her once again to the birthplace of Jesus, where the Christmas story began.

Along with Israel’s mind-change, another piece of good news wasn’t so widely reported. After the ban was announced, an intense and frantic campaign to dissuade Jerusalem about its Grinch-like prohibition of Christmas celebrations was informally launched. It emanated from an amazingly diverse group of petitioners: American Jewish leadership, Christian Evangelicals, international governments, think tanks, the Roman Catholic Church, Twitter protesters and venerable Middle East churches. Such mutual agreement on the issue – and Israel’s positive response – are noteworthy.

One of the outspoken voices in support of Gaza’s Christians was Nina Shea, my colleague at the Hudson Institute’s Center for Religious Freedom. She summed up the general reaction to the ban:

“Israel maintains that its government protects access for all religious groups to the religious sites that are under its control. In keeping with this, it is incumbent that it provide permits to all Gaza’s Christians to visit Christian holy sites in Jerusalem and the West Bank, especially during the great feast of Christmas, one of Christianity’s holiest celebrations. These Christians pose no terror threat, as Israel fully acknowledges by giving permits to travel abroad at this time.”

Thanks to myriad prayers and protests, the Israeli Christmas-ban story had a happy ending. Families and friends will be reunited, feasting will abound, and Christmas hymns will resound in Bethlehem, Jerusalem and beyond.

The bad news is that the continuous injustices and provocations faced by Gaza’s Christians carry on day in and day out during the rest of the year. It’s no wonder they want to flee the scrutiny of Hamas and other radical Islamists.

I spoke with my Gazan Christian friend Khalil Sayegh about what life is like for Christians in Gaza.

“Like all Palestinians in Gaza,” he began, “the Christians are suffering from the current situation in Hamas-controlled Gaza. They struggle with unemployment, lack of freedom of travel. They cannot hold government jobs. But, in addition to that, the Christians of Gaza are facing religious discrimination in various ways. Christians in Gaza have to tolerate being harassed in the streets just for being Christians. Their school children have to listen to all kinds of bad things about Christians in their classrooms, because Hamas controls their education, teachers and schools.

“And while Hamas claims to protect Christians, its presence in Gaza has empowered Islamist radicals who harass Christians and even physically attack them in some instances. Violence occurred a few years ago, when a Salafist jihadist murdered Rami Ayyad, [a Christian bookstore manager who was shot and stabbed to death in 2007]. And since then there have been several attempts to bomb Gazan churches.”

Khalid went on to say that even secular Gazans can’t work in the government. A man who wears a cross will be harassed. And in some parts of Gaza it is unsafe for women not to cover themselves and wear a hijab.

I asked Khalil if there are any Christmas decorations in Gaza. He explained that a YMCA facility is decorated, but only inside the building. Otherwise there’s no sign of holiday festivity in the streets. He recalled a Muslim merchant who donned a Santa hat one year, trying to inspire a little holiday spending. Angry authorities confronted the shopkeeper and demanded that he take off the Santa hat immediately.

“They reject any indication of Christian celebration,” Khalil explained.

I asked him why Americans and perhaps even Israelis know so little about all this.

“Nobody wants to talk about it,” he concluded. “Stay silent. It’s safer.” 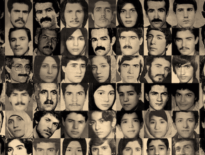 Headlines Ayatollah’s Son Has Access To Damning Tape R…
0
wpDiscuz
We use cookies to ensure that we give you the best experience on our website. If you continue to use this site we will assume that you are happy with it.Ok