To write anything about Saudi Arabia is to invite controversy. The country has been both an incubator and a victim of terrorism for years. It has been a strong American ally on a range of regional and international issues. The Saudi Kingdom’s support of Salafism worldwide for decades – scaled back in recent years – has also promoted an extremely intolerant form of Islam, often at the expense of more local, sometimes more tolerant, forms of that religion in Africa and Asia. A country that produced 15 out of the 19 September 11 bombers and whose texts were used initially by the Islamic State in Raqqa without much revision has a lot to answer for.

And today, the Saudis have become even more controversial. There is U.S. material support for the ongoing Saudi misadventure in Yemen. And there is President Obama’s veto of the Justice for Victims of Terrorism Act (JASTA), which had passed unanimously in Congress and would have allowed victims of 9/11 to sue the Saudis. Both Yemen and the JASTA veto can be seen as efforts by the current American administration to curry favor with a Saudi Arabia deeply disturbed by U.S. foreign policy in Syria and, especially, by the seemingly weak response of the Americans to Iranian adventurism throughout the Middle East. This is a concern, of course, widely held by Sunni Arab Muslims beyond the borders of the Kingdom and by many in the West.

But the Saudi reality has always been more complicated than either the rule of the Al-Saud or Saudi foreign policy, or even the presence of Salafism. It is clear that there are today sincere efforts to bring about some sort of reform within Saudi Arabia, especially in the economic sphere – reform that is as necessary as it is difficult.[1]

But even before these current reform efforts, even in the successful actions of extremists, one can discern an ongoing twilight struggle. I remember doing some research on leading Saudi extremist preacher Dr. Awad Al-Qarni and seeing a 2012 video in which he fulminated against the Al-Qasim Literary Club for having the temerity to think of organizing a session related to Abdullah Al-Qasimi and Abdul Rahman Al-Munif.[2]

Al-Qasimi was Saudi Arabia’s most notorious atheist, while the novelist Al-Munif was a leftist. Both were stripped of citizenship, calumnied, and died in exile. The fact that Al-Qarni (as well as the governor of Al-Qasim) were furious about the mere possibility of such an event was not unusual. That some Saudis would actually talk about doing such a thing was a bit of a surprise.

While the struggle of some younger members of Saudi Arabia’s embattled liberal class, like blogger Raif Badawi, have received considerable media attention, other, older figures are sometimes less known in the West.[3] One such heroic figure is the Saudi analyst, novelist and university professor Dr. Turki Al-Hamad. Some may be familiar with Al-Hamad through MEMRI’s extensive coverage of Arabic language reformers and free thinkers.[4] Ironically, one of Saudi Arabia’s most influential religious figures (there are many) also called him just that, as in “a hypocrite free thinker.”[5]  The Arabic terms used, munafiq and zindiq, are much harsher and dangerous than a plain English translation could convey.

In addition to MEMRI, if Al-Hamad is known in the West, it may be mostly through his literary work.[6] There was also some prominent media coverage a decade ago, including on BBC’s HardTalk and other outlets.[7]

Turki Al-Hamad was born in Jordan in 1953 to Saudi parents hailing from Buraydah. Interestingly enough, this town has been a notorious hotbed of both extremist Salafi activism and of eloquent critics like Al-Qasimi and Al-Hamad.[8] Al-Hamad was pro-Ba’athist as a teenager growing up in Al-Dammam, in the Saudi Eastern Province. He was imprisoned for over a year at the age of 18 because of his political activism before departing for study in the U.S. Al-Hamad has described the “revolutionary romanticism” of the Left that attracted Arab youth in those years and has compared it with how Islamism attracts the young today.[9]

Al-Hamad has noted that he remained a leftist when he came out of prison but that he had become more open to criticism of leftist ideologies, also adding that “the Turki Al-Hamad who went to America was not the same as the Turki Al-Hamad who returned.”[10] He studied first in Colorado and eventually received his doctorate from University of Southern California in 1985 with a dissertation on “Political Order in Changing Societies: Saudi Arabia, Modernization in a Traditional Context.” Al-Hamad described himself as a “committed Marxist” when he went to the U.S., but by the time he left, he rejected it as an ideology.[11] He retired early, in 1995, from university teaching at King Saud University after only a decade, to devote himself to writing.

While Al-Hamad attracted the attention of conservative clerics and the religious police early on, he was never one to hide his views. He began as a columnist in the Saudi paper Al-Riyadh and then moved on in 1990 to the higher profile pan-Arab daily Al-Sharq Al-Awsat. His first novel appeared in Arabic in 1995, part of a semi-autobiographical trilogy completed in 1999. Although the trilogy deals with controversial topics such as politics, sex, and religion, it is remarkably tame by Western standards, but still wild enough to have been banned in Saudi Arabia though relatively easy to acquire by a devoted, if small, reading public. As recently as 2010, the Saudi Minister of Culture questioned how these ostensibly banned books, printed by Beirut’s Dar Al-Saqi, could actually be appearing at the Riyadh International Book Fair.[12]

It is with the last novel of his trilogy, Al-Karadib, that the Islamists rose in anger. In the book, the main character muses that perhaps God and the devil are two sides of the same coin.[13] As a result, several fatwas were issued by individual clerics against Al-Hamad, who still lives in Riyadh, accusing him of apostasy and calling for his killing. Reportedly, then Crown Prince Abdullah offered bodyguards for Al-Hamad’s protection.[14] Al-Hamad has described the fatwas as more of a nuisance than anything else, while taking seriously the death threats that flowed from them.[15]
Al-Hamad on Al-Arabiya TV, MEMRI TV Clip # 235, August 25, 2004. 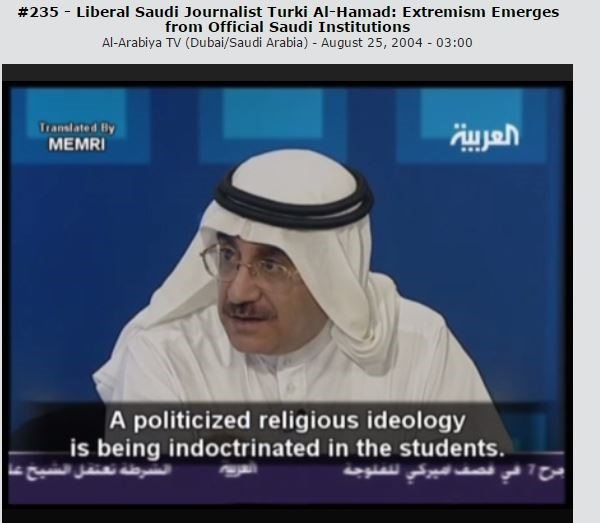 Often called a secularist and a Saudi liberal, al-Hamad usually eschews labels. He once described himself as “a human and a citizen who wants the best for his country and the people of his country.” To Al-Hamad the Saudi Arabian patriot, the necessary building blocks for a healthy society are respect for the dignity of man, for freedom, justice for all, and for equality. He doesn’t reject Islam but sees it in conflict with the totalitarian worldview embedded in Salafism, particularly in the discourse of the Saudi Sahwa (Islamic Awakening) movement which fed directly into the ideology of Al-Qaeda and the Islamic State. He noted that both the U.S. and Saudi Arabia had once used religious ideology as a political tool in the region but added that this is “a double-edged sword, which can be used by you but also against you.”

Al-Hamad’s latest brush with the authorities to date occurred in December 2012 when he was arrested after some controversial tweets (Raif Badawi was arrested earlier in 2012 and remains in prison). The tweets included:  “Neo-Nazism is on the rise in the Arab world under the guise of Islamism” and “Our Prophet came to rectify the faith of Abraham and now is the time when we need to rectify the faith of Muhammad.” While several hundred Saudi supporters and international groups like PEN lobbied for his release, Islamists celebrated and promoted his arrest under the hashtag #الزنديق_تركي_الحمد (The Heretic Turki al-Hamad).[16] He was released some months later and all charges were dropped.

Al-Hamad has described the challenge of extremist ideology in the region in this way: “The question is how we can stop ISIS. We cannot do it by fighting it, but by drying it up at the source. I am not talking about financial sources, or about its foreign sources – it’s not that we need to find out who stands behind ISIS in order to fight it. I am not talking about tracing the financial sources of ISIS. All these things may be of importance, but most important of all are the ideological sources. The youth who joined ISIS were driven by the notion of martyrdom. They had an extremist religious motivation. Call them ‘misguided,’ call them ‘deviant,’ or call them whatever you like, but the truth is that they’ve been brainwashed with this discourse and ideology. In order to stop ISIS, you must first dry up this ideology at the source. Otherwise you are cutting the grass, but leaving the roots. You have to take out the roots. These roots are in people’s minds and nowhere else. “[17]

Dr. Turki Al-Hamad is a brave and principled man, but he also is a part of a much broader, loose movement of liberal intellectuals and activists existing in the Arab world – and including many in Saudi Arabia – who refuse to be silenced, refuse to flee to the dubious comforts of exile, and still fight for what they believe in, despite the dual threats of state authoritarianism and rampant, aggressive Islamism. They are woefully outnumbered and under-supported but they exist and they remain. They usually lack the patronage system and subsidized sub-culture from which Islamists have benefited for decades, but they persevere, even though liberal prospects in the region seem further from fruition than at any time since the beginning of the so-called Arab Spring.

But these are also people writing their own epic journeys and struggles – not those fashioned by the salons and NGOs in America and Europe – in a Middle East that is changing, at times seemingly for the worse.

We can and should openly and aggressively criticize many things about the Saudis, including a plethora of all too frequent, gross violations against the dignity and human rights of individuals. But that place where Turki Al-Hamad and so many others inhabit and fight for is broader, perhaps, than we give it credit for in our sweeping denunciations. It is broader and more nuanced than the subsidized crazies and political hypocrisy, than the numerous promoters of violent and intolerant Salafism, and, while the hour is late, the clock has not yet chimed and hope still remains.