The Bahrain Football Association authorised a convicted match-fixer to organise a friendly international on its behalf while under the leadership of the favourite to become the next president of FIFA, Sky News can reveal.

Sheikh Salman Bin Ebrahim Al Khalifa was president of the Bahrain FA (BFA) in 2010 when it engaged a fixer, posing as a legitimate agent, to arrange a friendly against Togo.

Sheikh Salman is now the front-runner to succeed Sepp Blatter in next month’s FIFA presidential election.

The match, played on 8 September 2010, became notorious after it emerged the Togo team that lined up in the National Stadium in Riffa were imposters.

Bahrain won the match 3-0, with five other goals ruled out for offside.

It emerged after the match that the genuine Togo national team had been on a bus back from a match in Botswana at the time the imposters were playing Bahrain.

Documents seen by Sky News reveal the BFA gave authorisation to Wilson Raj Perumal, a Singapore national convicted for match-fixing, to arrange the game against Togo. 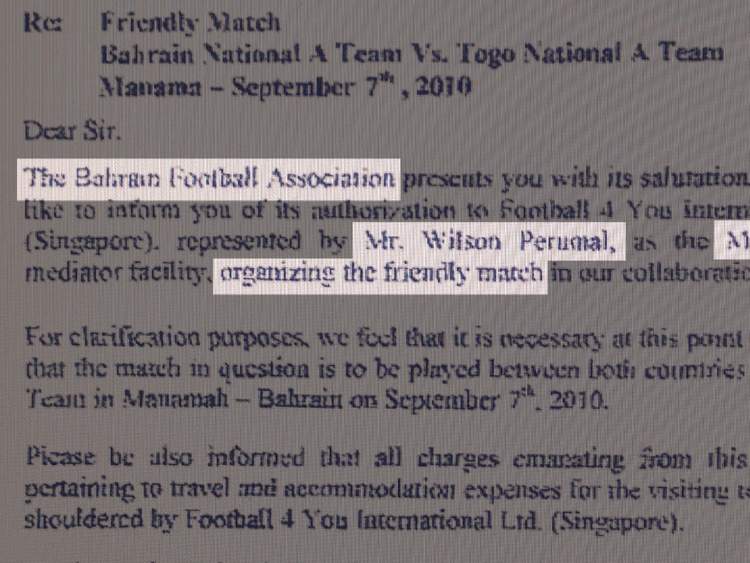 Perumal was jailed for fixing in Singapore in 1995

Perumal was jailed for fixing in Singapore in 1995 and at the time of his dealings with Bahrain was wanted for an unconnected offence.

In 2011, months after arranging the Bahrain versus Togo game, he was jailed to two years for fixing in Finland.

:: Who is Sheikh Salman?

The letter, from the BFA assistant general secretary to the Togo Football Association, dated 9 August 9 2010, states: “The BFA presents you with its salutations and would like to inform you of its authorisation to Football 4 You International Ltd (Singapore), represented by Wilson Perumal, as the Match Agent mediator facility, organising the friendly match in our collaboration.”

Football 4 You International was a front company, registered in Singapore, used to arrange several suspicious matches identified by a FIFA investigation.

The chairman of the Togo Football Federation, Seiyi Memene, said after the match: “The players who took part in the friendly match against Bahrain were completely fake.”

Bahrain manager Josef Hickersberger said the Togo players had not been fit enough to play for 90 minutes.

Despite suspicions about the Togo team being reported around the world following the match, the Bahrain FA did not report the game to FIFA.

In an interview with Sky News, Sheikh Salman denied any wrongdoing.

“We did not know. When somebody brings you the Togo national team you won’t know the team,” he said.

“How would I know the players? Once it was reported we co-operated with FIFA officials to know exactly what happened.

“FIFA took action against the agent.”

Sheikh Salman has promised to reform FIFA’s reputation and its corporate governance if elected next month, but has said he will be a hands-off non-executive president, leaving day-to-day business to FIFA’s executive.

In his manifesto, he says he will “evaluate whether current policies towards match integrity are working” and may propose “the creation of a global integrity and anti-corruption agency”.

But the Togo match may raise questions about his ability to provide the necessary oversight to lead FIFA out of its current crisis.

“When all is said and done the responsibility for an association’s integrity goes from top to bottom, to my mind,” Mr Steans told Sky News.

“You can’t keep arresting players for match fixing when people at the top have allowed the fixers to use their association.

“Sheikh Salman was at the top of the Bahrain FA. Although I don’t feel he should have total responsibility, he does have to carry some.

“He is the president, he should know what is going on in that association.

“Will he have the support to keep him informed. Will he act on what he gets? That is a question for Sheikh Salman.”