A high-profile trial against businessmen, a former minister, and two dozen accomplices shines a spotlight on illicit cigarette production, widespread smuggling, and the government’s struggle to hold its officials accountable.

Behind a large dark desk buried in stacks of papers, lawyer Wasafi Abu Rumman lights up a Davidoff Gold slim and announces that his client, the chief defendant in a cigarette counterfeiting and smuggling scandal, is innocent.

Prosecutors say Mutee produced counterfeit cigarettes in Jordan’s low-tax, free trade zones, which are designed exclusively for goods manufactured for export, then used his government connections to smuggle them onto the domestic market and sell them throughout the country.

They also say Mutee and his counterfeiting ring evaded nearly 539 million dinar (US$760 million) in taxes and customs charges, although the State Security Court indictment doesn’t provide a time period for the allegations.

The trial of Mutee and the other defendants is the biggest Jordan has seen in about 15 years, “in this magnitude — and this huge amount of money,” said Rana Husseini, a senior reporter at the Jordan Times and a human rights activist. “We’ve never had such a story.”

Lawyer Abu Rumman said the case “doesn’t go beyond infractions of customs or taxes, if there were any.”

It had only become high-profile because of public gossip, he said, puffing away as he discussed the case while fielding brief visits by colleagues and calls from his wife. He dialed for an assistant to fetch some papers, then leaned forward as he spoke.

“Smuggling,” he said, “has happened since the dawn of time.”

In a country where corruption is seen as rampant, the Mutee case feels unusually high-profile. The affair involves top government officials, 25 companies and 27 defendants — six of whom are now on the run, including Mutee’s son, Bashar.

Among the defendants are Wadah Al-Hamoud, Jordan’s former general director of Customs, and Mounir Aweys, a former Minister of Water and Irrigation. Both were imprisoned at the end of January, though Aweys was released on bail in June.

According to the indictment, Al-Hamoud allegedly accepted bribes from Mutee to turn a blind eye to the counterfeit cigarette smuggling and tipped him off to upcoming raids in the Zarqa free trade zone, which is some 35 kilometers northeast of Amman.

Al-Hamoud is accused of transferring customs officials who tried to oppose the smuggling, or forcing them to retire. His lawyer did not respond to multiple requests for comment.

One of the defendants, Salem Al-Khasawneh, a former customs officer in the southernmost Aqaba region on the Red Sea, earned the nickname “the Octopus of Aqaba Customs” for facilitating the smuggling.

The indictment accuses Mutee and another defendant of establishing in 2006 factories in the Zarqa free trade zone that would be producing cigarettes for export. Instead of exporting the cigarettes, however, prosecutors said they bribed customs officials to allow them to bypass customs fees and taxes and sell them domestically. As the business grew, Mutee and his accomplices set up companies — under the names of friends, family, and other defendants — to manage operations, with a headquarters in Amman.

The operation spread to the Aqaba free trade area, other similar low-tax development zones, and parts of the country without tax exemption. They smuggled tobacco and filters, and the cigarettes were produced in the Zarqa free trade zone to avoid paying taxes, the indictment says. They labelled tobacco brought from Aqaba to Zarqa as natural fertilizer. The brands they imitated included some of the most popular cigarettes around the globe: Marlboro, Winston, and L&M.

A pack of legal cigarettes in Jordan costs around 2 dinar ($2.80), and cigarette taxes bring in over $1.7 billion, according to Jawad Anani, a former deputy prime minister and foreign minister. 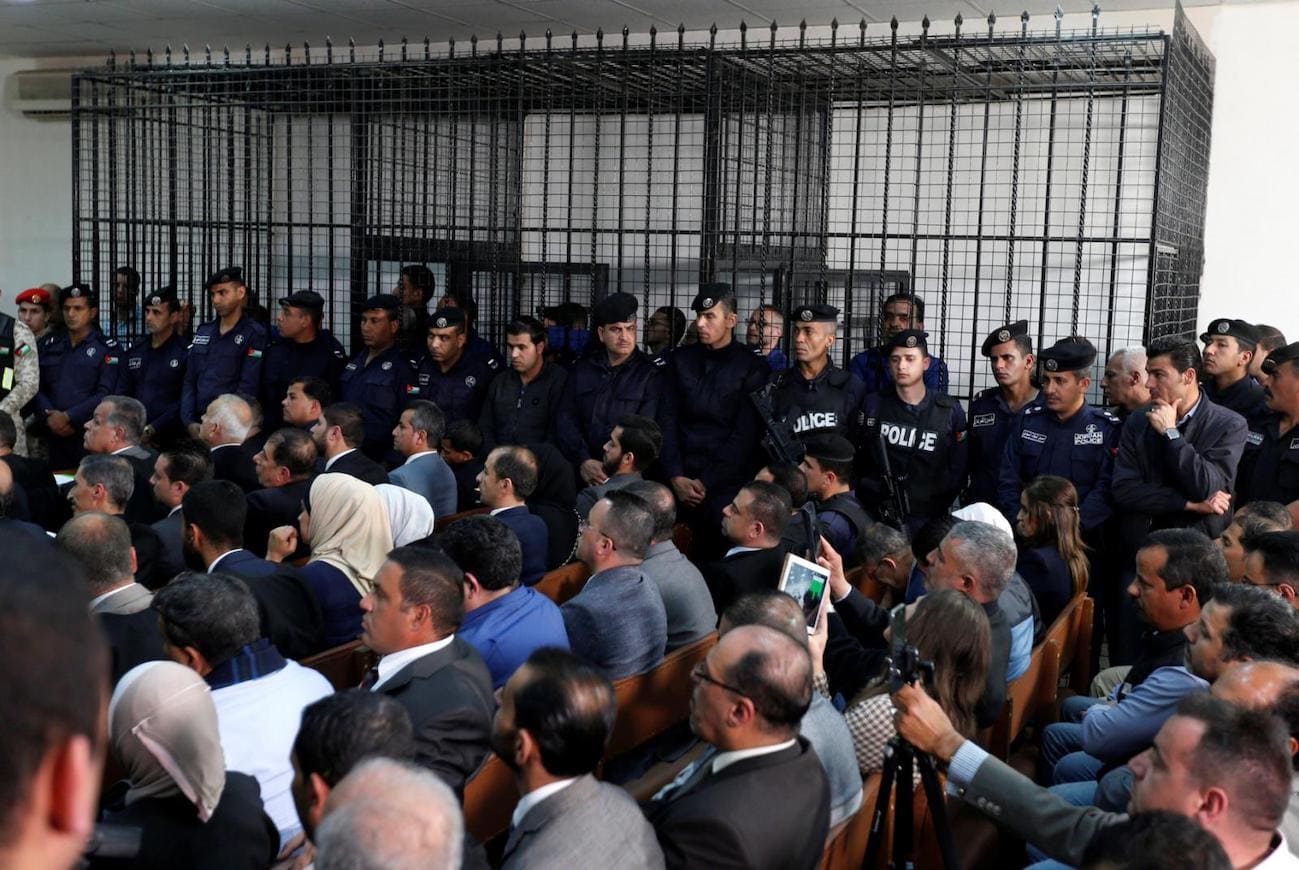 The businessmen and customs officials charged with tax evasion are seen behind bars at the State Security Court in Amman, Jordan, on March 12, 2019. REUTERS/Muhammad Hamed

A Change in Leadership, and Tactics

Counterfeit cigarettes, smuggling, and corrupt officials are nothing new in Jordan, but a change in government precipitated a new effort to tackle graft that even King Abdullah II has weighed in on.

Prime Minister Omar Razzaz took over a year ago from Prime Minister Hani Mulki in the wake of protests over austerity measures and promised to stand up for the rule of law and fight corruption. But his efforts have not satisfied everyone.

Late last year, the king’s half brother, former Crown Prince Hamzah bin al-Hussein, seemed to publicly criticize on Twitter government efforts to change the culture of corruption, saying that Jordan needed to rebuild “trust between the state and its citizens, without repeatedly returning to people’s pockets to rectify the accumulated mistakes.”

And in February, a former royal adviser and minister challenged the king to tackle corruption and called him out for being complicit in graft, saying the royal family should return “stolen” money to national coffers.

Razzaz has also struggled to fix Jordan’s declining economy. Nearly one in five Jordanians are unemployed, with young people the least likely to find jobs. According to the finance ministry, the national public debt stood at $40 billion, or nearly 95 percent of GDP, at the end of April.

One of the elements of Razzaz’s anti-corruption efforts is the high-profile Mutee cigarette trial, which came to the fore a month after the arrival of his government when the issue was raised in the Chamber of Deputies.

A government statement issued days later via its news agency, Petra, said the General Customs Department had stormed four sites, and found raw materials for cigarette production, including tobacco, paper, and filters. Another raid found a counterfeit cigarette production line at a company registered as a juice maker.

The statement also said that Mutee had fled a day before the raid. According to the indictment, Mutee visited Al-Hamoud, the former customs boss, at his home a night earlier and gave him 50,000 Jordanian dinars ($70,000) for warning him about planned enforcement actions.

Hilda Ajeilat, CEO of the Jordan Transparency Center, an anti-corruption organization, said there are “very important people who facilitated all of this,” including helping smuggle the machines and raw materials and assisting Mutee’s escape.

Abu Rumman, Mutee’s lawyer, denied this. He said his client left the country a week before the raid, first to Lebanon, then to Turkey, Georgia, and back to Lebanon before settling in Turkey.

Interpol posted an international warrant for Mutee in August. He was then extradited to Jordan in December, reportedly after Jordan’s king raised the matter with Turkish President Recep Tayyip Erdogan.

Abu Rumman will have plenty of time to prepare his defense. The prosecution has a list of 141 witnesses, and Mutee’s lawyer predicted the hearings would likely drag on beyond 2020.

Since the start of the trial, the ill health of some of the defendants — including Mutee himself — have delayed proceedings more than once. Moreover, the trial judge was sent into retirement in July for unknown reasons.

Despite an initial media blackout — the standard in high-profile investigations, according to Husseini, the senior Jordan Times reporter and activist — the opening session of the case was televised, unusually for Jordan. The affair has drawn attention, and ordinary citizens have been exchanging comments on social media.

Fed up with corrupt officials who typically evade prosecution, Jordanians said they are eager to see the case go to trial, although many are skeptical that the high-ranking defendants will be found guilty or punished. Many feel that prominent figures rarely are.

“You don’t see corrupt people behind bars,” said Ajeilat of the Jordan Transparency Center. “So people never trust anything the government says or does.”

The country’s former Minister of Justice, Ibrahim Aljazy, sounded a similar note in an interview earlier this year.

After “years and years of mismanagement by the government and other agencies,” the public’s trust has been “damaged,” Aljazy said, noting that the government is trying to use this case to regain it.

He also said he strongly suspects certain corrupt high-level government officials knew about the illicit cigarette trade and had turned a blind eye. “It was not unveiled out of the blue,” he said.

The public’s mistrust is only reinforced when the government is seen to be favoring the powerful and well-connected — such as when the siblings of four MPs recently received government posts.

The same goes for a 2012 case when reports said the Royal Court told a parliamentary committee not to bring a former minister facing corruption allegations, Sahel Al-Majali, to trial. His father, Abdelhadi Al-Majali, was previously the speaker of parliament, where MPs have been known to smoke, despite a law banning smoking in public places. The law is mostly ignored.

More than half of all Jordanian men smoke, wrote Amman mayor Yousef Shawarbeh in the Guardian earlier this year.

Counterfeit cigarettes are an accepted part of the culture.

“People think they’re higher quality but they’re not,” said a shopkeeper in Amman, who asked not to be named for fear of identifying himself as a former seller of illegal goods, including “Elegance” cigarettes and other fakes, before his shop was raided. It’s just how street sellers like him try to market them.

A 24-year-old smoker who grew up in Zarqa said there are fewer counterfeit cigarettes on the street than a year ago, but they are still not hard to find. “You can go downtown and find them in 100 places, but it’s definitely less easy,” said the man, who didn’t want to be identified out of fear of repercussions for criticizing the government.

Mutee is “a very clever man,” said a 35 year-old taxi driver who also expressed concerns about criticizing the authorities. “We have many like Awni Mutees. … Awni Mutee for cars, Awni Mutee for cigarettes, not only one.”

The indictment says that Mutee and one other person long made falsely branded cigarettes in Iraq and Syria, and that, in 2006, they began manufacturing them in the Zarqa free trade zone in Jordan. An investigation by ARIJ, a local investigative outlet, noted that Mutee was accused by a former business partner of being behind the production and smuggling of counterfeit Cleopatra cigarettes to a number of foreign countries, especially Vietnam.

Mutee, who at one point held an honorary position at the International Human Rights Commission, has had leading roles in companies in Romania, Cyprus, and Panama, according to OCCRP data.

Abu Rumman said Philip Morris and British American Tobacco complained about Mutee imitating their trademarks in 2008. He said it ended in a settlement.

Mutee is now in prison and smuggled cigarettes are available all over the country, Abu Rumman said. “Where are these cigarettes coming from?”

The lawyer’s Davidoff slim lies extinguished in a thick glass ashtray on his desk. “The market is full of them,” he said, picking up the little golden box. “These cigarettes are smuggled.”