Once known for its resilience, the country’s fragile financial system has triggered angry protests

In 2008, as mountains of bad debt collapsed and economies around the world crumbled, carefree gamblers at the central bank-owned Casino du Liban rolled dice and spun roulette wheels. Unscathed by the global financial crisis, Beirut glittered as the Middle East’s party capital and purveyor of discrete financial services.

Lebanon offered wealthy investors something they could not get elsewhere — high interest rates for low risk investments. While the rest of the world’s central banks tried to boost post-crisis recovery by holding borrowing costs at 1 per cent or less, the Banque du Liban pushed rates up so high that returns of more than 10 per cent became common for depositors. The central bank paid so much because it badly needed a constant supply of dollars to maintain a currency peg against the US dollar, pay for imports and fund the government. “Lebanon relies on remittances,” Riad Salame, central bank governor, told the FT in 2018.

That reliance on money from overseas left the government vulnerable and sliding ever further into debt, especially as economic growth has been sluggish since the start of the Arab spring in 2011. A bungled October effort at raising funds via a tax on WhatsApp calls triggered Lebanon’s biggest protests in over a decade, adding to the political paralysis and deepening the economic crisis.

Now the debt-fuelled crash Beirut avoided in 2008 could have finally arrived. Rating agency Fitch is predicting default on $88bn of Lebanese public borrowing. The country’s apparent powers of resilience, even as it was surrounded by instability, suddenly look more like luck — and Lebanon is in its most precarious position since its civil war ended in 1990.

A harsh economic collapse at the heart of the tumultuous Middle East would hurt Lebanon’s poorest most, at a time when public opinion is already enraged by perceived corruption and cronyism. “It will be very very hard,” says Sibylle Rizk, public policy director at Kulluna Irada, a lobby group, “and the possibility of violence and social unrest is high.”

With its nearly 7m population of Christians and Sunni and Shia Muslims, including over 1m refugees, Lebanon is surrounded by trouble — civil war has raged in next door Syria since 2011 and tensions with neighbouring Israel are continuous. Iran-backed Shia Islamist paramilitary and political party Hizbollah, seen by many Lebanese as a defender against Israel but viewed by Washington as a terrorist group, now forms an integral part of Lebanon’s government, souring relations with Gulf countries that were once Lebanon’s sponsors. 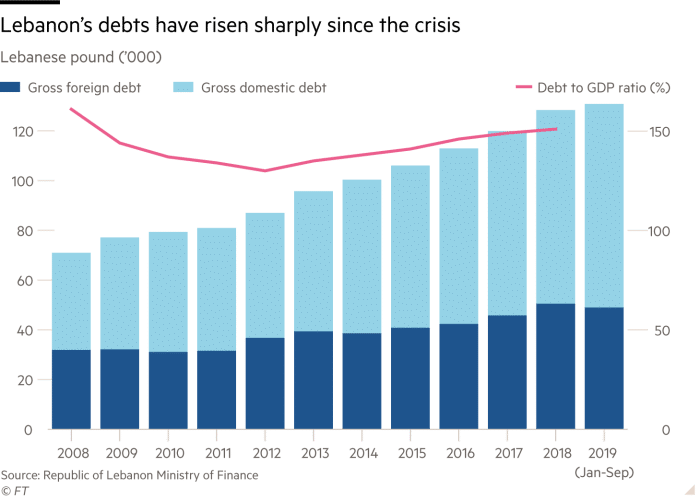 Yet even amid these tensions, Beirut’s high life, yacht-friendly marina and banking secrecy made it a playground for the Middle East’s wealthy.

The central bank borrowed from Lebanese commercial banks, who borrowed from their clients. Lenders “could generate profits at very low risk”, says Nasser Saidi, a former central bank vice-governor. “For each bank it looked like this was paradise.” The banks’ deposits with the central bank grew by over 70 per cent from 2017 to August 2019 to 229trn Lebanese lira.

For some observers, the numbers did not add up. “What could the central bank be investing in to pay those rates?” says Mr Saidi. But as banks paid out dividends to shareholders, many of whom were politicians, Lebanon’s political elites were happy to go along with it. “Everybody got greedy,” shrugs one bank board member.

Meanwhile politicians were spending the country deep into the red, buying votes by expanding public hiring and wasting cash on unsustainable solutions for Lebanon’s chronically malfunctioning electricity sector, while its trade deficit ballooned.

Amid the growing warnings about a looming default, Mr Hariri had begun to beseech international allies for help and started talks with the IMF. The west has little interest in seeing this crucible of regional tensions explode. The rise of Iran-backed Hizbollah means it can no longer depends on Gulf bailouts.

But while many capitals from Paris to Tehran want influence in the strategic Mediterranean nation, no state has so far offered to foot the bill. Asked whether an aid packaged was on the table, David Schenker, the State Department’s assistant secretary of state for near eastern affairs, told the Associated Press: “Lebanon is not being saved from its financial mess.”

Hundreds of thousands have demonstrated since mid-October against political corruption, bad governance, poor infrastructure, and economic unfairness. Beirut’s downtown area, where bank headquarters are concentrated, has been filled with graffiti and tear gas.

This “so called revolution” took the lenders by surprise, says Riad Obegi, chairman and general manager of Banque Bemo, a Lebanese bank. The disruption of the protests “creates lack of confidence,” he adds, which led to a rush of depositors trying to send money abroad. But banks had put half of their assets in the central bank to earn high rates, which meant that honouring the transfer requests would have gutted the country’s reserves.

In October, the country’s banks, which had managed to stay open during Lebanon’s bloody civil war, closed for two weeks. The union of banking workers said it was for safety; economists suspected they were low on dollars and trying to avert a bank run. But by closing, argues Mr Saidi, the banks themselves triggered panic, while their informal capital restrictions generated an “accusation that the big depositors were able to get out”.

When they reopened, guarded by soldiers, clerks told panicked customers they could not send money abroad, nor withdraw large sums in dollars. “We’re all in it together,” bankers told clients — but rumours swirled that the politically connected mega-rich had already got their money out, even as customers could withdraw only $200 per week in cash.

Amid fears about whether their leaders can protect their savings, many Lebanese worry that the government might choose to prioritise foreign creditors, who hold nearly $12bn worth of Lebanon’s debt.

So far the central bank has managed to cover the government’s repayments to its creditors — who are mostly domestic banks. However, multiple downgrades of Lebanon’s sovereign debt in the past few months suggest time could be running out.

Locking down Lebanon’s traditionally open economy with informal capital controls further discourages the all-important inflow of dollars. Indeed, the country had already been witnessing a net capital outflow since January 2018, according to Goldman Sachs research. And it has throttled businesses. According to Infopro Research in Beirut, 160,000 jobs have been lost since the beginning of October and one in 10 companies have closed. Hospitals are strained after losing bank overdrafts which they had used to cover money they are owed by the government.

For years, Lebanese had been assured that their banking sector was safe, and the sense of betrayal is palpable. Protesters have splattered the locked Association of Banks in blood red paint. People spend hours in banks trying to extract their own money to pay rent.

“You see people how shocked they are by the fact that they can’t access their money,” says Ms Rizk. “It’s because they have been simply deceived.”

The foundations of Lebanon’s crisis were laid three decades ago, when 15 years of fratricidal civil war finally came to an end in 1990. Before he became Lebanon’s prime minister in 1992, Rafiq al-Hariri — who was assassinated in 2005 — was a construction tycoon who controlled Lebanese lender BankMed. (Saad al-Hariri, the recently resigned premier, is his son).

To attract investment for postwar reconstruction — and having made his fortune in Saudi Arabia — the billionaire enlisted Gulf petrodollars to invest in Lebanon. And although Lebanon was variously occupied by Israel and Syria until 2005, confidence in Mr Hariri’s vision grew, and money and people returned to Lebanon during the 1990s and early 2000s. Mr Hariri started borrowing from international markets, and his successors did the same.

By 2019 the state was using almost half its revenues to service external and domestic debt — the other half largely went on public wages. Warlords-turned-politicians had bought votes by hiring public sector workers from their constituencies. Meanwhile corruption flourished, as the state ran opaque tenders for government contracts.

Despite all the money which came to Lebanon, says Ms Rizk, “we have no infrastructure, no productive sector. We have nothing. All this money was burnt on consumption . . . through imports and real estate, which is a bubble, and to defend the peg.”

Holding the currency peg had helped to stabilise the economy, but it is not known at what cost — and the potential impact of devaluation will fall most heavily on ordinary Lebanese savers who kept their money in Lebanese pounds. The IMF says the pound is around 50 per cent overvalued.

When asked this month where the exchange rate was going, Mr Salame responded: “no one knows”.

Along with politicians, Mr Salame, once Rafic al-Hariri’s personal banker, has become a figure of fury for the protesters. A banker at Merrill Lynch for two decades he returned to Beirut in 1993 to lead the Banque du Liban — and never left.

As governor, Mr Salame is credited with stabilising an erratic currency by establishing a pegged exchange rate between the US dollar and the Lebanese pound. “His whole legacy, his whole metric of success in his mind and the people’s mind, is the peg,” says Dan Azzi, a Harvard fellow and former top banker with Standard Chartered in Lebanon.

But from 2011, the dollar flow he needed to defend the pound started to ebb as neighbouring oil economies, home to the bulk of Lebanese expatriates remitting dollars back to Beirut, slowed down. War in neighbouring Syria has also increased Lebanon’s vulnerability. The government continued to rack up debt, and imports grew. Mr Salame had to come up with something drastic.

In 2016 he began a succession of unorthodox measures which he called “financial engineering”. Put simply, banks lent their customers’ dollars to the central bank at sky high interest rates in return for buying up swaths of government debt in swap operations — on terms that generated profit for Lebanese banks.

The central bank and Lebanon’s commercial banks’ balance sheets became overlapping. “We say there is one bank in Lebanon with 40 branches,” joked the bank board member. In his interview with the FT, Mr Salame said that all deposits in the central bank — including those of commercial banks — were its legal property.

But by 2016, argues former IMF official and economist Toufic Gaspard, who anticipated the crisis in a 2017 paper, the central bank “became a Ponzi scheme. It was borrowing from banks to pay them their interest.”

Mr Salame rejects this accusation. The financial engineering was to buy time, he said, for politicians to reform the bloated government and curb spending. But the stability it bought “is not a pretext not to do reforms”, he insists. He warned that Banque du Liban should not be used for politics: “The central bank is not an instrument to be used in order to force certain changes.”

The state depends on the central bank to meet its dollar debt servicing obligations, which will cost around $4bn next year. But rating agencies say that on a net basis, the bank’s foreign currency holdings are negative. Its forex reserves will be $28bn by the end of the year, yet Fitch estimates that the central bank’s dollar liabilities to Lebanese banks stand at $67bn.

Moody’s says requests to the IMF are “credit positive”, and a new government — under Mr Diab — may start talks about a new loan programme, which could provide some much-needed financial stability. But first the fractious political factions — including Hizbollah — have to form a government.

They will also need to win back the support of a sceptical public. “The whole political system was bought with this Ponzi scheme,” says Ms Rizk.