Trending
“Dear Dr. ____, esteemed university president, I am pleased to send my best wishes to your excellency and to inform you that I have received a letter from the deputy national defense chief regarding the desire of the European Union’s Erasmus [student exchange]program to work with Egyptian universities on the selection of student candidates. They are to travel to Europe in the context of their course work outside of Egypt. We have come to know that several of the courses [in Europe]have aimed at instilling values and concepts (homosexuality, acceptance of the other, particularly Jews and Israelis, etc.) meant to break up society and the family and do harm to national foundations. I hereby ask with all due respect that you not cooperate with these courses without obtaining security approval in this regard.”

The letter, which was labeled “confidential, important and highly urgent,” was sent to the university president, whose name and whose university I was asked not to disclose, from the office of Egyptian Education Minister Mahmoud Abu al-Nasr.

Like Israel, in Egypt too, international institutions’ cultural and educational programs have been met with suspicion and even hostility. The concern has been over the programs’ interference in “the country’s internal affairs” not only when it comes to foreign, economic and legal policies but also harm to “national foundations” and the structure of society, as the education minister’s letter would have it.

In Israel, the education and culture ministers as well as the strategic affairs minister are responsible for the subject, whereas in Egypt, it’s the intelligence service that sets the rules. Maybe in Israel, the subject will soon be dealt with by the Shin Bet.

The interesting and outrageous aspect of the letter relates to the definition of “the other” against which the Egyptian society has to defend itself. Protecting against the influence of gays, Jews and Israelis on the fabric of Egyptian society is essential to preserving the purity and unity of society. Any attempt to teach that these “others” should be accepted harms the country’s security and therefore any curriculum devoted to such a purpose undermines the nation’s foundations.

It’s all right to cooperate with Israel on defense and economic issues and join forces with Israel to fight terrorism and buy natural gas from the Israelis, but Egypt needs to ensure that it is not polluted by the cultural influences that Israel or the Jews in general might export to the country.

In Israel, one can actually understand the Egyptians’ fears. After all, Israel has banned Palestinian poets from the school curriculum. A novel about a romantic relationship between an Arab man and Jewish woman was struck from the general high school reading list in Israeli schools. And films depicting the cruelty of the occupation are perceived as a threat to national values in the country. So it shouldn’t be surprising that a country like Egypt is adopting a similar policy when it comes to Israelis and Jews.

But we can all relax. Israel, the Jews and gays are not the only “others” whose influence the public needs to be protected from. Egypt is full of “others” who exist in its midst and damage its purported unitary character. In addition to these three, there are also Egyptian women who wear a niqab, the Muslim head-covering that leaves only the woman’s eyes visible.

Last month, a female member of the Egyptian parliament, Ghada Ajami, sponsored a bill that would bar women from wearing the niqab in public places, including hospitals, schools, and government and non-government offices. In support of her bill, Ajami said a society that is “living in difficult security conditions and is fighting terrorism” has the right “to bar the wearing of the niqab in public places because it conceals the identity of the person wearing it.” Ajami later retracted the proposed legislation but the debate that it sparked on social media didn’t abate. Security arguments are no longer accepted as self-evident, particularly when the Egyptian regime is waging all-out war against religious organizations whoever and wherever they may be.

But one person who has come to the defense of women, both religious and non-religious, to wear what they wish is Nawara Negm, who in a lengthy, well-honed and sharp article on the Mada Masr website actually took aim at the country’s intellectual elites, “all of whom express themselves as if they were citizens of the European Union and as if Egypt were completely subject to the international treaty on human rights.” The intellectuals who have expressed support for the ban on the niqab have argued that women could be carrying explosives on their bodies en route to committing terrorist attacks, but Negm says sarcastically that they forget that the major terrorist attacks in Egypt have been committed by men “without any concern that they would have to wear a niqab to hide under.” 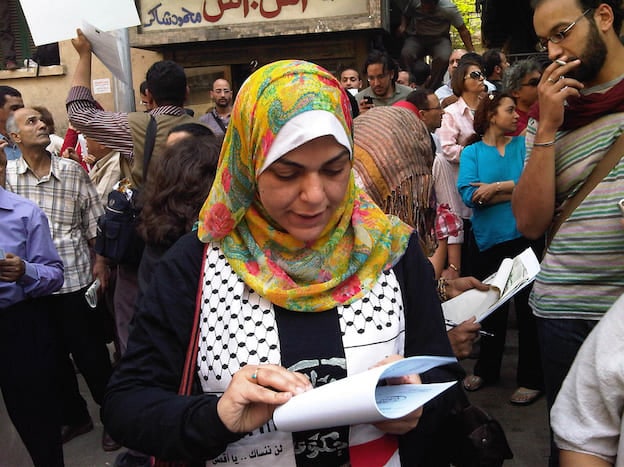 Another elite, those who object to the bill on the grounds of women’s rights and the right of the woman to wear what she wants, also came in for a rebuke from Negm: “Since when was the Egyptian woman free to choose what she wears, her way of life, how she expresses herself and her tone of speech? On a daily basis, the Egyptian woman looks in the mirror when choosing clothing that will protect her from harassment on the street, rather than clothes reflecting her taste and personality. She chooses to speak in a particular tone so people don’t say that she is insolent and crude. She walks on the street like a male soldier so as not to attract attention and get looks. … She has to choose between the holy task of finding a husband and the need to deflect men’s glances. She chooses work that won’t cause the public to talk about her. She has to come and go at times when she won’t be harassed and she even sometimes chooses her life partner out of a desire not to remain single.”

The female “other” is dangerous to society so “don’t speak about women’s freedom and dignity in a country like Egypt,” writes Negm, whose father is one of Egypt’s greatest popular poets, Ahmed Fouad Negm, who sat in jail for years for his critical poetry and whose mother is the prominent author Safinaz Kazem. No Egyptian intellectual, however, has agreed to speak on behalf of Jews and gays. They are “others” who are too dangerous.