Trending
LONDON (AP) — The son of former IAAF president Lamine Diack and two Russian officials were banned from track and field for life on Thursday for engaging in blackmail, bribery and extortion to cover up a Russian doping case.

The sanctions centered on the case of Russian marathoner Liliya Shobukhova, who was allegedly extorted out of hundreds of thousands of dollars to avoid a doping ban before the 2012 London Olympics. 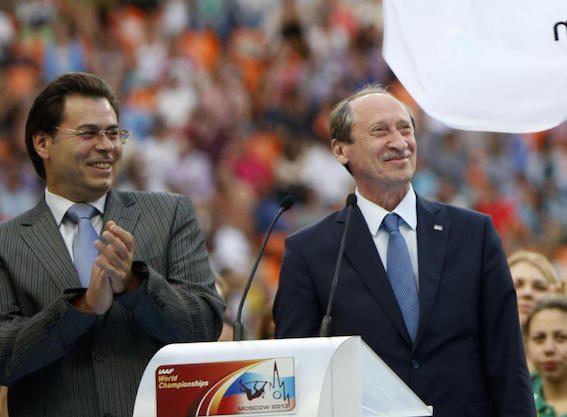 “All three compounded the vice of what they did by conspiring to extort what were in substance bribes from (Shobukhova) by acts of blackmail,” the IAAF panel said. “They acted dishonestly and corruptly and did unprecedented damage to the sport of track and field which, by their actions, they have brought into serious disrepute.”

In addition to the life bans, Papa Massata Diack and Balakhnichev were fined $25,000 each, and Melnikov was fined $15,000.

Dolle received a lighter penalty because “his sins were those of omission, not commission,” the IAAF panel said.

The verdicts can be appealed to the Court of Arbitration for Sport.

The ethics panel said it was also still investigating Lamine Dack’s legal adviser, Habib Cisse, and would open an investigation into Lamine Diack as well.

The elder Diack was taken into custody by French authorities in November on corruption and money-laundering charges, suspected of taking more than 1 million euros ($1.1 million) to blackmail athletes and cover up positive tests.

Dolle and Cisse were also detained and charged with corruption in France.

The IAAF ethics probe followed a report by German broadcaster ARD in December 2014 alleging that Shobukhova — a former winner of the Boston and Chicago Marathons who turned whistleblower — paid 450,000 euros ($520,000) to Russian officials who threatened her with a doping ban before the London Games.

When Shobukhova was eventually banned for two years in 2014, her husband reportedly received a 300,000 euro ($345,000) refund payment linked to Balakhnichev. Then treasurer at the IAAF, he stepped down within days of the program being broadcast.

Balakhnichev called his ban an “unbalanced decision” and claimed it was timed deliberately on Orthodox Christmas.

“It was somewhat politicized, as seen by its being announced on the biggest religious holiday of the Russian Federation, which is Christmas,” he told The Associated Press.

The IAAF commission held a hearing on the case in London from Dec. 16-18. None of the defendants appeared in person. Balakhnichev, Melnikov and Dolle appeared by video link. Papa Massata Diack declined to appear even by video, the IAAF panel said, saying there was “no justification” for his decision.

Shobukhova, who won three straight Chicago Marathons from 2009-2011 and the London Marathon in 2010, was among several Russian athletes who were found by the IAAF in 2011 to have suspicious readings in their blood profiles.

According to the IAAF ethics investigation, Papa Massata Diack and the Russians blackmailed Shobuhkova in return for not suspending her from the London Games. The report detailed three separate payments made by the marathoner as part of the deal.

The IAAF investigation found that 300,000 euros ($325,000) was transferred to Shobukhova in March 2014 from an account in Singapore linked to Papa Massata Diack.

The ethics panel said the money was paid as part of plot by the three men to “obtain the silence'” of Shobukhova. She told the panel the funds were a partial repayment of the money she had paid to avoid a suspension, and were intended to ensure that she would accept the sanction in 2014.

The panel also cited a WADA document from November 2014 suggesting that Russia claimed it had been blackmailed by the IAAF since 2011 to cover up tests for six athletes, including Shobukhova.

The document said a similar cover-up system was in place not only in Russia “but potentially in other countries such as Morocco and Turkey.”

The IAAF panel said Dolle’s failure to take action to prevent Shobukhova from competing in the Olympics was an “inexcusable lack of due care and diligence rather than corruption.”

However, the panel added it was aware of reports that French authorities may have evidence that Dolle did receive money. If so, the panel will reopen the case.

In a statement, the IAAF said it was “angered” that the officials sanctioned by the ethics panel “conspired to extort what were in substance bribes from the athlete by acts of blackmail.”

“The life bans announced today could not send a stronger message that those who attempt to corrupt or subvert the sport of athletics will be brought to justice,” IAAF President Sebastian Coe said.

European Athletics President Svein Arne Hansen said he planned to strip Balakhnichev of his honorary membership in the regional federation.

The ethics sanctions were announced a week before a World Anti-Doping Agency commission, headed by Dick Pound, delivers the second part of a report into allegations of widespread doping in track and field.