South Africa’s last white president and Nobel Peace Prize laureate Frederik Willem de Klerk urges Israelis not to follow the same path as his own country, because that could would lead to the abyss.

Frederik Willem de Klerk, 79, South Africa’s last white president and a Nobel Peace Prize laureate, visited Israel this week. He was a guest at an anti-racism conference organized by the Berl Katznelson Foundation. I met him in Tel Aviv the next day. “I don’t give one-on-one interviews anymore,” he told me. Eventually, he relented, and I can see why. Using polite, carefully crafted words, he sought to tell the Israelis: Don’t follow the same path as my country, South Africa, because that road would lead you into the abyss.

Is Israel an apartheid state?

“I don’t think so,” he said. “But if the two-state solution is not implemented, and if, in such a situation, the Jews have special rights while the Palestinians live as second-class citizens, Israel will become an apartheid state.”

What do you mean?

“The essence of apartheid is racial discrimination,” he said. “We didn’t invent it: All of the colonial powers led such regimes. In 1948, we turned the policy that was already being implemented on the ground into law. That was stage one. In the second stage, John Vorster, the prime minister during the 70s, tried to address the de-colonization process. He gave independence to nine black districts. It was a wish, a fiction – the world refused to recognize it.

“In the third stage, we tried to give both blacks and Indians partial political rights and divide the land. That stage was also unsuccessful: The offered land was divided into enclaves and too small; the blacks didn’t regard independence as a solution. And then came the fourth stage: One state. At that point, it was the only logical solution.”

Did the international boycott and the economic sanctions against South Africa play a part in reaching the agreement?

“The sanctions cost us 1.5 percent of growth per year,” he said. “We could have lasted like that for 10-15 years more.

“It wasn’t the boycott that determined what would happen, but our conscience. The only solution that was morally defendable was to begin negotiations and reach a constitution that completely eradicates the apartheid regime and recognize the different sectors in the population and minorities’ rights.”

De Klerk is not eager to talk about it, but the agreement that was reached is far from perfect. The whites went from being a privileged minority to a minority that is being discriminated against. The government is plagued with corruption; there’s no personal sense of security; there is no law.

What can we learn from your experience?

“As an outsider, it seems to me that the window of opportunity for the two-state solution is about to close. You might miss this chance.”

In the interim period after the end of the apartheid regime, I visited South Africa twice. It seems the young white people are leaving, en mass.

“It’s true,” he said. “Many have left – some 800,000. Half of them left because they wanted to experience the world, and half because they didn’t want to live under a black government. They emigrated to Australia, New Zealand, Canada, Britain.” 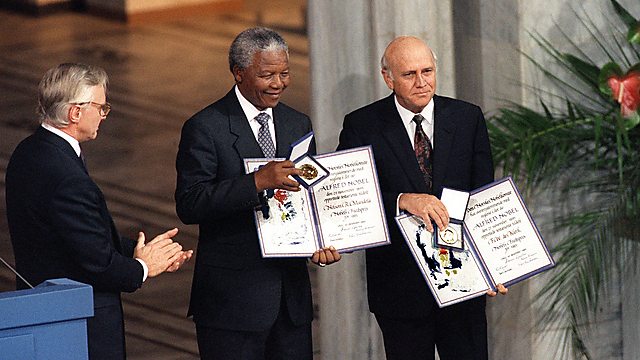 How is it that you of all people, who represented the right wing in a right wing white party, led to the agreement with the African National Congress?

He smiled. “They voted for me because they thought I was the most conservative of all candidates. They were wrong about me.

“A leader’s job is not to follow opinion polls. Leadership requires taking an initiative, a vision, a true aspiration to improve the situation, and the ability to convince your voters that the change in the status quo will benefit them in the long-run. That’s what I did on the white side, and that’s what Mandela did on the black side. We both did it while facing harsh criticism from our camps.

“When I put the agreement to a referendum in 1992, nearly 70 percent of the white population voted in favor. The third that voted against it is angry with me to this very day.”

Can Barghouti, like Mandela, make decisions from prison that no one else dares make on the outside?

“I don’t know anything about the man,” de Klerk said. “The lesson we learned many years ago, before we freed Mandela, was that you have to negotiate with whoever has the support of the majority.”

How much of a role did the international community play in reaching your agreement?

“In our case,” he said, “a very small role. Your situation is different, because the conflict was on the international agenda from the beginning. The world can bridge and help, but the decision is primarily yours.”