The Islamic State (ISIS) and its former masters, now bitter rivals, in Al-Qaeda are excellent haters. And they work very hard to translate that hate into actual violent action against certain groups of people. But they differ slightly in their immediate priorities. Both groups demonize and exalt violence against Jews (as disparate groups like Hizbullah, Hamas and even the supposedly more respectable Fatah also do), but ISIS also prioritizes violence against Shi’a Muslims, whether in the Syrian or Iraqi governments or Shi’a worshippers in places like Kuwait or Saudi Arabia. And Al-Qaeda has often called for prioritizing attacks against the West, especially the U.S., over targeting local religious minorities.

As for targeting Christians, ISIS has made a very public fetish of destroying Christian symbols and sites, uprooting historic communities, and killing Christians as it gained territory in Iraq, Syria and Libya. But the group also did this when it was still publicly a member in good standing of Al-Qaeda (2003-2014). Both groups seem to harbor a particular hatred for the largest single Christian denomination in the Middle East and North Africa, the Coptic Orthodox Church, the “Patriarchate of Alexandria and the See of St. Mark.”

Most of the history of the autochthonous Coptic Church under Islam is not much different than that of other Christian communities under Islamic rule. Communities were both favored and persecuted under that rule, varying according to political and personal circumstances.[1] One can see what one wants to see and find both real human flourishing and tolerance, and discrimination, brutality, and oppression during those 14 centuries.[2]

Given the relatively large number of Copts in Egypt and the rise of Salafi jihadism in the country in the 1970s, it was probably to be expected that these takfirigroups – in many ways precursors to Al-Qaeda – would target Egyptian Christians in addition to government officials. Robbing a Christian-owned shop and killing its owner was at least as laudable as killing a local policeman, and more profitable.

While some clashes were part of the historic fabric of localized sectarian violence in rural Upper Egypt, these new Islamist groups also gave the violence a new scope and justification. The irony is that, of course, Egyptian Christians always had very little influence or power under the succession of military-led governments that ruled the country since 1952. But from the time of President Sadat to this day, Copts were not only to be frequent subjects of Islamist murder and robbery, but of ideologically motivated vilification.[3]

As Gilles Keppel has richly documented, in the discourse of the various Salafi Islamists proliferating in Egypt from the 1970s, Copts were either recalled as the happy and contented dhimmis of legend or scorned as the ungrateful, coddled, and too-powerful “Crusaders” of today.[4]

As the Egyptian government largely crushed the terrorist Al-Gama’a al-Islamiyya in the 1990s, anti-Coptic incitement went international with the rise of Al-Qaeda and its core of veteran Egyptian jihadis mostly drawn from the Egyptian Islamic Jihad organization (EIJ). Both EIJ and Al-Gama’a drew at least some of their key leaders from the older Muslim Brotherhood.[5]

While the term Islamophobia has become extremely fashionable in the past few years, this phenomenon does not seem to have affected the deep desire of many Muslims to enter the Western lands where it supposedly flourishes. The outbreak of open and unashamed violence against religious minorities in the Middle East by Salafi-jihadis, including against Christians, has now accelerated into a flood of desperate people seeking to flee the Middle East. But while this overall anti-Christian violence is always wrong and objectionable, Coptophobia seems special, in that it also happens where there are actually no Coptic communities in existence.

The Islamic State of Iraq, on its way to become the ISIS of today, actually had an Egyptian as its ostensible leader from 2006 to 2010, during a key period of its history.[6] But Abu Ayub Al-Masri was already dead when the Islamic State, under the now infamous Abu Bakr al-Baghdadi, launched an attack in October 2010 against Syriac Catholic worshippers at Baghdad’s Sayedat al-Najat Church. Iraqi Christians had been targeted for years, but this attack included a new twist. Among the claims made by the organization was that the bloody operation, which killed many Iraqi women and children, was in revenge for the Coptic Church’s alleged imprisonment in one of their “monasteries of infidelity and churches of polytheism” of two Egyptian women who supposedly had converted to Islam.[7]

The case of Camilia Shehata and Wafa Constantine, alleged Muslim converts, or battered wives, or merely women with marital problems, whose cases were used by Salafi activists to incite sectarian violence, would appear repeatedly as an excuse for homicide against individuals having no connection with these two women.[8] The Baghdad operation was “in revenge” even though both women are still alive.

The claim of “Copts abusing Muslim women” was sensational and important enough to already have prompted angry video comments by Al-Qaeda leader Al-Zawahiri and one of his key lieutenants, Abu Yahya al-Libi.[9] Such a charge had been a staple of local anti-Coptic pogroms for many years.[10] Now it had gone viral and global as part of the language of the international jihadist movement.

While innocents were killed in Iraq and the Al-Qaeda leadership based in Waziristan called for action, Copts were targeted in a bloody Christmas suicide bomber attack in January 2011 that killed 23 and wounded almost a hundred in Alexandria, Egypt.[11]

As often happened in Egypt, the claim of responsibility was unclear, but the attack came at a time of extreme political turmoil and of anti-Christian agitation, including claims by a prominent Islamist politician, Muhammad Salim Al-Awa, that Copts were storing weapons in churches and monasteries in order to establish a “Coptic State.”[12] The more extreme Al-Zawahiri had made similar claims.[13] Regarded as a thoughtful Islamist leader, Al-Awa would receive 1% of the vote in the 2012 Egyptian presidential elections, and was featured positively in a recent interview on Sunni-Shia solidarity on Hizbullah-controlled Al-Manar TV.[14] Still other allegations were that the Egyptian Government had manipulated Islamist terrorists to carry out the operation.[15]

The language used against Copts, and the specious justification for violence, were similar to that used against other ethnic and religious minorities throughout history, involving wild-eyed allegations of disloyalty, violence, sexual impropriety, arrogance, and conspiracy.[16] And as happened in so many pogroms and massacres in the past, including in the Middle East, the offending minority was to be “punished” collectively.[17]

Violence against Copts would continue during Egypt’s turbulent transition, and spike at the time of the overthrow of the government of Egyptian President Muhammad Morsi in July 2013, with dozens of churches torched and generalized violence throughout the country.[18] The Islamist discourse blamed the Coptic community for much of the ongoing turmoil and for the fall of the Muslim Brotherhood government.[19]

Al-Gama’a al-Islamiyya leader Assem Abdel Maged was only one Islamist leader castigating the Egyptian Army for siding with “religious, political, and social minorities.”[20] The emphasis is rather significant. Rather than suggesting a frightened and marginalized minority throwing in its lot with the military, it is the military that throws in with the religious minority.

As extreme as the sectarian violence and language in Egypt has become, it is certainly part of a broader spectrum of local conditions and tensions existing in that country for years, albeit exacerbated by political struggle and the rise of Islamists over the past 50 years. More unusual is how Coptophobia, as with the 2010 Baghdad church attack, has been internalized among non-Egyptians.

Having used Copts as a prop in 2010, the Islamic State brought them center stage in February 2015. The 20 Egyptian Coptic Christians and one Ghanaian Christian beheaded by the Libyan branch of ISIS in an English-language (with Arabic subtitles) video sent multiple messages. 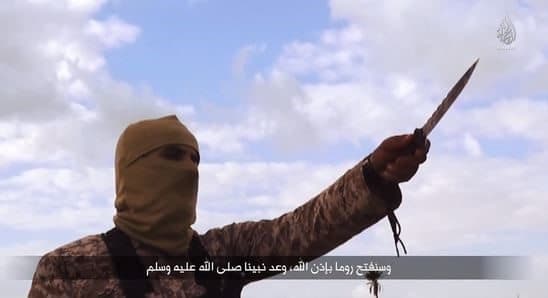 ISIS video: “We will conquer Rome, by permission of Allah, as promised by our Prophet”

The message had an obvious Egyptian context: These were “followers of the hostile Egyptian Church,” and the killings were “in revenge for Camelia and her sisters.” But the murder of these migrant laborers is also nestled into a larger context of an ISIS war against Christianity.[21] It is a “Message Signed with Blood to the Nation of the Cross.”[22]

The English-speaking leader of the massacre boasts that “we will conquer Rome,” and that the blood of the infidels is mixed with seawater just as that of Osama bin Ladin was. He also refers to the 2014 beheadings of Westerners in northern Syria, near Dabiq, the Armageddon of Islamic prophecy.[23] And, in a further eschatological reference, he mentions the foretold Second Coming of Jesus Christ (in Muslim end-times tradition) and his “breaking the cross, killing the swine, and abolishing jizya (humiliating poll tax traditionally paid by non-Muslims under Islamic rule). 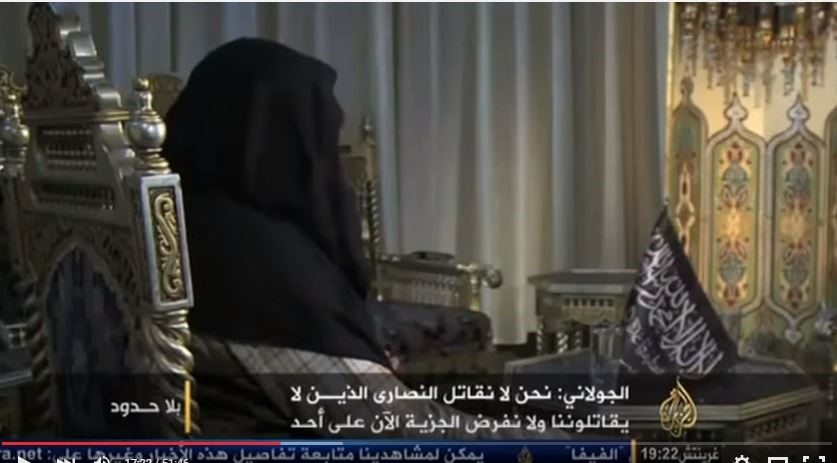 While ISIS’s sectarian discourse is often derided even by many Muslims as extreme, a different attempt at whitewashing jihadis featured a jibe against Coptic Christians. Al-Jazeera’s May 2015 interview with Abu Muhammad Al-Julani, the Syrian head of ISIS’s bitter rival Jabhat Al-Nusra, Al-Qaeda’s branch in Syria, portrayed the organization uncritically.[24] Correspondent Ahmed Mansour, himself an Egyptian Islamist, asked Al-Julani about the organization’s treatment of religious minorities, including Christians. Al-Julani answered that his organization would not blame Syria’s Christians “for what the Americans or the Copts have done.”[25] What a remarkable statement, equating some sort of community-wide guilt to an Egyptian religious minority on a par with the alleged misdeeds of the world’s superpower! 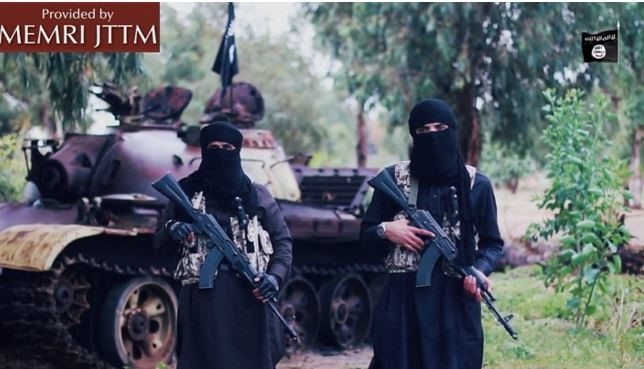 ISIS Tripoli has continued to regionalize anti-Coptic violence in a 13 minute video released in February 2016.[26] The two Egyptian ISIS members called on their countrymen to abandon other Islamist groups and protest efforts and join the Islamic State. They described Egyptian President Abdel Fattah Al-Sisi, who has made several high-profile efforts to promote religious tolerance and reach out to Copts,[27] as “the ape, pig, slave of the Cross and guardian of the Jews.”

Against a backdrop of a photograph of Al-Sisi with Coptic Pope-Patriarch Tawadros II, the speaker says: “Fight and kill them, from their Great Priest (Tawadros II) to the most pathetic one.” A second speaker calls for Egyptians to “terrorize the Jews and burn the slaves of the Cross.” And while there hasn’t been a second beheading video of Coptic Christians to date (the second video was of Ethiopian Christians[28]), at least seven more Egyptian Christians are missing in Libya.[29]

With the modern poisonous discourse about Coptic Christians closing in on half a century, Islamist Coptophobia is clearly here to stay. The deadly actions of the Islamic State and the toxic rhetoric of contemporary politicians like Abdel Maged and Al-Awa, coupled with the traditional, localized prejudice of past centuries, have contributed to creating a deadly environment for Egyptian Christians. And what was once an Egyptian story is now a regional one, as Islamists outside the country spread the message on social media. The fact that some apologists for Egyptian Islamism seek to talk about individual “unwise and immoral” Coptic leaders or activists does not detract from the deep, naked bigotry at play here directed against a threatened community of millions of innocent people.[30]

[26] “ISIS In Libya To Egyptians: Rise Up Against Al-Sisi, Burn The Slaves Of The Cross, Terrorize The Jews”, MEMRI Jihad & Terrorism Threat Monitor Project, February 8, 2016.