Despite having no organic ties, he managed to convince everyone in the world -except Russia- that he was “Putin’s Brain”. The fame of the Russian philosopher Alexander Dugin in the world mainstream media, after losing his daughter in a bomb attack, may  now bring him closer to Putin in real terms this time. Discussing the assassination of Darya Dugina, Russian analysts begin to put forward some unusual theories.

“The genocide of these idiots (Ukrainians) is imminent and inevitable. They inherit a “bastard” race that came out of sewer manholes. […] We must kill, kill and kill Ukrainians! There is nothing more to say. I say this as a professor. This is my opinion,”

These spittle-flecked calls are from an on-record interview in 2014, where an irridentist Professor Alexander Dugin addresses his students at Moscow University- which at the end costed him his job in the institution following pressure by the Kremlin.

– the most famous remark regarding the Ukrainian people made by Alexander Dugin back in 2014. pic.twitter.com/Z8GNnwZ2iq

A theorist, who obviously seems to be not tested by the cold face of death while saying these words, witnessed his daughter destroyed in a car, exactly 8 years later, during another Ukrainian war.

A hit video, where Dugin watches burning remnants of his bombed car near Moscow, circulated in media for all week:

Looks like there was an assassination attempted on Alexander Dugin that killed his daughter, fair to say things will escalate a lot from here!

In that car was Darya Dugina, a young commentator who was famous with her enthusiastic nationalist remarks and Pro-Ukranian addresses to many Russian television channels, died in this attack which took place on the eve of Ukraine’s Independence Day. But everyone soon after focused on the man with his hands on his head.

About twenty years ago, he was only an uncomprimised anti-Communist writer, having pretentious and colorful books that didn’t attract considerable attention in bookshops, and a website mentioning esoteric/mystical weird traditions that didn’t have many visitors. Now, even in the New York Times, the title “Putin’s philosopher” appears next to his name. Although this is not quite true, the “fake it till you make it” campaign has now finally been accomplished. But who was he actually?

A career built back between two Russian Wars 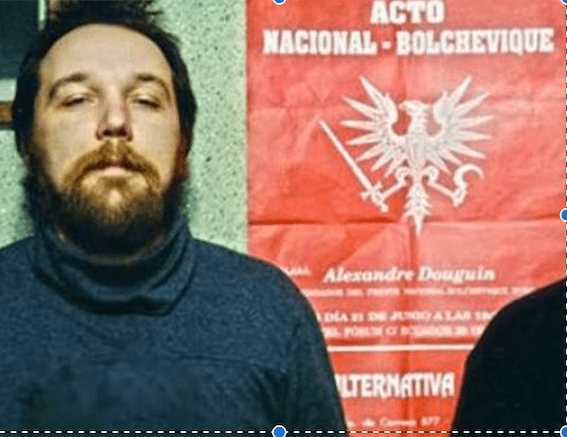 Son of Geliy Dugin, who served as a colonel-general in Soviet military intelligence, Alexander Dugin was an unpopular aggressive irredentist/racist writer in the 90s, promoting “Eurasianism” where he calls upon Russia, which is yet to be a superpower following the collapse of Soviet Union, to achieve impossible things to imagine.

In “Foundations of Geopolitics”, a book he wrote in 1997, Dugin asserted that US-led Atlanticism is destined to lose influence to “Eurasia”, a geographical term he coined for integrating Europe and Asia, where Russia’s power should expand through annexations and critical alliances.

Overall, he advocated a sophisticated program of subversion, destabilization, and disinformation campaign spearheaded by the Russian special services. Here are some quotations just to give an idea:

“The operations (for subversion) should be assisted by a tough, hard-headed utilization of Russia’s gas, oil, and natural resources to bully and pressure other countries (…) The maximum task [of the future]is the ‘Finlandization’ of all of Europe”.

According to many, the number of people who read and got impressed by this book in the Russian army was not small. But still, Dugin’s fame spread more outside Russia than it did inside Russia — Especially in Turkey, the country he called as “America’s agent in the region” in the same book.

Conning the Turks as a “Rasputin” 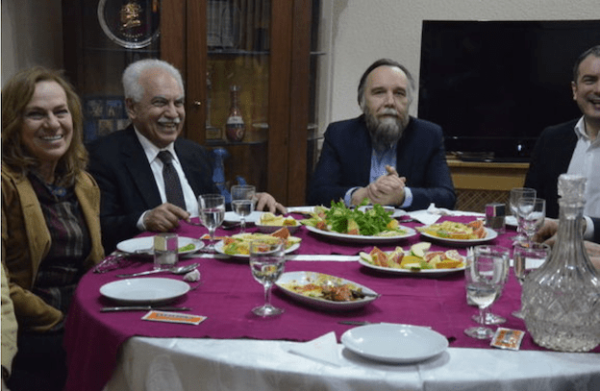 Dugin formed close ties with former leftist neo-nationalist/Pro-Russian groups in Turkey in late 2000s, been invited as speaker in numerous conferences. Turkish media, which within those years has gradually ended being dominated by anti-Westernism and Erdoganism, began to interview the imposing Rasputin-looking man who introduced himself to Turkish audience as “Putin’s mentor and chief adviser”.

Yet his connections in Turkey were not limited to Pro-Eurasian/pro-Russian Turkish politicians/journalists. Dugin also constituted close relations with certain Islamic groups. Middle East Transparent previously published a photo, where Dugin visits a muslim scholar’s grave, along with prominent names close to the Islamist IBDA-C group.

On July 14, 2016, just a day before the infamous failed coup attempt in Turkey, in an interview with a pro-Russian newspaper, Dugin implicitly expressed his desire for Erdogan to assume the Sunni leadership in the Islamic world, and drew a model for Turkey as “a Sunni Iran, allied with Russia and isolated from the West.”

Somehow following the coup, in interviews, Dugin claimed that he had actually came to the country to warn some bureaucrats in Turkey, and that Russia had informed Erdogan of the coup attempt beforehand. But official spokespersons on the Russian and Turkish sides have repeatedly denied these remarks. 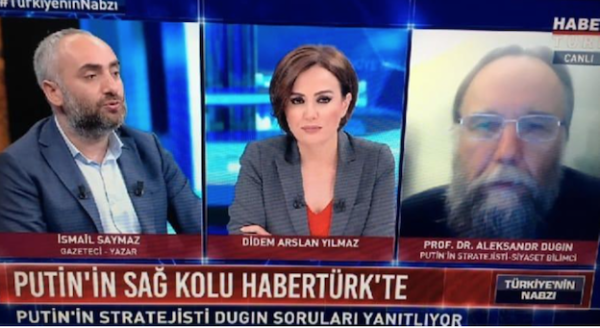 Still, it didn’t change the Turkish affection for him. Because lately, Mr. Dugin went further to accuse dozens of academics, businessmen and activists who were arrested for allegedly perpetrating the failed coup attempt on July 15th of spying for CIA and to claim that “US intelligence spent over 2 billion dollars to make the coup happen.”

These accusations somehow reputed him as a representative of the Russian state and in an attractive role as “a white foreigner who confirms anti-Western conspiracy theories”, enabling him to meet with the then-Prime Minister of Turkey, Binali Yıldırım and being invited to AKP congress in 2016. 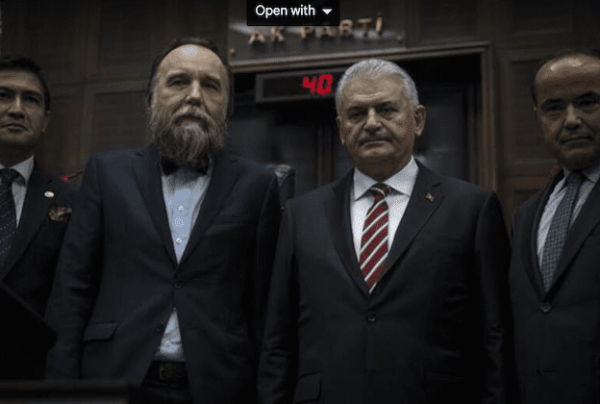 And he wasn’t the only one. Numerous names, who had no official connection with Russia, literally conned Turkish media and audience during late 2010s, by introducing themselves as Russian officials at that time.

It’s Dugin himself who says he doesn’t have a close personal relationship with Putin. Here is an excerpt from the interview he gave to the Italian newspaper Foglio:

“Difficult to answer, I’m not so close to the President, as some believe, but i think a lot of ideas that I expressed in philosophy and in politics have a considerable impact on Putin. But there is no need to exaggerate”

But after the assassination, CNN International, The New York Times, Euronews, 60 Minutes, Washington Post and many mainstream news outlets put the titles “Putin’s Brain”, “Putin’s Philosopher”, next to Dugin’s name, a priceless honoring and consolation for 60-year-old writer.

Imagine someone whose name is adorned with the titles such as “Modern Rasputin to Putin” but not even escorted by any other state vehicle or enjoying any security protocol. 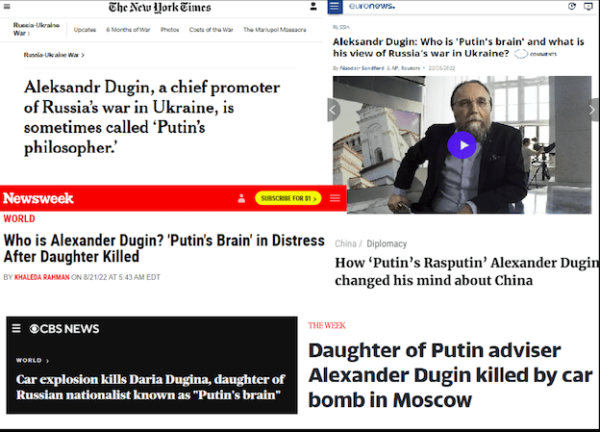 However, all of these does not mean that he is a completely ineffective figure around Russian circles. Although not quite with Putin, Dugin has strong ties with and is protected by a prominent billionaire in Russia, who is also in the international sanction lists: Konstantin Malafeev.

The owner of Tsargrad TV, where Dugin is a regular commentator and his daughter Darya Dugina is an occasional guest, Malafeev had this network set up by a former Fox News employee, Jack Hannick, and featured an American far-right pundit, Alex Jones on . Dugin did not lead but subscribed to a network outreaching to European neo-nationalists and American far-right funded by sanctioned Russian billionaires.

Many theories of Darya Dugina assasination 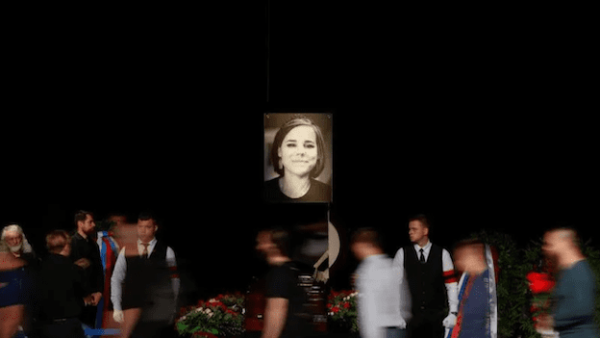 There are some facts for starters:

Within a week, Russia announced the arrest of two Ukrainian agents involved in the bombing that killed Darya Dugina. But since the topic is Dugin, countless theories have been floating around for days.

Russian intelligence, F.S.B, announced just two days after the attack, that a Ukrainian Azov officer named Natalia Vovk faked her license plate and identity card, entered Russia with her 12-year-old daughter and settled in the same apartment as Darya Dugina, and then fled to Estonia after the bomb attack. This looks dubious and unconvincing for many experts, saying it’s one of the fastest political cases the FSB has “solved”.

First of all, one needs to take Dugin quite too seriously to carry out such an attempt. And according to Masha Gessen of The New Yorker, Ukrainian chain of command certainly does not. Gessen, on her article discussing Dugin’s position in Russia, resorts to the approach of Oleksiy Arestovych, Zelensky’s presidential adviser who had previously been in the same anti-Western circles as Dugin. Gessen wrote that he was one of the names who knew that Dugin was “not as important as he desired others to think he is” and does not have any organic-direct ties to Kremlin.

Ilya Ponomarev, a former Russian opposition politician who has been living in Ukraine for the past seven years, has taken partial credit from the attack and claimed that an organization called the “National Republican Army” carried out the murder, an unknown group by public till being referred by Ponmarev. Still, Dugina or Dugin himself seems to be a target that would ignite an outrage only to a limited extent in Russia to avenge atrocities committed by Putin, since Dugin was not the most prominent Russian propagandist, relegated behind the actual faces of Russian aggression on TVs: Skabeyeva, Solovyov, Tolstoy, Kiselyov, Simonyan.

On the funeral, the Liberal-Democratic Party leader tried to enthuse the attendees by shouting Nazi-like slogan: “One country, one President, one victory”

Dugin’s speech was no less interesting either. While crying how his daughter Darya “sacrificed” herself, and that even as a child, her first words were “Russia, our mighty state”, reminding the audience that Alexander Dugin was still an esoteric-sacrifical traditionalist.

Such a world-shaking incident brought many conspiracy theories alongside. Sergej Sumlenny, A Berlin-based researcher for Boel Stiftung on Eastern Europe, and Kamil Galeev of Wilson Center, who both almost ruled Twitter with numerous ground-breaking threads while the whole world is following Russian aggression since the invasion, pointed to a FSB false-flag operation possibility and went further even to claim that Dugin was among who perpetrated the bomb attack:

“ There would be two motives for this: 1) Intensifying the war via playing the card ‘Ukrainians are killing us in Moscow!’ 2) Exit strategy sending signals to the hawks ‘shut up’. I know, that these two motives oppose each other. This should not surprise you. There can be different ideas within the FSB leadership, and different orders can be given. One can imagine, that some groups want to intensify the war, and others want to look for exit strategies”