The  campaign of Bernie Sanders to become the Presidential candidate for the Democratic Party, was an unprecedented phenomenon in American political life. The son of a Jewish immigrant from Poland, the Independent Senator from Vermont has not been bound to any party even from the start of his political career when he was elected Mayor of Burlington, Vermont in the early eighties. Known to be an honest man who does not give up on his

principles, his integrity has carried him throughout his political journey from Mayor to his election to the U.S. House of Representatives in 1991, to his subsequent election as a U.S. Senator from Vermont in 2007. He usually describes himself as a Scandinavian-Style democratic socialist and did not join the Democratic Party until the eve of his candidacy for the US presidency.

He led a historic campaign throughout 15 months of the Democratic Party primaries, garnering more than 13 million votes, mostly from young people and from people in middle and lower classes. Sanders won in 23 states over his strong rival, Hillary Clinton, recruiting hundreds of thousands of volunteers to work on the campaign, which relied completely on small contributions from millions of mostly low-income people. His opposition relied, as most every candidate has ever done, on huge financing from a few rich people, big companies and financial institutions.

Remarkably, he achieved his excellent results during the campaign even though his campaign strongly focused on such issues as the disparity in income and wealth in the United States and the dangers that huge financial monopolies pose in putting the country’s economy on the brink of collapse. He promised to address issues of importance to a wider scope of US voters, issues such  as free health care for all, the reduction of prescription drug prices and pharmaceutical monopolies. He argued in favor of free education at public colleges and universities, an expansion of Social Security benefits and beneficiaries, an increase in the minimum wage from $8 to $ 15 as well as insisting that all workers get mandatory paid vacations, paid holidays and family leave for both mothers and fathers.  He is outspoken about the protection of women’s rights, including the right to abortion and equal pay and about the expansion of rights for Native Americans. And, quite unlike a certain orange-headed Presidential candidate, he favors  an overhaul of immigration laws to include open ways to naturalization for at least 11 million undocumented immigrants currently in the United States. He wants reform of many criminal laws, the abolition of the death penalty, the abolition of prisons and detention centers run by private companies for profit, and the closure of the Guantanamo Bay detention center. He would enact laws restricting the access of individuals to weapons, and supports the closure of loopholes in the laws that allow  big monopolies to escape paying taxes and smuggle money to external havens. Sanders would push to change current laws that allow the rich to finance political campaigns which often results in corruption. He has repeated in his speeches that the richest 1% of Americans has spoiled American democracy by  pumping their money into election campaigns.

On the global front, Sanders supports major investment to face  global climate change with meaningful action using taxes, such as a carbon tax. His foreign policy would uphold the importance of diplomacy over war, and to promote an end to the historic conflict in the Middle East, he supports a negotiated solution of two states, Palestine and Israel.

As shown by Sanders’ campaign, large segments of the American people support his bold progressive agenda that fights for economic, ethnic, criminal, environmental and social justice and for a government that works for all its citizens, not just for the benefit of the financiers of the candidates’ campaigns. Sanders did not originally think his election campaign could actually win the presidency, but he considered that the campaign might inspire millions to rescue their country from the billionaires’ lair. Sanders’ failure, therefore, to win the Democratic nomination does not mean that the “movement” sometimes dubbed a “Revolution” is over. He believes, on the contrary, that the movement has only just  begun. 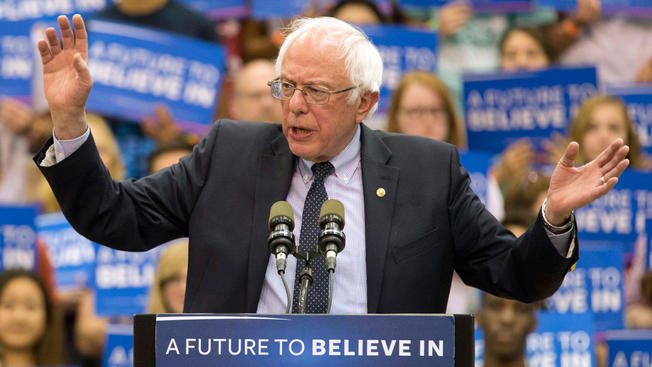 Sanders went to the Democratic Party’s convention, held in Philadelphia in late July, carrying his program supported by about 1900 delegates of the conference, and echoing the millions of voters who voted for his program. He demanded the Convention adopt many of his ideas as part of the Democratic platform thereby binding Hillary Clinton to those principles  in the presidential campaign. There was no way, of course, Sanders could support Republican party candidate Trump, considering that Trump’s success would profoundly sabotage  Sanders’ movement. Clinton’s success for him would make it at least possible to achieve some of his goals. While Sanders did not exactly achieve a great historical turning point at the Convention, his plans for working families and the expansion of health care covered by the government some of his plans for working families were adopted by the platform committee.

Looking toward the future,  Sanders will not accept less than the full adoption of his program, which would be the biggest change in the history of the Democratic Party, not to mention the country. Such a move towards the left would be the most advanced in history, but the outlook for such is not good, especially in light of  the influence of the right within the party leadership and indeed the country as a whole.

Sanders will again take his movement to the grassroots that supported him in his election campaign, releasing political and cultural organizations to work for the full program. He will support candidates running for Federal, State, and local office levels, from members of Congress to school managers, who will embrace the program. Where Democrats fail to support him, he will endorse progressives, independents, liberals or anyone who wants to adopt his program. The movement  may turn to a new party if unable to establish its presence in the traditional American political institutions, and it will continue to enlist his grassroots campaigners.

If Sanders succeeded in launching his movement, it would be a movement of progressive liberal democracy unusual in the broader social history of America. Sanders is currently writing a book entitled “Our Revolution: A Future We Can Believe” to further clarify his election campaign which is at the gates of switching to a political movement heralding  a fundamental change in American policy .

Is he going to succeed? The exciting answer will be unfolding soon!