Trending
You are at:Home»Categories»Features»Any hope for Lebanon’s popular revolt?
By khatoun Haidar on 23 October 2019 Features

All over Lebanon people remain in the streets protesting, chanting, singing, dancing,  even organizing live concert shows! It does not look as if it will calm down soon.

For the first time, all regions in Lebanon are witnessing the same protest, at the same time.

For the first time, all sects are equally participating. One could even say that all political parties’ members are in the streets dissenting with their own leadership. We even hear protesters trying to defend their historic leaders but then saying, ‘all of them’ means all of them, a slogan aimed to say that all the political class is responsible and should be changed. The army and the security forces are protecting the protest.

Indeed, an unheard of phenomenon in Lebanon, and quite rare worldwide. The numbers are impressive. Almost a third of the population is in the streets. Virtually unbelievable. Can you imagine protests of about 25 million in Germany? Or 21 million in England?

What can happen? and what is the solution, or can constitute a victory for the protest?

If the country and economy are at a standstill for long, the Lebanese Pound may collapse and whether a new government is formed or not, nobody can save the economy when the tumble starts. Nobody knows what will happen then. Surely not a victory for the protest movement.

The protestors demands are, if grouped many, but can be summarized by: put an end to corruption and nepotism, hold the responsible accountable, and return the stolen moneys. Valid demand, but who will do it, what is practically the process? A resignation of the Cabinet will not change anything as it is the same political parties in Parliament that will nominate a new Prime Minister. All agree that the main problem is not Saad Hariri himself.

Another resounding demand is resignation of the President, the Prime Minister, and the Speaker. Impossible demand, there is no process in law and if it happens, then who rules the country and form a new authority that can herald the demands? Some are calling out of despair for military rule. Luckily, this is highly improbable in Lebanon where there is no tradition or culture of militarism.

The people dominating the parliament today which is coalition of Hezbollah, Aoun, and Amal will try not to go for it. Under the street pressure, they might accept hoping to manipulate the street once again through using sectarian populism.

In my opinion, this is the only solution.

If the Cabinet resigns now, then the Hezbollah, Aoun, and Amal will nominate a Cabinet that is even more their own. Freedoms and foreign policy will fall totally under their grasp, and they will crush, Syria style, any future protest.

Better aim for the people to take their destiny in hand and call for early elections. If they fail to dethrone the actual sectarian lords, then it is their responsibility.

Any hope for Lebanon’s popular revolt? 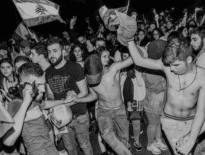 Headlines Protests in Lebanon Are Entering Their Sixth Day. … 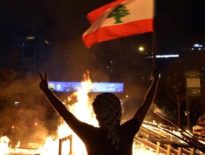 Features Anger in Lebanon, to where?
0
wpDiscuz
We use cookies to ensure that we give you the best experience on our website. If you continue to use this site we will assume that you are happy with it.Ok