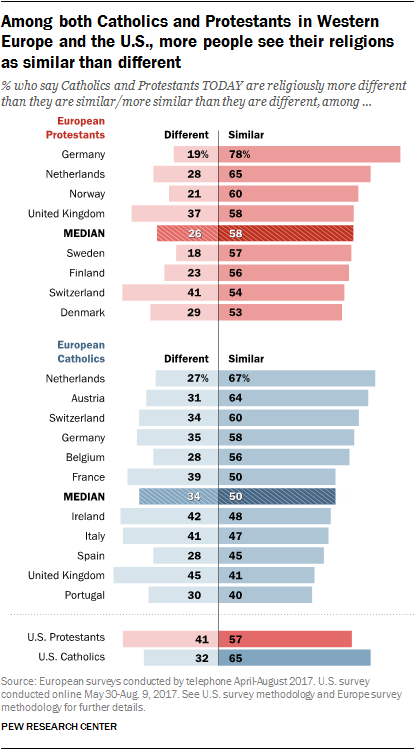 As Protestants prepare to mark the 500th anniversary of the Reformation, new Pew Research Center surveys show that in both Western Europe and the United States, the theological differences that split Western Christianity in the 1500s have diminished to a degree that might have shocked Christians in past centuries. Across Europe and the U.S., the prevailing view is that Protestants and Catholics today are more similar religiously than they are different. And while the Reformation led to more than a century of devastating wars and persecution in Europe, both Protestants and Catholics across the continent now overwhelmingly express willingness to accept each other as neighbors and even as family members.

Although Martin Luther and other Protestant reformers in the 16th century held that eternal salvation is attained solely through faith (a belief known in Latin as sola fide), the surveys show that many Protestants today say instead that eternal salvation is attained through a combination of faith and good works – which is the traditional Catholic position. Indeed, in most of the Western European countries surveyed, Protestants who believe that salvation depends on both faith and works outnumber those who say salvation comes through faith alone.

These are among the key findings of two separate Pew Research Center surveys – one in Western Europe and one in the United States – conducted in recent months. In Western Europe, the Center conducted telephone surveys from April 11 to Aug. 2, 2017, among 24,599 people across 15 countries. In the U.S., the survey was conducted online from May 30 to Aug. 9, 2017, among 5,198 panelists on Pew Research Center’s American Trends Panel (although all of the questions analyzed in the survey were asked of only half the sample).

There are common threads between the two surveys – both included questions to gauge how Protestants and Catholics view each other, and both asked respondents about their views on salvation. However, the results of the two surveys are presented separately because they were conducted using different modes (the European surveys were administered by interviewers via telephone, and the U.S. survey was self-administered online) and because they included some different questions.

Among the key findings in “U.S. Protestants Are Not Defined by Reformation-Era Controversies 500 Years Later” are:

Some of the key findings presented in “Five Centuries After Reformation, Catholic-Protestant Divide in Western Europe Has Faded” include: