The decisions of the Grand Sanhedrin, if adopted by today’s Muslim bodies (replacing « Israelites » by « Muslims ») would usher the end of Islamic fundamentalism

‏The main body of the following article was published by Middle East Transparent on April‪ 2007. The migration of thousands of Europeans and Americans to join the so-called Islamic State in Syria and Iraq makes the Grand Sanhedrin philosophy even more pertinent nowadays. ‬

‏ Politicians‪,‬ both in the Old Continent and in the United States‪,‬ lack the authority and vision of the French emperor. Yet if the imperial era is long over, we now dispose of alternatives provided by modern education and by modern telecommunications.

‏ A solution ‪(‬or‪,‬ rather‪,‬ many solutions‪)‬ should be devised to bridge what looks‪,‬ sometimes‪,‬ as a chasm between Western values and norms on the one hand and Salafi Islam ‪(‬or even Islam as such‪).‬ This has become u‪rgent as ‬Muslim populations in Europe and in the United States represent a ‪”‬problem‪”‬ of a different magnitude compared to the Jews of the French Empire‪.‬ Note that Jewish populations in Bonaparte‪’s Europe were marginal from a demographic point of view and authorities never faced a “jewish terrorism” problem.‬

‏Not so in the case of modern European (and American) Islam. A recent PEW study concludes that European muslims would represent 10 percent of Europe’s population in the near future and that some european countries (Holland, for example) might lose their christian majority status in a number of years. As for the terrorism problem, one could commend Mrs. Obama and Hollande (and Pope Francis) for their “politeness” (or “political correctness”) when declaring that “Islam has nothing to do with terrorism” but, in reality, we are now facing an “islamic terrorism” problem (not to imply that muslims are terrorists, of course‪.)‬

‏Emperor or not, modern Islam still needs the Reformation accomplished, in different ways, by both Christianity and Judaism. European (and American) muslims, as well as muslims in Islamic countries, still have to define their relations to “the other”, that is to the non-muslim. Also, to accept the equality principle between man and woman. And, most pertinent, to unconditionally accept the right to freedom of thought, conscience and religion (including “blasphemy”)‪.‬ ‪ ‬ 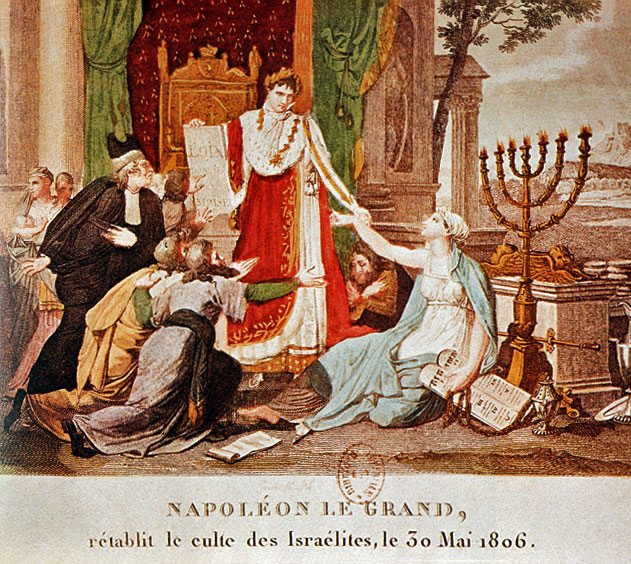 as an example for reforming Europe’s (and other) Islam?

Last week, French Jews celebrated the Grand Sanhedrin convoked by Napoleon Bonaparte in 1807. The Emperor submitted to a gathering of 72 rabbis and Jewish notables, both “liberal” and “traditionalist” (“salafi”, in modern terms), 12 questions whose positive answers amounted to a reformation of Judaism in Napoleon’s empire and to a social and cultural revolution for the Jews of France in particular.

In an article titled “paving the way for a Muslim parallel society”, Last week’s Der Spiegel predicted that “a recent ruling by a German judge citing the Koran underscores the dilemma the country faces in reconciling Western values with a growing immigrant population. A disturbing number of rulings are helping to create a parallel Muslim world in Germany..”. In other words, a specter of a Cold Civil War is haunting not only in Germany but all of Europe.

Der spiegel’s alarmist statement followed on a decision by a German (female) judge that “the exercise of the right to castigate does not fulfill the hardship criteria as defined by paragraph 1565 (of the German Federal Law).” The judge had decided that a woman was not justified in asking for speedy divorce from a violent husband as both she and her husband wore “Moroccans”, citing a passage in the Koran that some have interpreted to mean that a husband can beat his wife!

The awareness that there is a “problem with Islam” is increasing in Europe and elsewhere. And, not only in the public opinion and among politicians and intellectuals. The Catholic Church is witnessing a rise in the traditionalist current at both grass root level (in seminaries, for instance) and at the top. 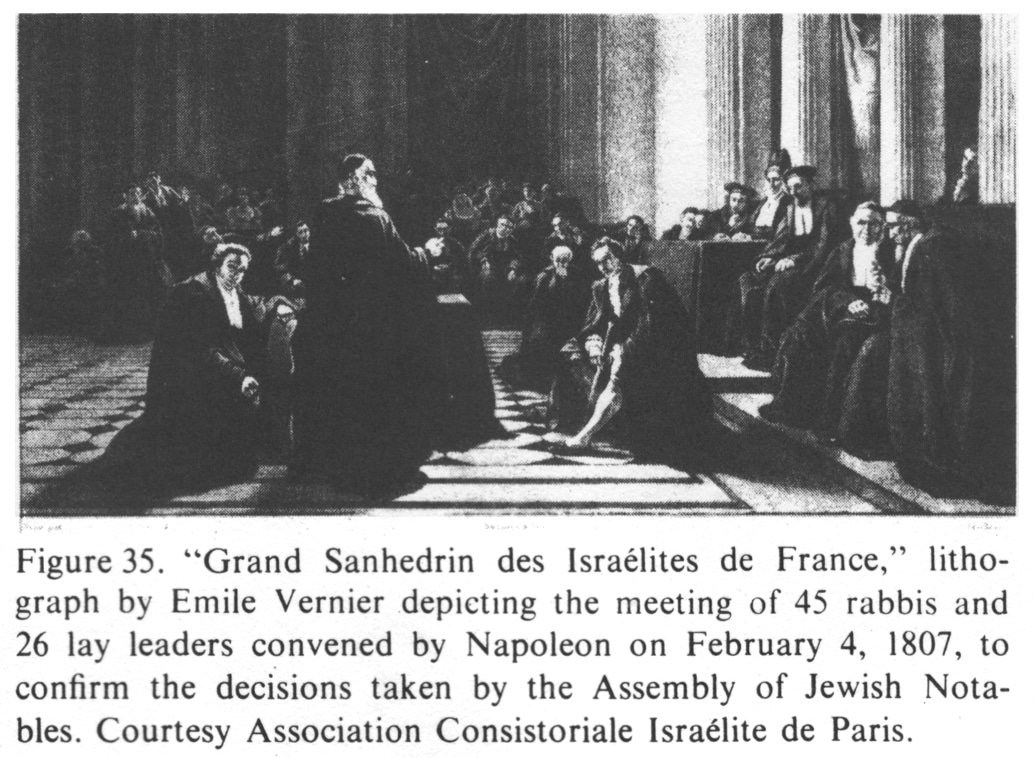 A problem with Islam there is. It is similar in many aspects to Napoleon’s problem with French Jews. Napoleon had discovered that the liberation of Europe’s Jews from their ancient Ghettos and declaring that all citizens were equal was not enough. Judaism, itself, had to undergo the cultural and religious reformation required to meet modernity. Noting the amazing number of brilliant Jewish professionals in modern France, whether in medicine, law, finance, the media, one should remember that until 1807 and for some time later: “it remained to convince the almost illiterate (Jewish) masses of the importance of scientific knowledge because centuries of marginalization had created in their midst the deeply rooted idea that all profane sciences were dangerous for their faith, or the integrity of their religion. Any sciences that did not belong to their religious texts were considered as harmful: grammar, mathematics and history were still considered “suspect” disciplines”!

“The schools, to which they sent their children, before 1789, were under the influence of such prejudices… They were organized in accordance with a carelessness that belonged to another age and managed by ignorant people who taught children Yiddish, some rudiments of Hebrew and the Talmud. “A real and profound pedagogical effort was required to convince families to send their children to public schools and to explain that profane was not a sin…”.(1)

Islam, undoubtedly, is in urgent need of a reformation similar to the reforms enacted by the 1807 Grand Sanhedrin. Though some differences are important. While some Saudi Ulemas would consider the “profane” as “sin”, it is a fact that Muslim immigrants to Europe do send their children to public schools and are immersed in Europe’s modernity. Moreover, and paradoxically, most immigrants come from countries with a prevalent Sufi (thus, more tolerant) organization of Islam, including North African countries. The fact that most immigrants do not come from countries known for their Islamic rigor sheds a light on a particular aspect of the “problem with Islam” in Europe. For, it could be argued that we are witnessing a “transformation” of the traditional Islam carried over by generations of Muslim immigrants into a “Brotherhood-Salafi”, that is a “new” type of Islam, under the assault of organized predicators (belonging mostly to the Brotherhood) and of satellite TVs. The “dish revolution” has reached both North Africa’s traditionally Sufi-organized countries and Europe’s immigrants who come from the same countries as well as Turkey and few other countries. The Islam being vehicled by Arab Satellite TVs is both a Brotherhood Islam (al-Jazeera) and Wahhabi Islam (“Iqra”, among other channels). Its impact is devastating on populations whose knowledge of Islam was, mostly, superficial at best.

Modern Europe most probably could not convoke something similar to the Jewish Grand Sanhedrin, which Napoleon’s genius had revived after 2000 years of abandon. Other means would have to be sought and invented. The “media effect” would have to be used to help “Islam” move in the direction of a profound “reconciliation” with modernity. Such a task would not be an “imperialist ploy” to subvert Islam. The arduous job of reforming Islam did start in the 19th century by such Imams as the Mufti of Egypt, the famous Mohamed Abdo. It is being continued today by many Muslim reformers, including Gamal Banna, Judge Saiid el Ashmawy and many others in Egypt and elsewhere.

Yet, Napoleon’s genius could still be valid in today’s Europe. Modern Islam, still, has to answer most of the 12 (or 13) questions submitted by the Emperor to the Jews of the Empire. “1-Is it lawful for Jews to have more than one wife?; .. 3- May a Jewess marry a Christian, or may a Jew marry a Christian woman?; 4- In the eyes of Jews, are Frenchmen not of Jewish religion considered as brethren or as strangers?; 5- What conduct does Jewish law prescribe toward Frenchmen not of Jewish religion?; 6- Do Jews born in France and treated by the Law as French citizens, acknowledge France as their country? Are they bound to defend it? Are they bound to obey the Laws and follow the directions of the Civil Code?;”.

The decisions of the Grand Sanhedrin, formulated in nine articles and drawn up in French and Hebrew were as follows: “polygamy had been authorized but.. should cease to be .. in the West; that Jews, under Moses Law, considered that only Jews were their brothers… the Sanhedrin has decided that all men are bothers, irrespective of their religion, as long as they were not idolatrous and if Israelites, living among them, enjoyed the same rights which they themselves enjoyed; having established the fraternity between all men, Israelites had the obligation to defend the land in which they lived (even if the Law of Moses had only mentioned the duty to defend the Temple of Jerusalem); marriages between Jews and Christians are not anathema but represent a necessity to be encouraged..; a duty to hold property, etc.; and that Judaism does not forbid any kind of handicraft or occupation;…

Later decrees by the French state required Jews to have proper names- instead of a biblical name followed by “bar or “ben” and the father’s name tradition- and to give proper names to “women” who, until then, had had no names at all. But it should be underlined that the answers of the “Israelites” were not brought about by mere coercion. The Imperial power was met by Jewish “liberal” reformers who, sometimes, were tainted as non-Jewish by 19th century Jewish “salafis”!

The decisions of the Grand Sanhedrin, if adopted by today’s Muslim bodies (replacing «Israelites» by « Muslims ») would usher the end of Islamic fundamentalism.

The task looks arduous in today’s Europe. Europe (and the United States), often, shy away form evoking an Islamic Reformation and they are more used to talking to official representatives of Islam or to the Powers in place. Yet, Napoleon’s recipe looks inevitable if Europe (and the the United States) are to avoid a “religious Cold War” with its sporadic outbursts of terrorist or terrorist-suicide operations- a phenomenon most observers agree is on the rise.

Muslim reformers are there. The West should listen to their cry and give them a hand.